The clock was turned back to 1968  at a London cinema this week as part of the culmination of a three-year project by UCL academics to record, analyse, archive  and publicise the memories of almost a thousand people across the UK about what it was like to go to the cinema in the 1960s. 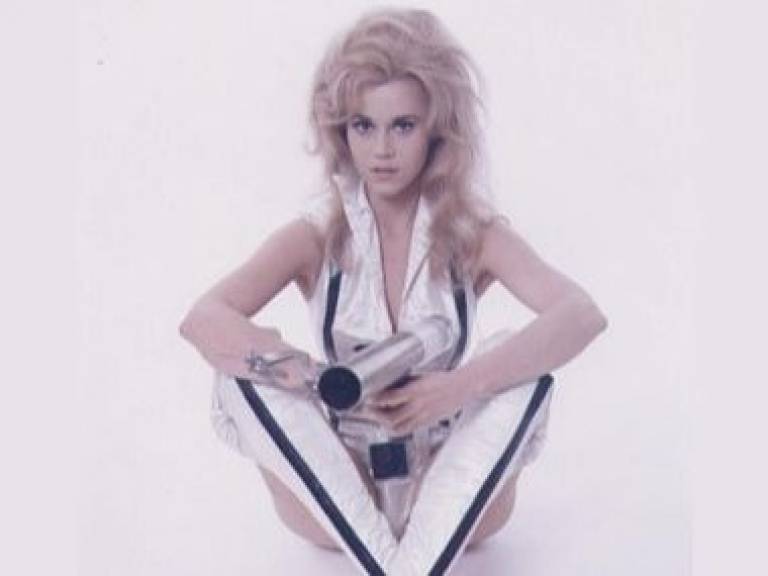 Barbarella, the iconic Jane Fonda film of 1968, was screened alongside newsreel, ads and cartoons from the period while members of UCLU Drama Society played the parts of 1960s usherettes in 1960s costumes at the Prince Charles Cinema in Leicester Square on Tuesday, January 23.

The aim was to give the public a flavour of what the academics discovered in the project which has resulted in a huge digital collection of material, including more than 900 questionnaires and 70 in-depth interviews with people recalling their memories of going to the cinema in the 1960s.

People can access the collection in the UCL Library to read and see detailed experiences of cinema in their locality, providing a unique social commentary on one of the most popular community activities in 1960s Britain.

The research team, led by UCL Professor of Film History Melvyn Stokes and Dr Patrick Glen, have put on or are in the process of running 44 similar public events, lectures and workshops around Britain to publicise the research findings. There will also be a book based on the project.

Professor Stokes said one key finding of the original project, called Cultural Memory and British Cinema-going of the 1960s and funded by the Arts and Humanities Research Council (AHRC), was the importance of cinema as a focal point for chronicling people's social experience of the 1960s.

"People don't tend to remember the stars, it's the social experience they recall," he said. "It's who they go with, what they did afterwards and how it fits into the general tenor of their lives."

As well as 24 events with local organisations such as U3A libraries, nine with schools and 8 with members of Local BAME and LGBT groups, there are three "immersive 60s cinema" events like this week's screening of Barbarella in London's West End.

"When you get a bunch of people who remember the 1960s in a room and show them it with immersive cinema, all their memories come flooding back," said Professor Stokes. "One woman came up to me afterwards and said she had not intended to stay for the discussion because she didn't have any memories of the 1960s. By listening to everyone else, her memories came back."

Among the troves of historical moments recaptured were some of the first Bollywood movies provided at The Scala in Charlotte Street courtesy of the Indian High Commission Indian families would make it a family and community event, bringing food and drink.

People also gained some of their first insights on life in Europe through the surge in European subtitled films coming to Britain, opening new windows on Europe to 1960s Britons.

At one event in Leyburn, Yorkshire, when one of the audience members recalled the problem they had with abusive men sitting next to them in the cinema, others opened up about similar experiences. "As soon as sexual harassment was mentioned, many nodded," said Professor Stokes.

At another event in the Wirral, members of the audience recalled children's matinees, where a cinema employee would turn up and spray the auditorium with the insecticide DDT, possibly to combat fleas or head lice.

In Scotland, the seats at the back of the cinema which were joined together by the removal of arm rests for lovers to snuggle up were known as "chummies".

There was also a theme that people's memories of films were error-ridden. In Lawrence of Arabia, memories tended to focus on Peter O'Toole riding out of the desert when in fact, it was Omar Sharif. Or in Alfie, people's recollection was of a young man making out with a lot of women, when, in fact, it was more about loneliness.

The idea of an immersive cinema experience turning the clock back to the 1960s was trialled last July in a performance at the Theatre Royal in Wakefield, Yorkshire organised with the local Civic Society.

The performance of Barbarella at the Prince Charles cinema took the audience back to October 1968 when the film was released in the UK. It was the heyday of 1960s political protest with the anti-establishment mood epitomised by hippies and by London's underground arts and music scene.

That summer, American athletes Tommie Smith and John Carlos had shaken the world with their black power protest salute on the winners' podium at the Mexico City Olympics, while in London an anti-Vietnam protest had turned into a riot outside the US embassy in Grosvenor Square, London.

At the cinema on Tuesday, the audience were offered the chance to sample the delights of 1960s-style boiled sweets, shake-in-the-bag crisps and Kia Ora before the film. There was, however, one difference from 1968. Modern health and safety rules dictated that the cigarette-filled auditorium that audiences in 1968 most likely experienced were not be allowed.