Scientists on the Dark Energy Survey (DES), which includes UCL researchers, announce their first three years of data including information on about 400 million astronomical objects such as distant galaxies billions of light years away as well as stars in our own galaxy. 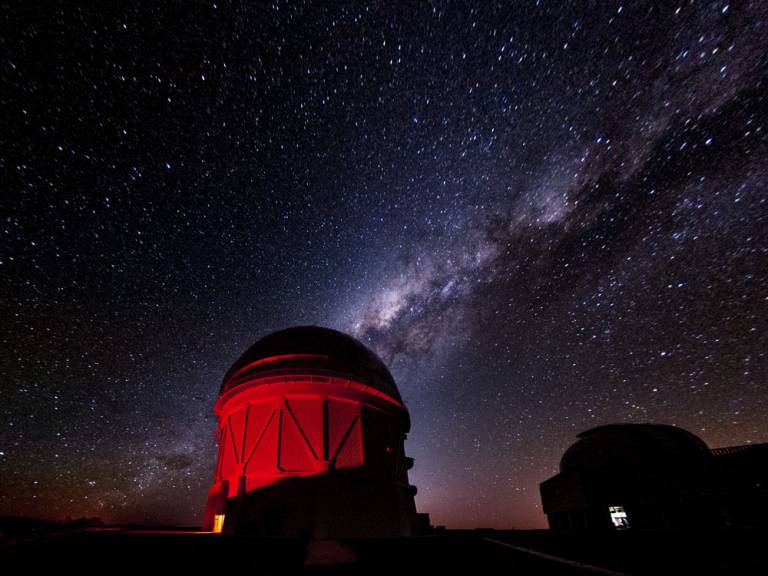 DES scientists are using this data to learn more about dark energy, the mysterious force believed to be accelerating the expansion of the universe. They presented some of their preliminary cosmological findings in a special session held during the American Astronomical Society meeting in Washington, D.C. which includes the discovery of eleven new stellar streams, remnants of smaller galaxies torn apart and devoured by our Milky Way.

UCL has played key roles in both science and instrumentation of DES for over a decade with funding from the Science and Technology Facilities Council.

Professor Ofer Lahav (UCL Physics & Astronomy), who chairs both the DES Advisory Board and the DES:UK consortium of seven universities, and co-directs UCL's CDT in Data Intensive Science, said: "This data release is a milestone in this major galaxy survey. The best Cosmology and non-Cosmology results from DES are still to come from this and the final big data sets. This a great example of data intensive science."

The public release of the first three years of DES data fulfills a commitment scientists on the survey made to share their findings with the astronomy community and the public. The data cover the full DES footprint - about 5,000 square degrees, or one eighth of the entire sky - and include roughly 40,000 exposures taken with the Dark Energy Camera. The images correspond to hundreds of terabytes of data and are being released along with catalogs of hundreds of millions of galaxies and stars.

"There are all kinds of discoveries waiting to be found in the data," said Dark Energy Survey Data Management Project Scientist Brian Yanny of the U.S. Department of Energy's Fermi National Accelerator Laboratory. "While DES scientists are focused on using it to learn about dark energy, we wanted to enable astronomers to explore these images in new ways, to improve our understanding of the universe."

One new discovery enabled by the data set is the detection of eleven new streams of stars around our Milky Way. Our home galaxy is surrounded by a massive halo of dark matter, which exerts a powerful gravitational pull on smaller, nearby galaxies. The Milky Way grows by pulling in, ripping apart and absorbing these smaller systems. As stars are torn away, they form streams across the sky that can be detected using the Dark Energy Camera.  Even so, stellar streams are extremely difficult to find since they are composed of relatively few stars spread out over a large area of sky.

"It's exciting that we found so many stellar streams," said astrophysicist Alex Drlica-Wagner of Fermilab. "We can use these streams to measure the amount, distribution, and clumpiness of dark matter in the Milky Way. Studies of stellar streams will help constrain the fundamental properties of dark matter."

"We're interested in these streams because they teach us about the formation and structure of the Milky Way and its dark matter halo. Stellar streams give us a snapshot of a larger galaxy being built out of smaller ones," said Shipp. "These discoveries are possible because DES is the widest, deepest and best-calibrated survey out there."

DES plans one more major public data release, after the survey is completed, which will include nearly twice as many exposures as in this release.