UCL has mounted a meticulously-planned operation to enable its spiritual forebear Jeremy Bentham to achieve in death what he always wanted to do in life: visit America. 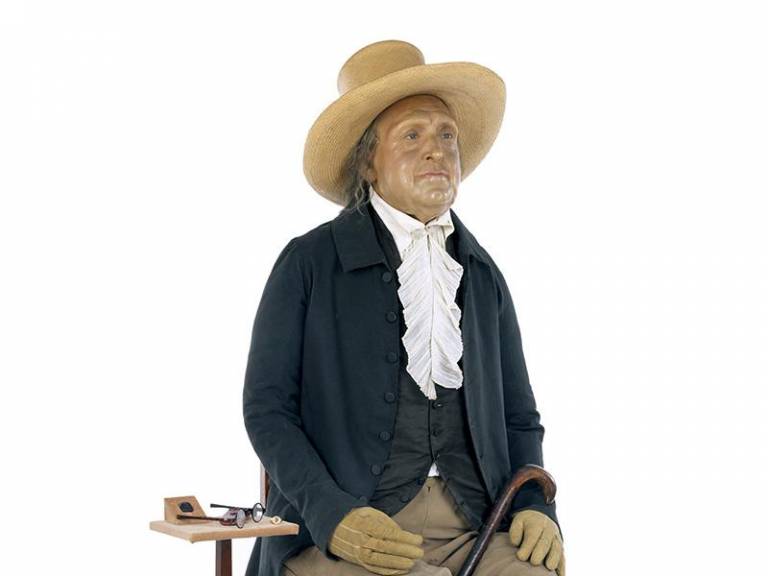 For the first time since the philosopher's death more than 180 years ago, his auto-icon - comprising his skeleton, wax head, clothes, hat, chair and walking stick - is to leave UCL and be transported abroad to the US to go on display at the Met Breuer museum in New York from March to July.

Bentham will be part of The Met's exhibition, "Like Life: Sculpture, Color and the Body, 1300-now", which will bring together sculptures by artists from Donatello, El Greco, Auguste Rodin and Edgar Degas to Louise Bourgeois, Jeff Koons and Yinka Shonibare.

The exhibition, featuring international loans alongside works from the Met's own collections, will document 700 years of sculptural practice from 14th century Europe to the present. Bentham will be a centrepiece in a glass case alongside masterpieces and little-seen works.

It was always Bentham's ambition to go to America but one he never achieved. Before his death on June 6 1832, however, he laid down in his will the terms of his continued "life" as an auto-icon, allegedly carrying around in his pocket at the end of his life the glass eyes to be used after he died.

In his will, he implored his "dear friend" Doctor Southwood Smith to ensure "the skeleton…be put together in such a manner as that the whole figure may be seated in a chair usually occupied by me when living, in the attitude in which I am sitting when engaged in thought."

Now, to ready him for the departure next month (March), he has undergone a full inspection and spring clean. The auto-icon, which is normally seated in the South Cloisters and is said to be UCL's most popular museum exhibit, has been stripped down to his underwear for the first time for more than 20 years. It is thought the only time before that may have been during the war.

In doing so, it has revealed secrets only museum conservators from UCL's past knew. Jayne Dunn, who as Head of Collections Management at UCL masterminded the operation, said: "There are two central support rods which run down either side of the spine that hold the skeleton together. All the limbs hang from that central armature. Each bone is tied to the next bone by a complicated steel net and pins. All of it was done by the original people after his death.

"He is wearing the original underwear (which has not got infested) and two sets of stockings, one over the other. That might have been the fashion then. Over the top he has a vest which is the original."

The skeleton is padded with linen tow, which resembles wood wool, held in place by a large stockinet over the body which was replaced in the 1990s after being damaged by an infestation. It is thought the original jacket and trousers were also replaced in the Second World War by UCL curator Violette Lafleur after being eaten by pests. "Carpet beetles love wool but they are less keen on linen which is why we think the vest, underpants and stockings have survived," said Dunn.

Indeed, the first task was to check Bentham for infestations. "We don't want to send an object to another museum and infect their collection with pests. The first thing we had to do was to discover whether he was suffering from any infestations. If he had been we would have had to fumigate him," said Dunn.

Bentham's stuffing had also lost its shape with a large lump protruding from his back which required remedial work. "When you have an old sofa everything settles into the bottom and you have to plump up the cushions," said Subhadra Das, a Curator at UCL. "Well the same thing happened with Bentham. We have not added anything but reapportioned where it is so he looks a lot slimmer. He has a strong core now."

Dunn and Das took advice from specialist art transporters on the safest way to pack Bentham. He is to be placed on his back in a seated position to minimise stress on the fragile bones. "They recommended we should put him in a seated position to cause less stress to his bones. His pelvis is the weakest point. The wiring, which we think is original, is also very fragile," said Dunn.

One crate, shaped inside like a chair, will be used for Bentham, while a separate crate will carry his coat as well as his hat, wax head, chair and cane - all of which are thought to be the originals. "One of the things that made him eccentric is that he gave names to things, so he called his walking stick Dapple, or Dobbin," said Das.

"His tom cat was a member of the Church of England and was known as the Reverend John Langhorne. His final eccentricity is his auto-icon, and he wrote a pamphlet before his death in relation to having his body preserved. In it he outlined his motives, and said, 'when Bentham has ceased to live… whom shall the Bentham Club have for its chairman? Whom but Bentham himself? The final preparations for his departure will begin in early March when he comes off display at UCL. Dunn and Emilia Kingham, a UCL conservator, specialising in human remains, natural history and wet specimens, will travel with the crated auto-icon to New York.

The last loan of any part of the auto-icon was in the 1990s when the wax head atop a mannequin went to Germany. Bentham had originally hoped his head would be retained on his body but the preserving process, when it was suspended over sulphuric acid to melt the brain, resulted in grotesque discolouration of the face.

The French artist Jacques Talrich was enlisted to create a wax head, which he did working from the discoloured original and a bronze medallion. The original head was, rumour has it, found in body cavity when Violette Lafleur opened up the auto-icon during the Second World War.

The head which has the glass eyes went on display last year for the first time in decades as part of an exhibition at UCL looking at death and preservation. The exhibition is to close with a wake on February 15, Bentham's 270th birthday, where eight people will present three-minute provocations considering his legacy and the nature of death.

The UCL team has also taken the opportunity provided by the preparation to carry out tests including taking a DNA sample from his finger bone tips. Previous anaylsis of a sample from his tooth has shown he had good oral health, potentially the result of having a good dentist.

The exhibition at the Met is being curated by Luke Syson, previously a curator at the British museum and National Gallery. Bentham is seen as a key element in the exhibition, which will explore the use of wax as the most favoured way of expressing flesh whether for entertainment or scientific purposes. Bentham will be acenterpiece of the section on reliquaries and the use of human materials such as hair.