Scientists at UCL have explained for the first time the mystery of why adhesive tape is so useful for graphene production. 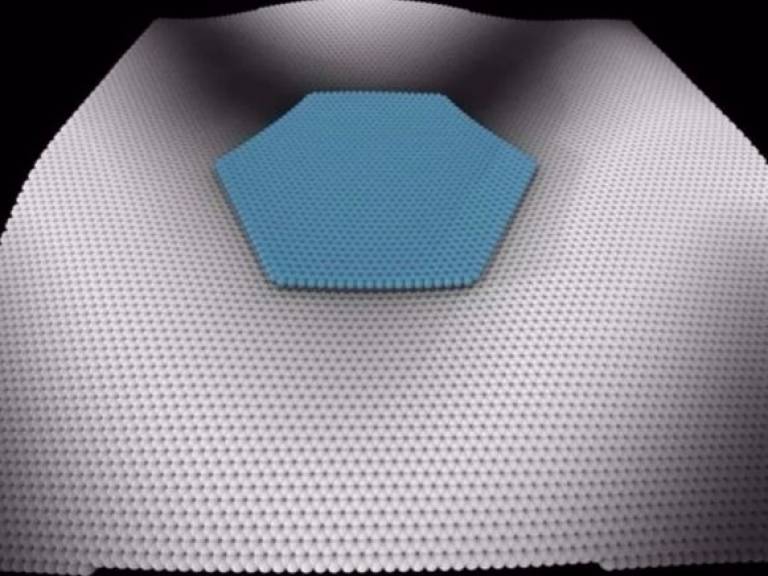 The study, published in Advanced Materials, used supercomputers to model the process through which graphene sheets are exfoliated from graphite, the material in pencils.

Graphene is known for being the strongest material in the world, lightweight and with extraordinary electrical, thermal and optical properties. Unsurprisingly, it offers many benefits for commercial application.

Academics at UCL are now able to demonstrate how individual flakes of graphite can be exfoliated to make one atom thick layers. They also reveal that the process of peeling a layer of graphene demands 40% less energy than that of another common method called shearing. This is expected to have far reaching impacts for the commercial production of graphene.

"The sticky tape method works rather like peeling egg boxes apart with a vertical motion, it is easier than pulling one horizontally across another when they are neatly stacked," explained Professor Peter Coveney, Director of the Centre for Computational Science (UCL Chemistry).

"If shearing, then you get held up by this egg carton configuration. But if you peel, you can get them apart much more easily. The polymethyl methacrylate adhesive on traditional sticky tape is ideal for picking up the edge of the graphene sheet so it can be lifted and peeled," added Professor Coveney.

Graphite occurs naturally, its basic crystalline structure is stacks of flat sheets of strongly bonded carbon atoms in a honeycomb pattern. Graphite's many layers are bound together by weak interactions and can easily slide large distances over one another with little friction due to their superlubricity.

The scientists at UCL simulated an experiment conducted in 2015 at Lawrence Berkeley Laboratory in Berkeley, California, which used a special microscope with atomic resolution to see how graphene flakes move around on a graphite surface.

The supercomputer's results matched Berkeley's observations showing that there is less movement when the graphene atoms neatly line up with the atoms below.

"Despite the vast amount of research carried out on graphene since its discovery, it is clear that until now our understanding of its behaviour on an atomic length scale was very poor," explains PhD student Robert Sinclair (UCL Chemistry).

"The one reason above all others why the material is difficult to use is because it is hard to make. Even now, a dozen years after its discovery, companies have to apply sticky tape methods to pull it apart, as the Laureates did to uncover it; hardly a hi-tech and industrially simple process to implement. We're now in a position to assist experimentalists to figure out how to prise it apart, or make it to order. That could have big cost implications for the emerging graphene industry," said Professor Coveney.