The National Institute for Health and Care Excellence (NICE) has given limited approval for suitable NHS patients to receive a new type of breast cancer treatment pioneered by UCL clinical scientists. 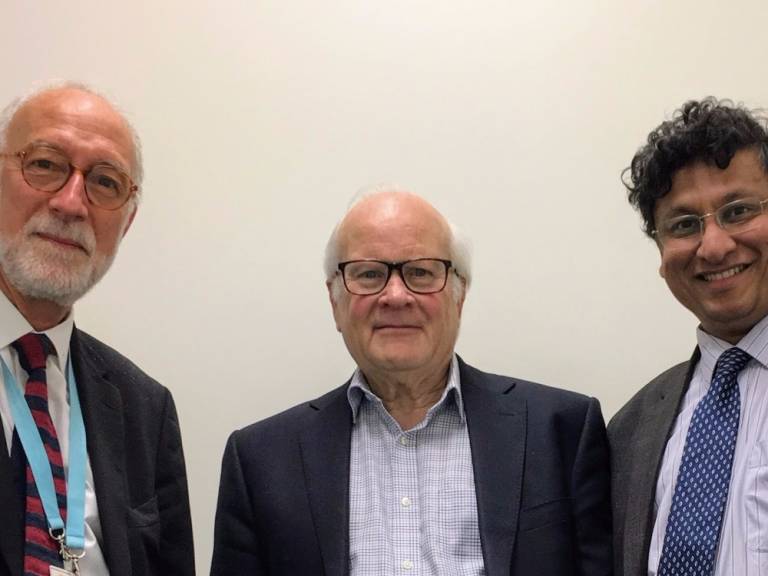 This will eventually benefit thousands of women and is already in use in many countries throughout the world.

It has recommended the use of a targeted "single-shot" radiation device - Intrabeam - during lumpectomy for early breast cancer in NHS centres which already have the technology and expertise.

This is an important step forward, even though the approach, now widely employed in over 350 centres in 35 countries, has not yet been given an unrestricted green light for use more widely within the NHS.

Lumpectomy is a surgical procedure whereby only the tumour and some surrounding tissue is removed, and is the preferred treatment for small cancers that the majority of patients present with. To minimise the risk of cancer coming back in the breast, three to six weeks of daily doses of radiation have traditionally regarded as essential.

The TARGIT IORT technique avoids the need this longer period of radiotherapy by instead administering a single 20- 35 minute dose of radiation directly into the surgical cavity (tumour bed), under the same anaesthetic, immediately after the tumour has been removed.

This treatment gives an immediate and precise radiotherapy dose in a single session. So when patients come round after surgery, the whole of the surgical and radiotherapeutic treatment has been completed in one go - done and dusted. Just a few patients - only around 20 %- will  require additional radiotherapy treatment after careful inspection of the surgical specimen, if unexpected high-risk pathological features are found.

Because the innovative and evidence-based treatment avoids up to six weeks of daily radiation, it means, according to Professor Vaidya, less toxicity, less travel, lower overall cost to the NHS, and fewer deaths from other cancers and heart attacks. He said it had potentially enormous benefits for breast cancer patients.

The NICE decision is the culmination of 20 years' research and work when Professor Vaidya first came up with the idea that radiotherapy should be focussed to just around the tumour, while working as a young oncologist at the Tata Memorial Hospital in Mumbai in the 1990s. At that time, he was looking for a way to help women who had to have their breasts removed in a mastectomy simply because they could not afford to stay in Mumbai for the six weeks that radiation would otherwise take.

Michael Baum, UCL Professor Emeritus of Surgery, Jeffrey Tobias, Professor of cancer medicine at UCL, and Professor Vaidya worked with the industry to develop the machine and used the TARGIT IORT technique for the first time on July 2 1998 in the Middlesex Hospital, UCL. A randomised trial of the technique  involving 3,451 patients from 33 centres in 11 countries compared TARGIT IORT with the traditional radiation therapy given daily over several weeks after the operation. The study has been published in two landmark papers in the Lancet, one of the world's top medical journals.

The trial found five year local recurrence when TARGIT was similar ("non-inferior") to traditional therapy. The outcomes were the best when TARGIT IORT was given during lumpectomy, under the same anaesthetic.

Breast cancer mortality with TARGIT was similar but mortality from other causes was significantly lower with TARGIT due to fewer deaths from cardiovascular causes and other cancers. The meta-analysis of randomised trials of targeted radiotherapy has confirmed that avoiding radiation of other organs improves overall survival: it is increasingly important to avoid treatment related toxicity particularly because the survival from breast cancer is now over 90-95%.

TARGIT IORT with Intrabeam is now available in more than 350 hospitals in 35 countries. Among those who have benefited from it is journalist Kirsty Lang, who was concerned that, as a freelance, she could not afford losing the six weeks required for the traditional radiation therapy.

Thanks to a previous investment in a Bupa discount scheme for BBC employees, she was able to be treated at Great Western Hospital in Swindon, one of six hospitals in the UK equipped with the right machinery. The UCL-affiliated hospitals Whittington and Royal Free, Guy's, Princess Alexandra and Royal Hampshire County Hospitals are the other NHS hospitals in England

Lang admitted she was "lucky because I'm alive, lucky it was caught early and lucky that I was able to avoid weeks of radiotherapy because I had private health insurance."

Writing last January, she did say the thing that made her angry was that the technology "isn't more widely available to women with early stage breast cancer on the NHS."

We can now say that it is, at least in the small group of hospitals which have the equipment and expertise.

Professor Baum said "When we started this work 20 years ago, people laughed at us. But now we know that it really does represent a great advance. It reminds me of the swing from mastectomy to breast preservation just a few decades ago".

In conclusion, Professor Vaidya felt justified in claiming "This NICE approval is a triumph of clinical science and evidence based medicine moving beyond the limits of conventional cancer treatment, for the benefit of a large group of patients."