Beaker culture in Britain came about through large-scale migration

Beaker pottery and culture spread through large-scale migration of people and through the exchange of new ideas, according to new research by an international team involving UCL scientists. 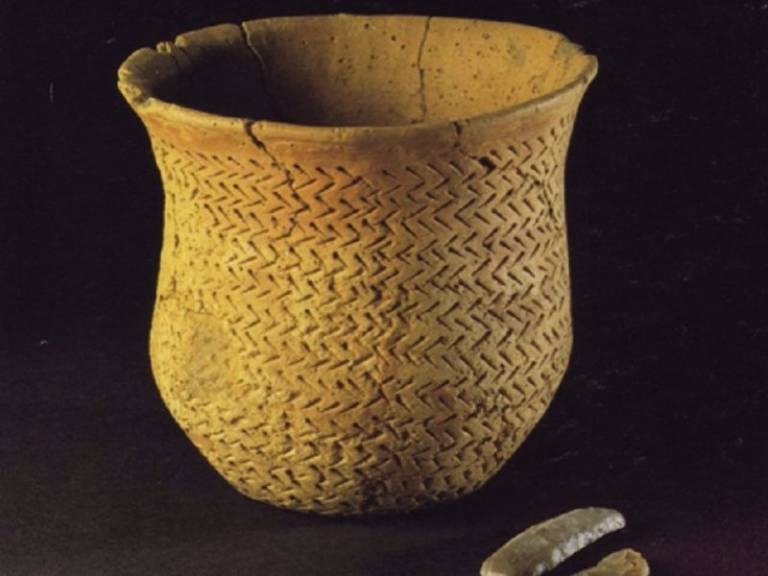 The study, published in Nature, involved analysis of ancient-DNA data from 400 prehistoric skeletons drawn from sites across Europe. It is the largest study of ancient human DNA ever conducted.

The Beaker culture is a complex cultural phenomena which started 4,700-4,400 years ago, when a new bell-shaped pottery style spread across western and central Europe. For over a century, archaeologists have tried to establish whether the spread of 'Beaker' pottery, and the culture associated with it, represented a large-scale migration of people or was simply due to the exchange of new ideas.

Scientists have now found that the culture of producing beakers spread between Iberia and central Europe without significant movement of people. But the Beaker culture spread to other places carried by large-scale human migration, and this is most notable in Britain.

DNA analysis of skeletal remains show that Britain went through a 90% shift in its genetic make-up after the Beaker people arrived. This revelation suggests that the Beaker people almost entirely replaced the island's earlier inhabitants, Britain's Neolithic farmers, who were responsible for huge stone monuments, including Stonehenge.

"The sheer scale of population replacement in Britain is going to surprise many, even though the more we learn from ancient DNA studies, the more we see large-scale migration as the norm in prehistory, said co-author Professor Mark Thomas (UCL Genetics, Evolution and Environment).

"The big question now is how could such a massive population replacement happen? Did the incoming Beaker people have better technologies, social organization, or ways of feeding themselves? Or were the early British farmers they mostly replaced already on the slippery slope to population collapse? These are questions only archaeologists can answer," added Professor Thomas.

The study reports on 155 samples from Britain ranging in age from between about 6,000 and 3,000 years ago, a period and place from which there has previously been no published data.

"For the first time we are dealing with sample sizes that are similar to those in genetic studies of present-day people. The large sample sizes make it possible to paint subtler pictures of ancient human variation than we could before," said geneticist Professor David Reich, a co-senior author at Harvard Medical School in Cambridge, US.

"This is just the beginning of what we can find out about the Beaker people and others in prehistory. Soon we'll be able to reconstruct their marriage and kinship patterns, their population demography and many other aspects that we never thought we'd have answers for," said Professor Michael Parker Pearson (UCL Institute of Archaeology).

"And there are big implications for understanding why Stonehenge's great stones went up immediately before the Beaker people arrived - maybe it was an attempt to forge unity in the face of imminent change. All sorts of new possibilities are opening up - it's a great time to be an archaeologist," added Professor Parker Pearson.

This study was conducted by an international team of 144 archaeologists and geneticists from institutions in Europe and the United States. Research conducted at UCL was funded by the Wellcome Trust.