People who hold radical political views – at either end of the political spectrum – aren’t as good as moderates at knowing when they’re wrong, even about something unrelated to politics, finds a new UCL study. 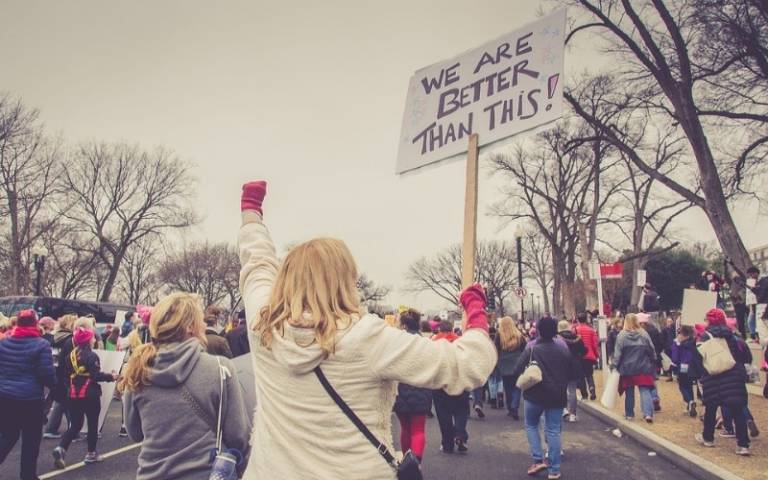 The experimental study, supported by funding from the Wellcome Trust and the Royal Society, used a simple perceptual task, and the researchers found no difference between the groups on task performance, but noted that people with more radical beliefs tended to overestimate their certainty on incorrect answers, according to the findings published in Current Biology.

“We were trying to clarify whether people who hold radical political beliefs are generally overconfident in their stated beliefs, or if it boils down to differences in metacognition, which is the ability we have to recognise when we might be wrong,” said lead author Dr Steve Fleming (Wellcome Centre for Human Neuroimaging, UCL Queen Square Institute of Neurology).

“We found that people who hold radical political beliefs have worse metacognition than those with more moderate views. They often have a misplaced certainty when they’re actually wrong about something, and are resistant to changing their beliefs in the face of evidence that proves them wrong.”

For the study, 381 people (in addition to 417 people in a second experiment which replicated the findings) initially completed a survey gauging their political beliefs and attitudes towards alternative world views. People on both the far left or far right of the political spectrum tended to have more radical views, involving authoritarianism and dogmatic intolerance for opposing views.

The participants then completed a simple perceptual task requiring them to look at two sets of dots and judge which one had more dots. They were then asked to rate how confident they were in making their choice, and were incentivised to judge their confidence accurately with a monetary reward.

The experiment was designed to test people on a task completely unrelated to politics, to hone in on cognitive processes without any political motivations.

People with more radical beliefs performed similarly on the task to moderates, but they tended to give higher confidence ratings when they had made incorrect choices than moderates did. Radicals’ confidence on correct answers was similar to that of moderates.

A second stage of the study assessed how participants took in new evidence. After making a judgement on the dots task, participants were shown another set of dots as ‘bonus’ information about the correct answer, before making their confidence judgment. If they had made an incorrect choice, the next set of dots should have weakened their confidence in their choice – which it did for moderates, but not as much for people with radical political views.

“The differences in metacognition between radicals and moderates were robust and replicated across two data sets, but this self-knowledge ability only explained a limited amount of the variance in radicalism. We suspect that this is because the task is completely unrelated to politics - people may be even more unwilling to admit to being wrong if politics had come into play,” said PhD student Max Rollwage (Wellcome Centre for Human Neuroimaging and Max Planck UCL Centre for Computational Psychiatry & Ageing Research), first author of the paper.

The researchers highlight that previous studies have found no relationship between metacognition and general intelligence, suggesting the differences in radicals are unlikely to be due to overall changes in cognitive ability.

“An important point is that our findings held true among participants with radical views at either end of the political spectrum – radicalism appears to reflect a cognitive style that transcends political inclinations,” said co-author Professor Ray Dolan (Wellcome Centre for Human Neuroimaging and Max Planck UCL Centre for Computational Psychiatry & Ageing Research).