Britain's first female doctor, the first female winner of the Turner Prize and the first black woman to play for England Women's cricket team are among 12 exceptional women that have been honoured in individual portraits, as part of UCL’s Female Firsts art project. 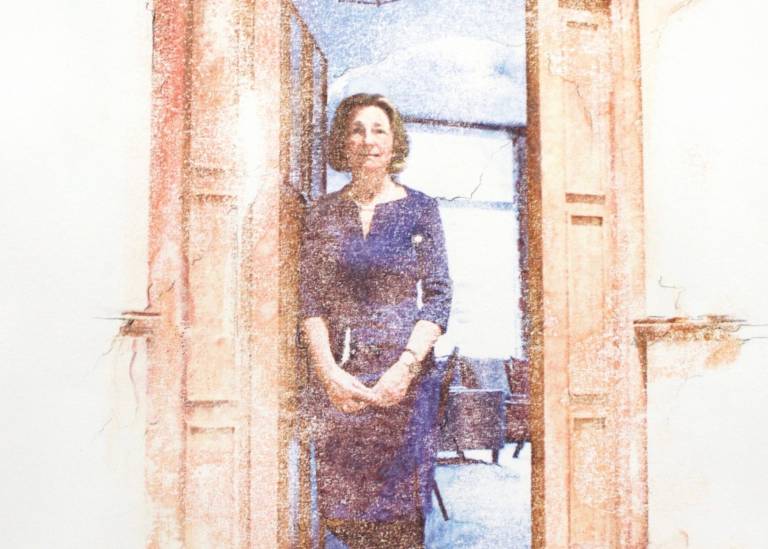 ‘Female Firsts’ by UCL Artist-in-Residence Kristina Clackson Bonnington celebrates women who made significant advancements in their fields and paved the way for other women.

Since March, three artworks have been on display rotating on a three month basis. Now for the first time all twelve artworks will displayed to the public in the South Cloisters of UCL’s Wilkins Building.

The exhibition opening on 14 December coincides with the centenary of women’s first vote in a UK general election.

Female Firsts is a truly collaborative project spanning across university disciplines. Professor Judith Stephenson and the UCL Elizabeth Garrett Anderson Institute for Women’s Health facilitated the project and commissioned and hosted multidisciplinary artist Kristina to produce the twelve artworks and co-direct on the project.

“When I learned that the first woman to win the Turner Prize had studied at the UCL Slade School of Fine Art, I was curious to discover more ‘UCL Female Firsts.’ This led to a UCL wide endeavour to explore the impact and legacy of twelve exceptional women and chart progress towards gender equality,” said Professor Judith Stephenson (UCL EGA Institute for Women’s Health).

The twelve women were chosen from a selection of inspiring women nominated by Faculties from across UCL by a judging panel of staff, students and alumni.

Working with both the selected women and institutions associated with them, Kristina has collaborated with a large external team to explore the roles and spaces that these exceptional twelve women occupied.

Each portrait depicts the women in a selected ‘doorway’. Using a lab-based technique that burns images onto surfaces, Kristina references the scientific, cultural and social advancements made by each woman.

The twelve women, who reflect the breadth of subjects spanned by UCL, are:

UCL Provost & President, Professor Michael Arthur, said: “UCL Female Firsts provides eye-opening insight into the barriers women have faced at UCL and in the wider world, and how far they were able to reach despite them. It is also an important opportunity to examine where equality is still to be achieved and learn from the past. I’m delighted that UCL is playing such an active role in celebrating this centenary year, and I think it will provoke a lot of debate about how far we have come and how far we still need to go.”

Kristina has worked at UCL since 2014 when she began working on the large-scale, participatory project House of Doors. Fusing social history with action research and sculpture, House of Doors was launched at UCL in 2015 and explores how society has changed since women first won the right to vote in 1918. House of Doors was exhibited at The Houses of Parliament in 2018 attracting an estimated 50,000 plus visitors, and UCL Female Firsts develops key themes from this work.

UCL Artist-in-residence Kristina Clackson Bonnington, said: "It is an enormous privilege to be working on Female Firsts. By focusing on twelve sites of change it is possible to better appreciate both the struggle for and progress made towards achieving gender equality. Almost 150 years after Elizabeth Garrett Anderson became the first female doctor to qualify in Britain, Clare Marx became the first female President of The Royal College of Surgeons. Since the first women got the vote in 1918, door after door has been opened, but there are still so many public roles yet be occupied by women.

“Projects such as this can be a catalyst for social change; for the thousands of students at UCL who regularly walk past this prominent exhibition space, what they see on these walls matters. Putting the remarkable efforts of these women at the heart of UCL's site is an opportunity to encourage this wonderful community to create a more equal society where more female firsts can be achieved."