A UCL-led study has confirmed that some vials of a hormone used in discontinued medical treatments contained seeds of a protein implicated in Alzheimer’s disease, and are able to seed amyloid pathology in mice. 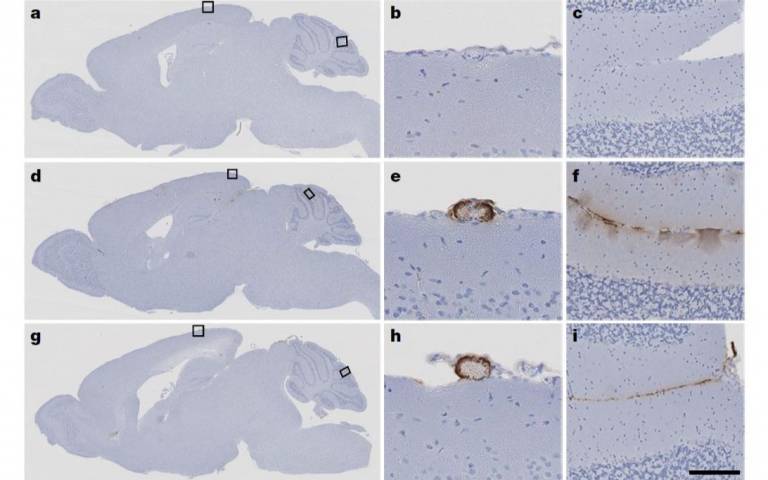 The research, published in Nature, follows on from the team’s 2015 study that found evidence of amyloid pathology in people who had developed Creutzfeldt-Jakob disease (CJD) following treatments with human growth hormone extracted from large pools of pituitary glands removed from deceased individuals at autopsy.*

Amyloid pathology involves a build-up of brain proteins known to cause Alzheimer’s disease.

This new research confirms that certain batches of this hormone did indeed contain seeds of the amyloid beta protein and found, in a new experimental study, that the hormone batches transmitted amyloid pathology to laboratory mice.

The findings support the team’s hypothesis that amyloid beta was accidentally transmitted to patients via this long since discontinued medical treatment.

“Our earlier study found that some individuals who developed CJD many years after treatment as children with cadaver-derived human pituitary growth hormone also had deposits in the brain of a type of aberrant protein characteristic of Alzheimer’s disease,” said the study’s lead author, Professor John Collinge (MRC Prion Unit and UCL Institute of Prion Diseases).

“We suggested that the human growth hormone – which prior to 1985 was prepared from human tissue - may have been contaminated with seeds of this material as well as the prions causing CJD. Our latest findings now confirm that some archived batches of this hormone did indeed contain seeds of the amyloid beta protein found in Alzheimer’s disease.

“It is most important to emphasise that there is no suggestion in our work that you can catch Alzheimer’s disease (or indeed CJD) by contact with a person with the disease. Our findings highlight the need to do further research in this area.”

The 2015 findings linked childhood growth hormone injections transfusions to amyloid pathology in adults, by studying autopsied brains from eight people who had died from CJD.

All eight people whose cases were described in the 2015 paper had previously been treated with cadaveric pituitary-derived human growth hormone (c-hGH), which up until 1985 had been used to treat various causes of short stature before concerns were raised about transmission of the prions (seeds of misshapen prion protein) that cause CJD. The use of cadaveric c-hGH was then discontinued and replaced with synthetic hormone that did not carry the risk of transmitting CJD.

Six of the people who died were found to have amyloid pathology in brain tissue, four of whom also had some degree of cerebral amyloid angiopathy (CAA), a disease involving the build-up of amyloid beta in blood vessels in the brain (which can cause bleeding in the brain). CAA is also seen to some degree in most patients with Alzheimer’s disease. None of these CJD patients had developed the full picture of Alzheimer’s disease at the time of their death from CJD.

A diagnosis of Alzheimer’s disease requires detection of both aberrant proteins, amyloid beta and tau.

The researchers then tested whether this material was capable of seeding pathology by injecting samples from the hormone vials into laboratory mice that had been genetically modified to be prone to the amyloid beta pathology seen in Alzheimer’s disease (the mice used in the study were not prone to tau).

The findings demonstrate that the original c-hGH batches contained amyloid beta proteins that can seed amyloid pathology in mice, even after decades of storage.

“We have now provided experimental evidence to support our hypothesis that amyloid beta pathology can be transmitted to people from contaminated materials,” said Professor Collinge.

“We cannot yet confirm whether medical or surgical procedures have ever caused Alzheimer’s disease itself in people, or how common it might be to acquire amyloid pathology in this way.”

“It will be important to review risks of transmission of amyloid pathology by other medical procedures still done today, including instruments used in brain surgery, drawing on other research and what we already know about accidental CJD transmission,”** he added.

“While we are concerned about what this could mean about how amyloid pathology might be transmitted, we also aim to understand more about the cause and consequences of amyloid beta deposition in the brain and its relationship to tau aggregation, the other hallmark for Alzheimer’s disease,” said co-author Dr Silvia Purro (UCL Institute of Prion Diseases).

Dr Rob Buckle, Chief Science Officer at the Medical Research Council, which funded the study, said: “This study provides new insights into the molecular mechanisms underlying the role of amyloid in Alzheimer's disease. However, these experiments were in mice predisposed to develop Alzheimer’s disease pathology and there is currently no evidence that AD can be transmitted between people.”

The study was principally funded by the Medical Research Council with support from the National Institute for Health Research, and involved researchers at the MRC Prion Unit at UCL, UCL Institute of Prion Diseases; Brigham and Women’s Hospital and Harvard Medical School; and RIKEN Center for Brain Science, Japan.