First ever acceleration of electrons in a proton-driven plasma wave

Electrons have been successfully accelerated at CERN using a wave generated by protons zipping through plasma, report UCL scientists as part of the AWAKE collaboration. 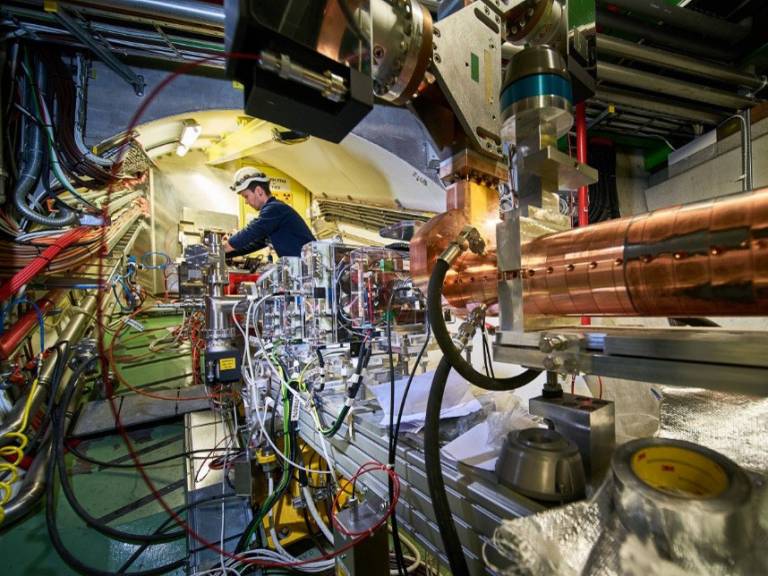 The achievement, published today in Nature, paves the way for an entirely new range of particle physics experiments at higher energies and lower cost.

"We have accelerated particles to greater energies and over shorter distances than is possible with current technology, which could result in accelerators of much reduced length and therefore cost," explained Professor Matthew Wing (UCL Physics & Astronomy), Principle Investigator of AWAKE-UK and the Deputy Spokesperson for the overall AWAKE collaboration.

"This is a crucial next step in achieving high-energy collisions to probe the fundamental laws of nature."

First proposed in the 1970s, plasma waves - or wakefields - were thought to have the potential to drastically reduce the size of accelerators in the next several decades.

AWAKE, which stands for Advanced WAKEfield Experiment, was set up as a proof-of-principle compact accelerator project for accelerating electrons to very high energies over short distances.

UCL has contributed significantly to AWAKE and today's discovery by delivering the magnetic spectrometer, the key instrument used to measure the accelerated electrons, from design through to final data analysis and publication.

"It has been five years since we first started tackling the problem of measuring our accelerated electrons," said Dr Simon Jolly (UCL Physics & Astronomy), the designer of the AWAKE spectrometer.

"To be able to observe electron acceleration using our instrument is deeply fulfilling and testament to the efforts of the team who worked on it."

In AWAKE, rubidium is heated to convert it into a gas which is then ionised with a laser beam to form a special state of matter called plasma. A proton beam called the 'drive beam' is injected along with the laser pulse and causes the plasma to oscillate in a wavelike pattern, much like a ship moving through the water generates oscillations in its wake.

Protons within the drive beam come to AWAKE with an energy of 400 GeV (billion electronvolts) from CERN's Super Proton Synchrotron, which is the last accelerator in the chain that delivers protons to the Large Hadron Collider.

A beam of electrons called the 'witness beam' is injected at a slight angle into the oscillating plasma and gets accelerated by surfing the plasma waves. On 26 May, the AWAKE collaboration successfully accelerated witness-electrons for the first time.

"The principle by which we can observe these accelerated electrons in our spectrometer is a simple one," said Dr Jolly.

"Electrons bend in a magnetic field and high energy electrons bend less than low energy ones. The spectrometer magnet spreads out the electrons depending on their energy: they then hit a screen, causing it to glow. From the resulting light pattern we can see what energy our electrons have been accelerated to."

While previous experiments of wakefield acceleration have relied on using electrons or lasers to drive the wake, AWAKE is the world's first to use protons.

"Drive beams of protons penetrate deeper into the plasma than drive beams of electrons and lasers," said Professor Allen Caldwell from the Max Planck Institute for Physics in Germany, Spokesperson of the AWAKE collaboration.

"Therefore, wakefield accelerators relying on protons for their drive beams can accelerate electrons for a greater distance, consequently allowing them to attain higher energies."

Professor Wing, concluded: "We are working on designing the next stage of the experiment to achieve higher energies, better beam quality and scalability to long lengths and, hence, higher energies.  The ultimate goal is to then apply this technology to new particle physics experiments in which the accelerator will be much reduced in length and cost."

Several UK research groups are part of the international AWAKE collaboration and are supported by the Science and Technology Facilities Council (STFC) within the AWAKE-UK project.

Professor Grahame Blair, Head of STFC's Science Programmes, said: "I would like to congratulate the AWAKE collaboration for this exciting result! AWAKE has successfully demonstrated that electrons can be accelerated to 2 GeV in just 10 metres by using a high energy proton beam as driver. The measured accelerating gradient is significantly higher than what can be achieved with conventional accelerators and has exciting prospects for an entirely new range of experiments and applications."