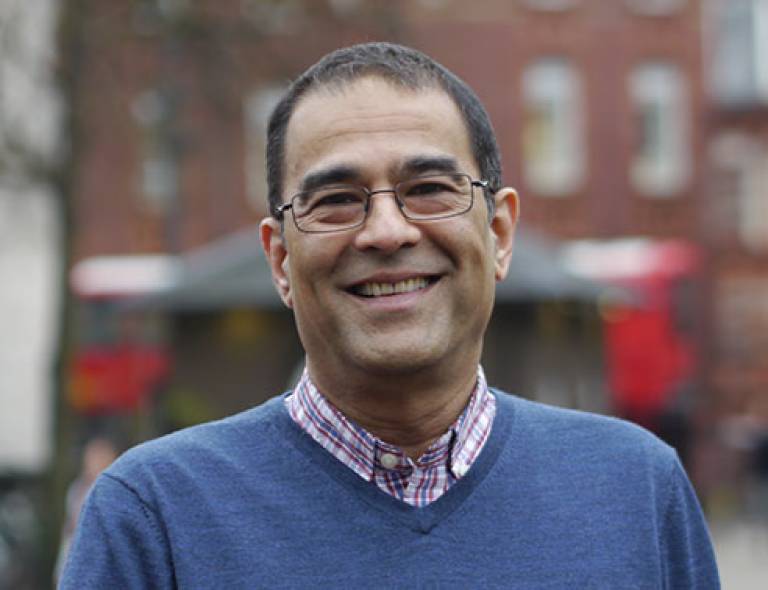 I am on secondment as an Equality, Diversity & Inclusion Manager in the UCL Equalities, Diversity & Inclusion (EDI) Team. My role involves working with individuals, groups and departments across UCL providing advice and practical support on EDI initiatives - I am getting to meet a lot of great people across campus; coordinating and advising on the Race Equality Charter (REC); doing desktop research, preparing reports and briefing papers for the development of equality policies and good-practice materials; analysing quantitative and qualitative data for action plans and monitoring; I review EDI literature/websites to keep current on legislative change and good practice and am starting to deliver EDI training, presentations and workshops.

I work with my colleagues in the EDI Team and stakeholders, such as UCL's equality networks, on the planning and delivery of equality events and that's just a typical Monday…

I've been at UCL since October 2011. Originally employed as the Student Funding Manager in Student & Registry Services (SRS) and responsible for UG, PGT and PGR scholarships and statutory funding. I also held the role of Departmental Equal Opportunities Liaison Officer (DEOLO) for SRS for two years and volunteered on equalities issues (Staff Disability Forum and the Disability Standard SAT) and was appointed as Co-Chair of the Enable Network just before joining the Equalities Team. Prior to UCL, I ran Student Support at Aston University (1999-2010), with responsibility for Financial Aid, the Disability Unit, International Student Support (including visa compliance, which I really don't miss!) and the Advisory in the Student Centre. I was also very active on equalities issues being a member of several steering groups for 10 years there.

From my previous employment, I think it would be that rare opportunity of establishing a new department from the ground up (Student Support), to a consistently top-three ranked department as well as delivering initiatives, which brought circa £700K to the university, which I ploughed back into supporting students. At UCL, I think my part in bringing in the Amos Bursary (and continuing to work with them in this new role), alongside re-purposing historic UCL hardship funds to create the current UCL Financial Assistance Fund (FAF). I am looking forward to being proud of our next Race Equality Charter submission in Feb 2019.

The main focus is to be my team's lead on UCL's Race Equality Charter submission over the coming year (we submit, as an institution, in February 2019).

Only 9 HEIs were awarded this charter mark out of 30 in the pilot and it is important to acknowledge the award was a recognition of our commitment having gone through a thorough analysis and having developed a robust action plan. The renewal therefore is about how we have delivered as an institution: the changes we can demonstrate. There is still a way to go but the progress, so far, has been genuine and significant in many ways. We plan to start sharing much of the incredible work which has been accomplished - our own community needs to become aware of the progress made and planned for the future.

My role is to guide and coordinate the process but it is the university as a whole (comprised of a great many dedicated individuals) who are to deliver meaningful and systemic change. So many people at UCL are involved in this process and my job is to reach out, see how progress can best be achieved, by working alongside these individuals. I will also be working on gaining some traction on involvement at a grassroots level from BME staff (and alongside the SU, BME students) and had a great time connecting with other students and staff at the recent BME Attainment conference. Dare I say, this is such an enjoyable and rewarding role because of the people I get to meet across campus (quite aside from a deep interest in equalities).

This is too difficult, my tastes are eclectic and choosing a single example is torture:

Film - The Color Purple, Fried Green Tomatoes, Passport to Pimlico, My Fair Lady, The Prince and the Showgirl, Jodhaa Akbar, LOTR/ the Hobbit, Black Hawk Down, The Name of the Rose and all the currently released Marvel movies (not-so-closet geek).

It's never too early to think about planning your retirement/ pension - but it can become too late!

Err… Jamie Lawson (singer/songwriter - Wasn't Expecting That) used to 'jam' in my bedroom in Plymouth in the mid 90's?

I have three actually: Vancouver, Canada - Grenada, Spain and the village of Torrin, on the bank of Loch Slapin, looking at Blavin in the Black Cuillin range.