Huge congratulations to the Huntington Disease Centre, UCL Institute of Neurology, which has won two 'Insight of the Year' awards from the Huntington Study Group. 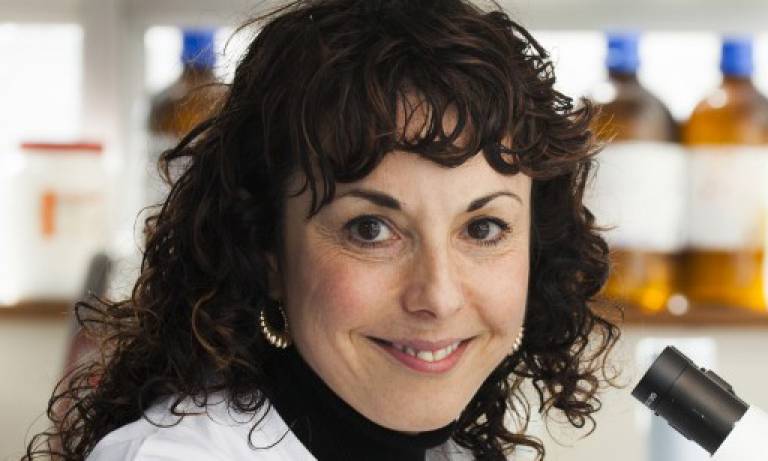 The HD Centre was recognised for two groundbreaking studies that were published separately by Lancet Neurology in June 2017.

The first study identified a blood test that can predict the onset and progression of Huntington's disease (HD). Two of the authors, Lauren Byrne and Dr Ed Wild, commented that the blood test, which measures a neurofilament light protein released from damaged brain cells, could help them design and run clinical trials of new HD treatments.

The second 'Insight' award was for a study which identified a genetic modifier associated with HD progression. The research team, which included Dr Davina Hensman-Moss and Professor Sarah Tabrizi (pictured at top of page), said that targeting this gene could lead to the development of life-extending treatments for HD patients.

The Huntington Study Group (HSG) is a US-based research organisation for clinical researchers, medical professionals, advocacy groups and others affected by HD. Its 'Insight of the Year' awards are judged by its journal editorial board and other researchers, who select the most influential paper in three categories.

Professor Ray Dorsey, Chair of HSG, stated: "HDInsights is pleased to recognize both these papers from UCL researchers and their colleagues. Together they bring us closer to developing treatments that make a difference for families affected by Huntington disease."

Dr Wild commented that it is a a remarkable achievement for the HD Centre to win two of the three HSG prizes in one year.

Commenting on the double win, Prof Tabrizi also said: "This international recognition of our research is a testament to UCL's vision in supporting the establishment of UCL HD Centre, and our mission of leading world-class research from bench to bedside that we hope will change the future for families affected by Huntington's disease and other neurodegenerative disorders."

The UCL HD Centre opened in March 2017 as a UCL IoN Research Centre. It is directed by Professor Tabrizi and co-directed by Professor Gill Bates. The Centre brings together expertise from many disciplines, making it uniquely placed to translate mechanistic insights into first-in-human studies in HD.

Huntington's disease is a fatal genetic neurological disease; it is currently incurable and there are no existing effective treatments to slow its progression. Around 10,000 people in the UK have HD, and a further 25,000 are at risk of the disease.