This week the spotlight is on Sr Mary Kenefick SMG, Catholic Chaplain to UCL. 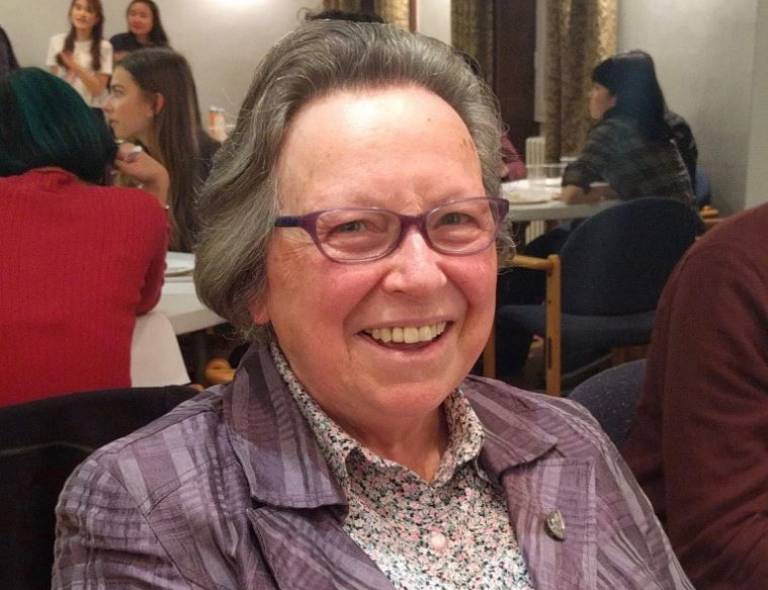 I am the Catholic Chaplain to UCL and Brunel University. My role involves supporting Catholic students and staff, helping them to become whole persons and find their goal and purpose in life and being open to the pastoral needs of all those at the universities, whatever their faith.

I have been Chaplain to UCL since 2006. Before that I was Chaplain to the British Army at Princess Royal Barracks, Guetersloh, Germany, where I was for 5 years.

Having successfully worked with Her Majesty's Forces.

A project very dear to me is embracing the pursuits and promoting the work of Venerable Mother Magdalen Taylor, founder of the Religious Congregation of the Poor Servants of the Mother of God at Fleet Street/Tower Hill in 1869/1872. She commenced this work to alleviate the physical and emotional sufferings of people in Dickensian London aided by Lady Georgiana Fullerton (1812-1885) the daughter of Granville Leveson-Gower, 1st Earl Granville.

Today we no longer appear to have such dire situations. Yet we have only to look at the current Evening Standard to be aware of the appalling situation of migrants and trafficked people in the UK.  'Would that someone would rise to plead the cause of the poor' Mother Magdalen Taylor uttered. It is my top priority to inspire our young people to appreciate their giftedness and to encourage and inspire them to make a difference on our planet wherever and however they can.

Seamus opens the newspaper and is shocked to see his OWN obituary.
In a panic, he phones his friend and asks: "Did you see the paper?!  They say I died!"
The friend replies: "Yes, I saw it! So where ya calling from?"

Worry less - there's not much that's worth the strain.

That I have a slightly mischievous sense of humour!