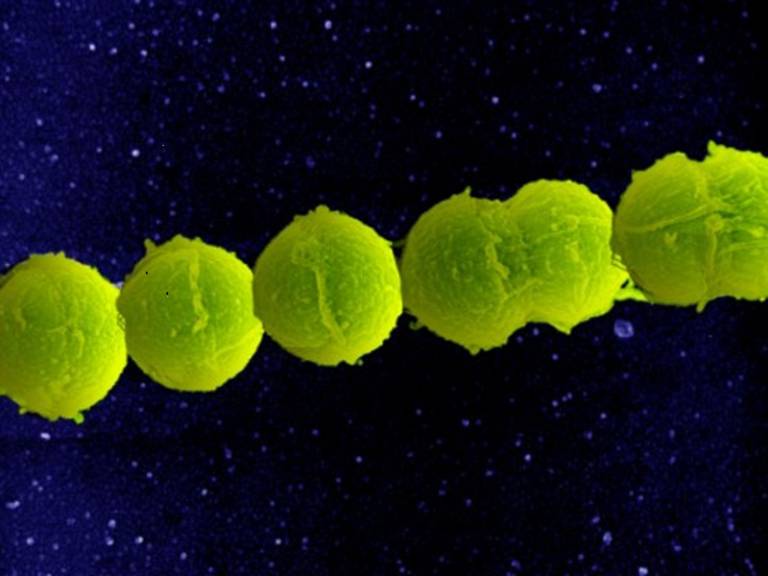 21.7 million pregnant women carry this bacteria according to the first global study of Group B Strep - most of them are currently unidentified and untreated. This study shows for first time that a maternal vaccine may prevent 231,000 infant and maternal GBS cases.

An estimated one in five pregnant women around the world carry Group B Streptococcus (GBS) bacteria which is a major, yet preventable, cause of maternal and infant ill health globally. These are the findings of a new research supplement published in the journal Clinical Infectious Diseases, and launched at the American Society of Tropical Medicine and Hygiene Annual Meeting in Baltimore.

Led by the London School of Hygiene & Tropical Medicine and involving more than 100 researchers from around the world including Dr Jennifer Hall from UCL, the series of 11 research papers conservatively estimates that out of 410,000 GBS cases every year, there will be at least 147,000 stillbirths and infant deaths globally¹. Despite being home to only 13% of the world's population, Africa had the highest burden, with 54% of estimated cases and 65% of stillbirths and infant deaths.

This first comprehensive study of the burden of GBS, funded by a grant from the Bill & Melinda Gates Foundation, includes data and estimates for the year 2015 from every country of the world, including outcomes for pregnant women, their babies and infants. Previous data on GBS burden focused on infant cases and high-income countries, but the impact of GBS disease worldwide, especially in Asia, was less clear.

The new research found GBS is present among pregnant women in all regions of the world, with an average of 18% of pregnant women worldwide carrying (colonised with) the bacteria, ranging from 11% in eastern Asia to 35% in the Caribbean, totalling 21.7 million2 in 195 countries.

Although several vaccines to prevent GBS are in development, none is currently available. This is despite the disease accounting for more than the combined neonatal deaths from tetanus, pertussis, and respiratory syncytial virus, for which maternal vaccines are already in use, or further advanced in development. This analysis shows for the first time that a maternal GBS vaccine, which was 80% effective and reached 90% of women, could potentially prevent 231,000 infant and maternal GBS cases.

GBS is carried by up to a third of adults, usually with no symptoms. In women, GBS can live harmlessly in the digestive system or lower vaginal tract, from where it can be passed to the unborn baby through the amniotic fluid or to newborns during labour. Babies are more vulnerable to infection as their immature immune systems cannot fight off the multiplying bacteria. If untreated, GBS can cause serious infections, such as meningitis and septicaemia, which may lead to stillbirths, and newborn and infant deaths. If they survive, babies can develop permanent problems including hearing or vision loss, or cerebral palsy.

Current GBS prevention focuses on giving antibiotics to women in labour, aiming to reduce disease in infants at delivery. At least 60 countries have a policy for antibiotic use in pregnancy to prevent newborn GBS disease. Of those, 35 have a policy to test all pregnant women to see if they carry GBS, and the remaining 25 countries identify women with clinical risk factors. However, implementation of these policies varies around the world.

Joy Lawn, Series co-lead and Professor of Maternal, Reproductive and Child Health at the London School of Hygiene & Tropical Medicine, said: "Too many parents around the world face the death of a baby or a young child - avoidable GBS deaths are happening in every country. Antibiotics currently prevent an estimated 29,000 cases of early-onset Group B Streptococcal disease per year, almost all in high-income settings. However, this approach may be difficult in low-income settings where many births take place at home, and laboratory capacity for screening for GBS is limited. In addition, giving antibiotics to 21.7 million women may contribute to antimicrobial resistance - a major global health crisis."

Anna Seale, Series co-lead and Associate Professor at the London School of Hygiene & Tropical Medicine said: "Even if antibiotics were given to all pregnant women identified through screening strategies, they target mainly early-onset GBS disease in newborns, not GBS disease in pregnant women, GBS disease before delivery causing stillbirth, or GBS disease in infants more than a couple of days old. A maternal GBS vaccine could prevent many more cases and deaths worldwide."

"Our work is the first to include an assessment of the burden of GBS disease in women during and after pregnancy, showing at least 33 000 cases worldwide in 2015, though this is highly likely to be an underestimate." said Dr Jennifer Hall (UCL Insitute of Women's Health) who led on one of the 11 papers . "We hope our work will stimulate further research on this topic of great importance to women and their babies worldwide. Despite the fact that infections are a leading cause of maternal deaths around the world - and the second most common cause in the UK - there was a disappointing lack of data about GBS disease in women during and after pregnancy, particularly in developing regions."

Dr Keith Klugman, Director of the Pneumonia Team at the Bill & Melinda Gates Foundation, said "The first few days and weeks of a baby's life are the most vulnerable - by far. By filling in one of the great voids in public health data, this work provides crucial insight and shows the pressing unmet need for the development of an effective Group B Strep vaccine. Immunizing expectant mothers is a potentially ground-breaking approach that could dramatically reduce the number of maternal and child deaths."

Johan Vekemans, co-author and Medical Officer, Initiative for Vaccine Research, World Health Organization, said: "These disease burden estimates highlight the importance of perinatal infection prevention. Existing recommendations should be implemented, but these are insufficient, and the number of affected families remain unacceptable. It is now essential to accelerate the GBS vaccine development activities. The technical feasibility is estimated to be high. Guidance highlighting research priorities is available. Work is ongoing to strengthen existing maternal immunization programmes. Next steps include a comprehensive evaluation of cost-effectiveness. We will be working with Professor Lawn and others at London School of Hygiene & Tropical Medicine, and global partners to lead on these activities."