Probing the nature of the neutrino using SuperNEMO

One mile beneath a mountain in the French Alps, an international team involving UCL scientists is hoping to unlock more secrets of the mysterious neutrino using a new, cutting-edge experiment called SuperNEMO. 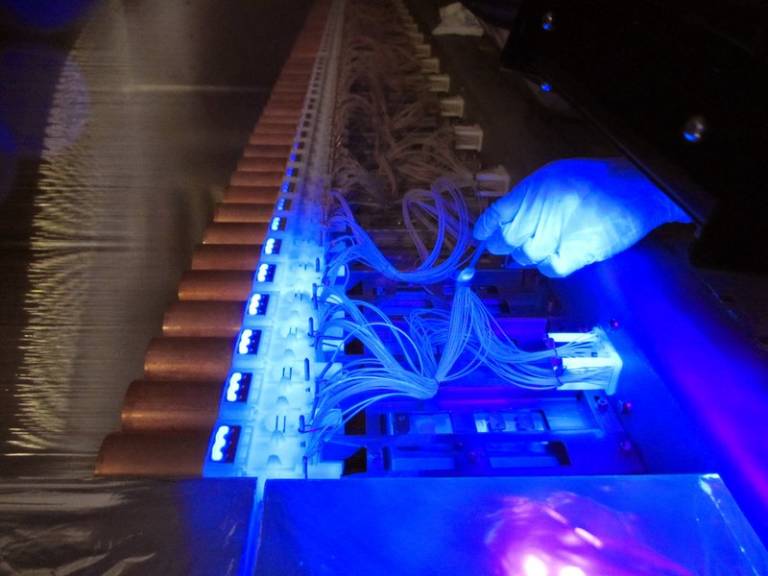 A UCL team helped to build the hardware and software being used by SuperNEMO - the Super Neutrino Ettore Majorana Observatory - which officially opens at Modane Underground Laboratory in the south of France today. It will be used to look into the origin of the imbalance of matter and anti-matter in the universe which has long left physicists puzzled.

The experiment is partly funded by over £7million investment from the UK's Science and Technology Facilities Council (STFC), with collaboration from UCL, Manchester University, Warwick University and Imperial College.

The aim is to use SuperNEMO in the search for neutrino-less double-beta decay, a rare nuclear decay which - if observed - could answer some of the biggest fundamental questions in physics and cosmology.

Neutrinos are fundamental particles which, despite being the most common matter particles in the Universe, are amongst the least understood. If a neutrino-less double-beta decay is observed by SuperNEMO, it would mean the neutrino is different to all the other matter particles in that it would be its own antiparticle. This discovery would revolutionise our understanding of the relationship between matter and antimatter, potentially giving new insights into how mass is generated.

Professor Ruben Saakyan, outgoing SuperNEMO co-spokesperson from UCL Physics & Astronomy, said: "If you ask any theorist today about the most pressing questions in modern particle physics a likely answer will be lepton number violation. This is because this question is intimately connected to the biggest puzzles of modern physics, such as the origin of matter and unification of fundamental forces.

"Searching for Lepton Number Violation through neutrinoless double-beta decay is precisely the main physics goal of SuperNEMO, and our search will be independent of the mechanism behind this phenomenon, whether it is due to neutrino mass or any other new physics. SuperNEMO is uniquely equipped for such an open-minded search due to its ability to reconstruct the tracks of individual electrons emitted in this process."

Professor David Waters, incoming SuperNEMO co-spokesperson from UCL Physics & Astronomy, added: "We now face a huge but exciting challenge in extracting the maximum physics impact from our newly built instrument, as well as planning further developments in the field of neutrinoless double-beta decay."

The UK has made a major construction contribution to SuperNEMO by delivering the gaseous tracking detector. A team at Manchester University built the individual tracking cells, while UCL researchers assembled those cells into a complete tracker at the UCL Mullard Space Science Laboratory and transported it in modules to France.

Cutting edge software tools are more important than ever when it comes to ensuring the success of modern experiments and physicists from Warwick University and Imperial College took important leadership roles in developing the experiment's simulation and analysis software frameworks.

Dr Justin Evans from Manchester University is the UK's Principal Investigator for SuperNEMO. "The UK-built tracker makes SuperNEMO stand out amongst double-beta decay experiments," he said. "It enables us to build a real picture of the radioactive decays in the detector. Not only does that give us a powerful tool for investigating the physics, but it is also critical in enabling us to reject background sources of radiation.

"The task of building this tracker was immense: every component, from the biggest structural component, right down to the smallest of nuts and bolts, had to be produced from carefully selected, pure materials, to be as clear of natural radioactivity as possible. To add to the technical challenge, the whole detector had to be assembled in a strict cleanroom environment, then packed up and relocated to a cavern deep under the Alps. Seeing this project come to fruition is hugely exciting, and is a testament to the skills and dedication of the entire UK team."

The Modane Underground Laboratory is the deepest in Europe, 1,700m below the peak of the Frejus mountain. By going deep underground, the SuperNEMO experiment is shielded from the cosmic rays that continually reach the Earth's surface, making it possible for scientists to spot the incredibly rare double-beta decay events they are interested in.

The UK-built tracking detector shows the paths of electrons given off by the double-beta decays, and this is a feature that other double-beta experiments around the world do not possess. This gives SuperNEMO an advantage, in that it provides certainty that what has been seen is really a double-beta decay, rather than other backgrounds such as alpha, gamma, or single-beta decay. Furthermore, it enables the scientists to investigate the mechanism behind the decays they see - double-beta decay could be mediated by supersymmetric particles, or other new heavy particles.

SuperNEMO builds on the very successful NEMO-3 experiment that ran in the same Modane Underground Laboratory until 2011. Through a very intensive R&D programme, this technology has been significantly improved, pushing the boundaries in areas such as detection of traces of radioactive impurities and high-resolution calorimetry. This development has also found its applications outside of SuperNEMO, for instance in dark matter and proton cancer-therapy research.

The construction of the first SuperNEMO module has involved 19 laboratories from 7 countries. It has culminated in the Demonstrator module whose launch is being celebrated today. The first physics data will be recorded by the Demonstrator in early 2018.

UK Science Minister, Jo Johnson, said: "SuperNEMO is an example of international collaboration at its best, and the UK's valuable contribution to increasing our understanding of the universe.

"With Science and innovation at the core of our Industrial Strategy and our additional funding of £4.7 billion for R&D, we are ensuring UK expertise continues to drive international projects such as this, further reinforcing our position as being a world leader in research and innovation and reaping the economic benefits of that."