Avatar therapy to reduce auditory hallucinations for people with schizophrenia

An experimental therapy which involves a face-to-face discussion between a person with schizophrenia and an avatar representing their auditory hallucination may help reduce symptoms, when provided alongside usual treatment, according to a study published in The Lancet Psychiatry journal. 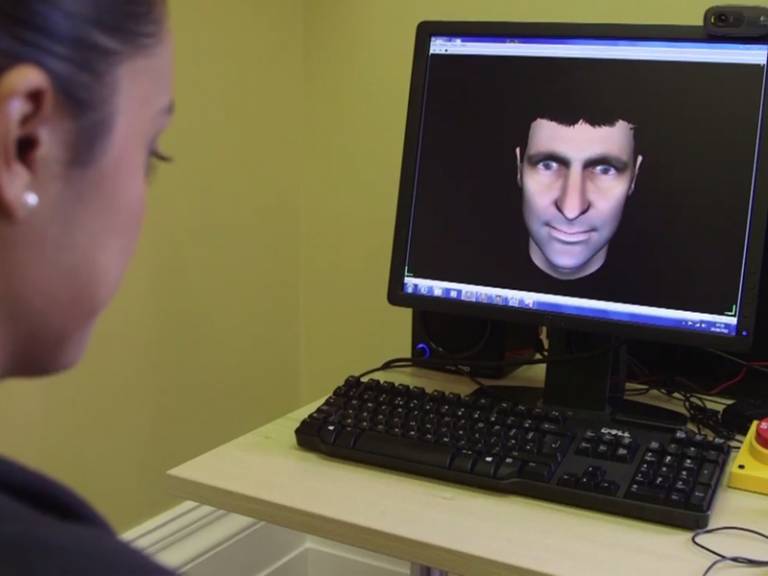 The randomised controlled trial compared the avatar therapy to a form of supportive counselling (adapted specifically for the study). It found that avatar therapy was more effective at reducing hallucinations at 12-week follow-up, and had a large effect size.

Further research to investigate the treatment's effectiveness in other healthcare settings will be needed, and so the treatment is not yet widely available.

The study is the first large-scale randomized controlled trial of this type of therapy, and was used in people with schizophrenia who had had persistent and distressing auditory hallucinations for more than a year, despite treatment. All participants continued to receive their usual treatment throughout the trial.

Around 60-70% of people who have schizophrenia experience auditory hallucinations that are typically insulting and threatening. For most people, drug treatments reduce these symptoms, but approximately one in four people continue to experience voices. Cognitive behavioural therapy for psychosis (CBTp) can also be helpful but is a lengthy therapy with at times limited effects on voices.

"A large proportion of people with schizophrenia continue to experience distressing voices despite lengthy treatment, so it is important that we look at newer, effective and shorter forms of therapy," said lead author Professor Tom Craig from King's College London, and the South London and Maudsley NHS Foundation Trust, UK.

He added: "Our study provides early evidence that avatar therapy rapidly improves auditory hallucinations for people with schizophrenia, reducing their frequency and how distressing they are, compared to a type of counselling. So far, these improvements appear to last for up to six months for these patients. However, these results come from one treatment centre and more research is needed to optimise the way the treatment is delivered and demonstrate that it is effective in other NHS settings."

This study, which took place at Maudsley Hospital SHARP clinic and the Institute of Psychiatry, Psychology & Neuroscience at King's College London, involved 150 patients who had had schizophrenia for approximately 20 years and heard 3-4 voices on average. Of these, 75 people had the avatar therapy and the other 75 people had a form of supportive counselling designed for this study. They also continued with their usual antipsychotic medication throughout the trial.

The avatar therapy took place over six sessions, with one 50-minute session each week. Before starting treatment, patients worked with the therapist to create a computerised simulation (avatar) of the voice they most wanted to influence - including what the voice said, how it sounded, and how it could look. Therapy involved a three-way conversation between the patient, therapist, and avatar, with the therapist speaking as themselves and also voicing the avatar.

As well as supporting therapy sessions, the system includes new techniques for matching the look and voice of the avatar to the patients' voice hallucinations.

"Getting a convincing simulation of the hallucination in the avatar is likely to be an important factor in the success of therapy," said co-author Professor Mark Huckvale (UCL Psychology & Language Sciences), who led the design of the avatar system used in the trial, and was also involved with Professor Leff's team that developed the treatment design and conducted an initial pilot study.

In each session, after discussing the targets for that day's work, patients spent 10-15 minutes speaking face-to-face with the avatar, practising standing up to it, correcting any misconceptions it had about them, and taking control of the conversation, so that power shifted from the avatar to the patient. The avatar came to recognise the patient's strengths and good qualities, and the patient's greater control and power in the relationship. The sessions were recorded, and an audio recording was given to the patient to take home to listen to when they heard the voices.

The supportive counselling ran for the same number and length of sessions. It encouraged patients to discuss any issues of concern to them and aimed to lessen distress and discuss practical ways of improving their quality of life. As with avatar therapy, at the end of the session, each patient recorded a positive message to listen to during the following week.

Assessments of the patients' auditory hallucinations were completed by researchers who were blind to which treatments patients had had.

After 12 weeks, the avatar group's symptoms were rated as less severe than those who received counselling.

The rapid improvements seen in the avatar treatment group were sustained at 24 weeks. However, during this time, hallucinations continued to become less frequent and less distressing for the counselling group also, likely because counselling could be a potentially useful therapy. As a result, there were no differences in outcomes between the two groups at 24 weeks.

The researchers note some limitations, including that the counselling was conducted by graduate trainee therapists, which may impact its effectiveness. In addition, it is not yet clear whether avatar therapy will be easy for the wider mental health workforce to deliver, as the study was conducted in a centre with expertise in treating psychosis and the avatar therapy was delivered by very experienced therapists.

The researchers aim to conduct a cost-effectiveness analysis, and investigate further the mechanisms of how the treatment reduces symptoms.