A recent graduate from UCL has won the £250,000 Wolfson Economics Prize, for a plan to improve Britain's roads. 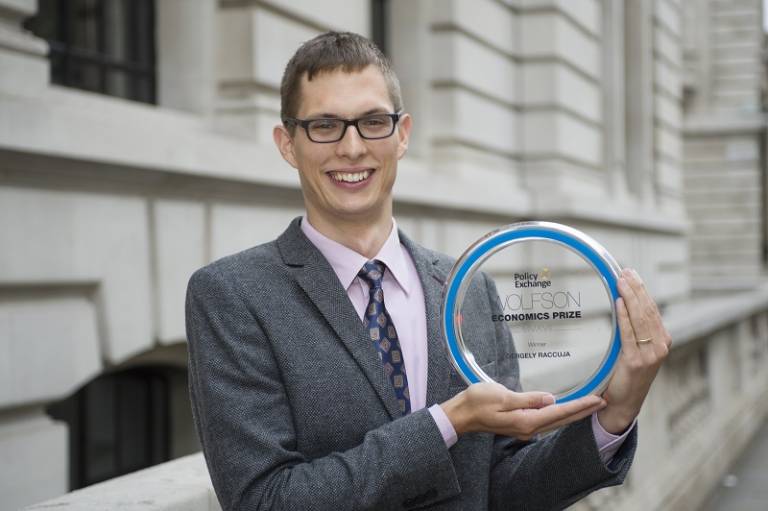 Gergely Raccuja, who studied European Social and Political Studies (ESPS) at UCL, proposed a distance-based charge to replace fuel duty and vehicle excise duty, with the money raised being used to boost investment in roads and improve air quality.

Mr Raccuja's entry 'Paying for road use could be Miles Better' was selected from among 120 entries from seven countries, judged by senior figures including the former chancellor Lord Darling.

Entrants to the 2017 prize were all asked to address the same question: "How can we pay for better, safer, more reliable roads in a way that is fair to road users and good for the economy and the environment?"

Mr Raccuja's plan argued that a new distance-based charge would be "simple and fair" and would help "rebuild trust" between the government and motorists.

Gergely Raccuja, who was born in Budapest, Hungary and moved to the UK in 2011, obtained a First Class Honours in ESPS, majoring in Politics, Urban Planning and Italian.

The ESPS programme is a flexible and diverse four-year programme which combines specialisation in one of nine humanities and social sciences, with a broad base in European history, law, politics and philosophy, fluency in a European language, and a year spent in a continental European university.

After completing his studies, Mr Raccuja started as a Graduate Transport Planner at Amey Consulting, Birmingham, in January 2016.

"We are delighted to hear of the success of our former student, Gergely Raccuja. Our transport policy and planning module, on the BSc in Urban Planning, Design and Management, is geared to giving undergraduates a taste of transport planning in preparation for moving into careers in consultancy, academia or government.

"Gergely's proposals should give welcome food for thought towards answering questions of how best to pay for and moderate demand for road travel, bearing in mind its environmental and social consequences - and how to best spend the money on infrastructure that helps build attractive cities," said Professor Stephen Marshall (UCL Bartlett School of Planning).

"Gergely Raccuja was an outstanding undergraduate student in European Social and Political Studies at UCL. Not only was he a very gifted and hard-working student, but he was also an open-minded individual with versatile academic interests.

"His winning the prestigious Wolfson Economics Prize makes the ESPS teaching and administrative staff very proud. This certainly demonstrates that our ESPS degree is a competitive degree which offers excellent career opportunities at postgraduate level in the academic world or outside of it," said Professor Philippe Marlière (UCL School of European Languages, Culture and Society).