A new study from UCL, London School of Hygiene &amp; Tropical Medicine, and Public Health England seeks to discover whether providing free HIV self-tests to men, transgender men and transgender women who have sex with men could reduce the number of people who have undiagnosed HIV. 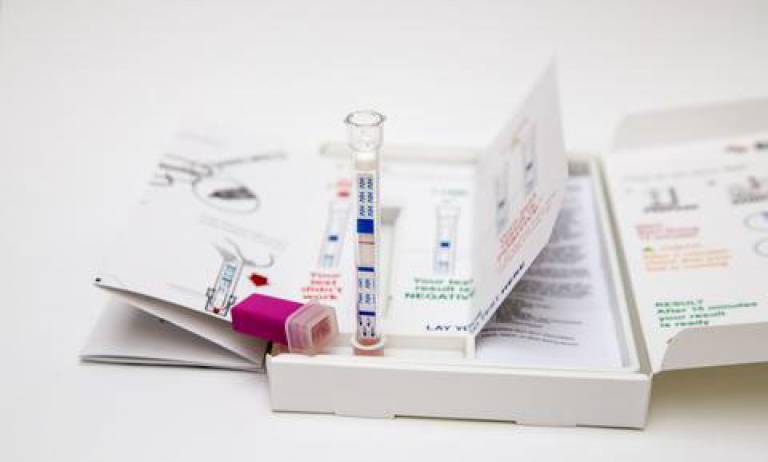 Funded by the National Institute for Health Research (NIHR), SELPHI is an internet-based study where respondents will be asked to register their details through an online survey that is being promoted through apps such a Grindr and Hornet, social media sites and the gay press. Researchers hope the results of the study will help the NHS decide whether it should provide free HIV self-testing kits.

SELPHI is a randomised trial which will offer some of those who register a free HIV self-testing kit. Selected participants can then test a sample of their blood and provide the result via a survey without having to attend a clinic or other healthcare setting.

Currently most HIV tests are conducted in genito-urinary medicine (GUM) clinics. It is thought that some men may be more likely to test, and to do so more often using the HIV self-testing kits - because this method is more private, quick and convenient than visiting a clinic. The tests are quite straightforward - the individual just has to take a sample of blood and process it themselves.

Professor Sheena McCormack (MRC Clinical Trials Unit at UCL) who is jointly leading the study with Dr Alison Rodger (UCL Institute for Global Health) said, "The number of new HIV diagnoses in gay and bisexual men is still depressingly high in the UK. Over half of men who have sex with men test less frequently than recommended and around a quarter have not done so at all. It is currently thought that around 13% of those of with HIV are unaware of their status."

"We are aware that many men may not get tested as they do not have the time to visit a clinic, feel embarrassed about visiting one or speaking to a doctor. Therefore self-testing kits could make them more likely to find out their status, giving them the opportunity to seek treatment for HIV earlier than they otherwise would have done."

The researchers think that the availability of free kits to those who are selected to take part in the trial will appeal to people in areas of England and Wales where rates of testing are currently quite low.

Co-researcher Michelle Gabriel (MRC Clinical Trials Unit at UCL) explained, "The self-testing kits may particularly encourage those in rural areas to get tested. If you are in a large urban area like London it is relatively easy to access a clinic and get tested, however in somewhere more remote it might involve two bus journeys, and there also may be concern about someone you know finding out that you are visiting the clinic. HIV Self-testing kits are already available for around £30 each but it is hoped that being able to offer them free will encourage greater numbers to use them."

Dr Rodger, who is leading the grant, added, "Although previous studies have shown that self‑testing is acceptable and increases uptake of testing amongst gay men, SELPHI is the first one designed to see if there is an impact on HIV diagnoses."

The SELPHI trial is open to recruitment now; individuals who are interested in taking part can join the study by visiting the SELPHI Website www.selphi.org or by following links in adverts apps or on Facebook.