Aquatic plants in 'ghost ponds' are able to survive more than 100 years buried beneath cropped agricultural fields, according to new UCL research. 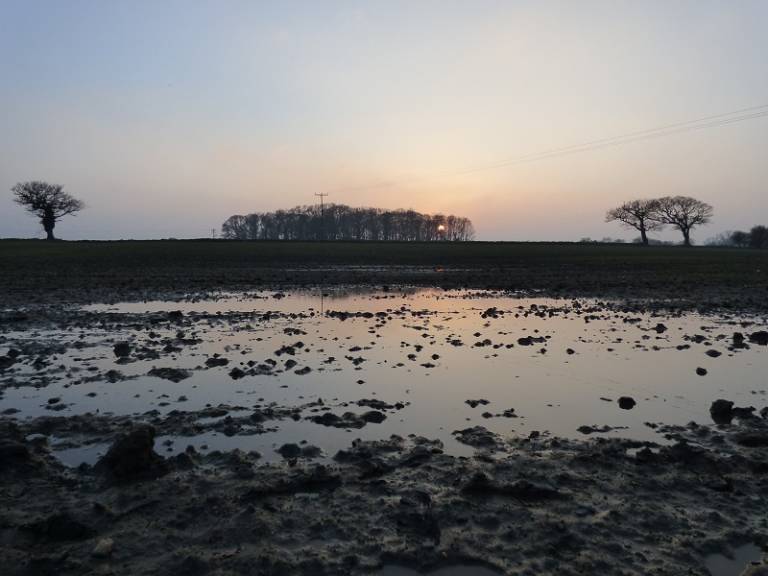 Ghost ponds are abundant across many agricultural regions, often visible as damp depressions, areas of poor crop cover, or changes in soil colour. Many UK ponds were filled-in during agricultural land intensification that took place after the 1950s.

At the start of 20th century, there were an estimated 800,000 ponds in England and Wales, but it is thought that less than a quarter of these now remain. However, the UCL study, published in Biological Conservation, highlights that it is possible to 'resurrect' these buried habitats from the seeds and eggs stored within their historic sediments.

"We have shown that Ghost ponds can be resurrected and remarkably wetland plants lost for centuries can be brought back to life from preserved seeds" said lead author Emily Alderton (UCL Geography).

"Ghost ponds often make poor agricultural land as it is very difficult to completely drain a pond and stop it collecting water. Re-digging these sites is a brilliant away of returning vibrant pond habitats to the landscape without any loss of productive land" added Emily.

The study focused on three farmland ghost ponds in Norfolk, of similar type, location and surrounding land use, which are widely representative of the conditions experienced by many Ghost ponds across the UK. The ponds were buried for around 45, 50, and 150 years, and each pond was re-excavated following the contours of the original lost pond.

In the experiment all three ghost ponds were colonised in less than six months by a range of native aquatic plant species, and at least eight species were shown to germinate from seeds in laboratory trials. The study is the first to demonstrate at least centennial-scale survival of aquatic plants in extinct aquatic habitats beneath intensively cultivated agricultural fields.

"With UK farmland ponds typically supporting between six and 14 aquatic plant species, the eight species that survived under prolonged burial represent a significant proportion of the expected species diversity in farmland ponds," said Dr Carl Sayer, leader of the UCL Pond Restoration Research Group who have been pioneering pond restoration techniques in the UK.

"Ghost ponds represent abundant yet overlooked biological time capsules and it is thought that the restoration process could play a significant role in reversing some of the habitat and biodiversity losses caused by the global disappearance of agricultural wetlands. Indeed, using the approaches demonstrated by the study, it may even be possible to resurrect locally and indeed nationally extinct plant species in the future" added Dr Sayer.

The findings of the study offer a glimmer of hope for the restoration of aquatic habitats and plants lost to agriculture. "We urge conservationists to make use of Ghost ponds, incorporating their restoration into landscape-scale conservation strategies and evolving agri-envrionment approaches and policy," added Emily.

The research was funded by a Natural Environment Research Council (NERC) PhD award to Emily Alderton at UCL. Additional funding was kindly contributed by the Norfolk Biodiversity Partnership, ENSIS Ltd., and the UCL Graduate School.