Study shows how HIV breaches macrophage defences, could be step towards cure

A team led by UCL researchers has identified how HIV is able to infect macrophages, a type of white blood cell integral to the immune system, despite the presence of a protective protein. 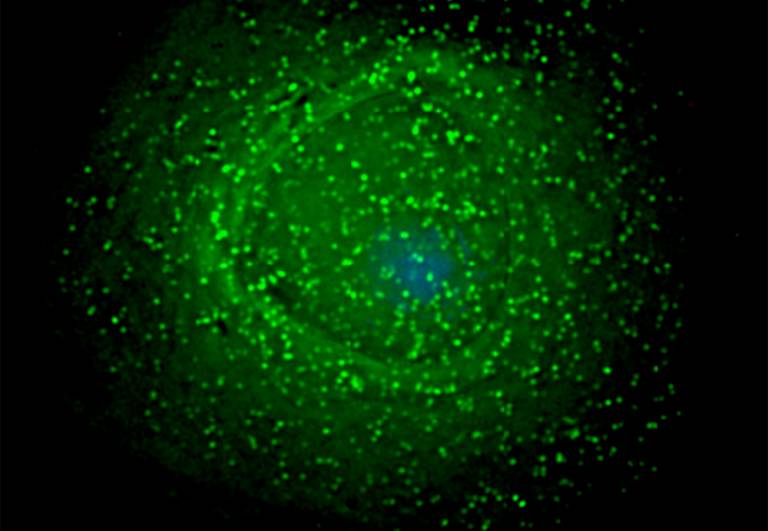 They discovered a treatment that can maintain macrophage defences which could be a key part of the puzzle of reaching a complete cure for HIV/AIDS.

Macrophages make an antiviral protein called SAMHD1, which prevents HIV from replicating in these cells - except for when the protein is switched off, as part of a natural process discovered by the UCL-led team.

"We knew that SAMHD1 is switched off when cells multiply, but macrophages do not multiply so it seemed unlikely that SAMHD1 would be switched off in these cells," said Professor Ravindra Gupta (UCL Infection & Immunity), the senior author of the paper. "And yet we found there's a window of opportunity when SAMHD1 is disabled as part of a regularly-occurring process in macrophages."

Lead author of the EMBO Journal study, Dr Petra Mlcochova (UCL Infection & Immunity) said: "Other viruses can disable SAMHD1, but HIV cannot. Our work explains how HIV can still infect macrophages, which are disabling SAMHD1 by themselves."

The reason why SAMHD1 gets switched off remains to be determined, but the authors suggest it might be done in order to repair damaged DNA, part of the normal functioning of the macrophage.

In a further part of the study, the researchers discovered how to close this window of opportunity by treating the cells with HDAC inhibitors, which are sometimes used in cancer treatments.

"Our findings could help explain why some people undergoing anti-retroviral therapy for HIV continue to have HIV replication in the brain, as the infected cells in the brain are typically macrophages. While this is a barrier to achieving control of HIV in just a minority of patients, it may more importantly be a barrier to a cure," Gupta added.

The researchers say that macrophages can be an important reservoir of HIV infection that lingers away from the reach of existing treatments. Once a macrophage is infected, it will continually produce the HIV virus, so cutting off that point of infection within the body could be an important step towards safeguarding the entire immune system. HDAC inhibitors may be particularly helpful as they're already known to reactivate latent HIV cells, thus making the virus vulnerable to the body's defences, especially if supported by anti-retroviral therapy.

The series of tests involved cultures of macrophages derived from human cells in vitro, which responded well to HDAC inhibitor treatment, as well as macrophages residing in mouse brain tissues.