This week, meet Anton Volkov who is juggling being a final year student studying Economics and Business with East European Studies whilst being President of the UCL Film & TV Society. 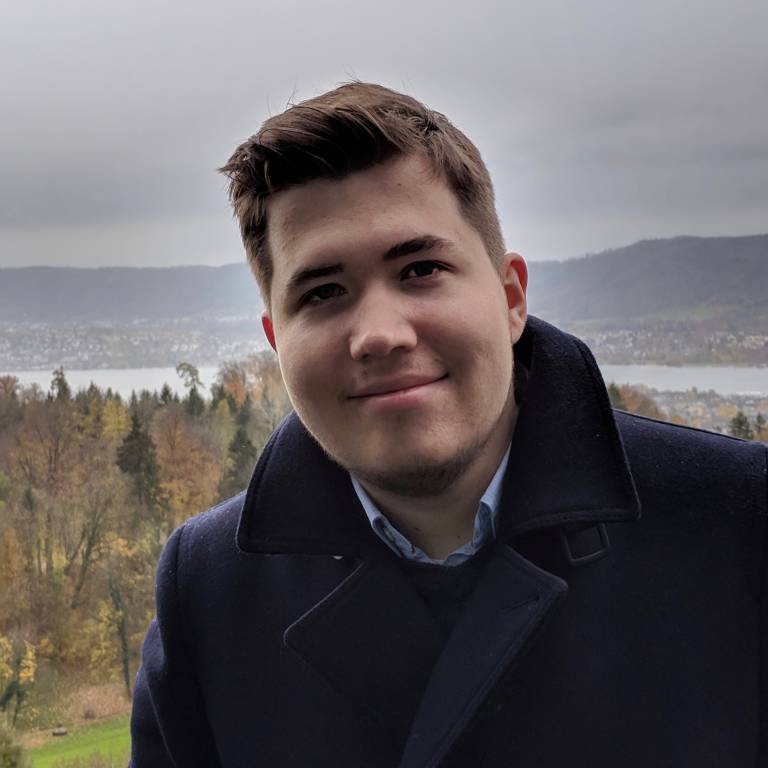 1. Why are you interested in Economics and Business and what do you plan to do in the future?

So many of the decisions made at different levels are underpinned by economic and business theories, so having a sense of how it all works, I feel, is crucial to understanding the world today and what's happening in it. And this knowledge can be applied to so many fields and industries, no matter where you want to go this will come in useful - including film and entertainment, which is where I hope to go in the future.

Being involved with and running the Film & TV Society would be the painfully obvious answer but it is the true answer: it has such a rich history and legacy that I am incredibly proud to have the chance to contribute towards. There is so much you can get involved with at the society: it doesn't matter if you're into making, discussing, or just watching films, there's something for everyone, including some real once-in-a-lifetime opportunities. We are excited to have so many new students involved this term in particular, during which we've already beaten our membership counts of the last few years!

3. Have you discovered any 'hidden gems' during your time at UCL?

If I had to go for one, it would be the SSEES library: it's probably the quietest and, I dare say, cosiest place to work on campus. There can be a fight for seats because it's not particularly big but once you've got a good spot you can just tune everything out and get down to work. The newly-opened Wilkins Terrace is a great space which we hope to use more in the future - as well as a convenient shortcut to our Film Studio in the Bloomsbury Building, which, I guess, could also be considered a 'hidden gem'...

4. Give us your top three things to do/see/go to in London.

The fantastic thing about London is that there is so, so much going on, it's difficult to pick and choose just three! If I had to though, I'd probably choose relaxing (or letting off steam!) in the city's numerous parks, seeing London from above at places like The Shard, the London Eye and St Paul's, and the many entertainment events: be it concerts, theatre performances or film screenings. I was lucky enough to see Hamilton here very recently and the energy and excitement from the London crowds adds so much to the atmosphere; release day midnight screenings of highly-anticipated films such as the new Star Wars are great experiences for the same reason as well.

5. If you were Provost for the day what one thing would you do?

Link societies/the Students' Union in general and UCL itself closer together. The recent rebrand of the Union was a step in the right direction; I feel it's important for the university itself to have more communication with and promote student-led activities and societies through their channels. With the re-opening of the Bloomsbury Theatre next year, there is a great opportunity to collaborate more on that level. UCL is a global brand and such a fantastic asset for student activities to reach out into the respective industries they're connected with (if they so wish), and likewise, I'm sure the 250+ societies are an incredible asset for the university itself - I think it's important to take full advantage of that.

The expected answer would be Christopher Nolan, right? Honestly, though, I'd be lying if I said that he isn't one of my inspirations; people like him, James Cameron, Steven Spielberg, they're some of the very few in the industry able to fully pursue their visions and passion without constraints and get audiences to come along for the ride (and provide that financial return!). In an age where so much of entertainment seems to be turning from art to product, hitting a balance between the economic and artistic imperatives at every level is crucial, and they as well as the producers and studios supporting them have done fantastic work with that. And the fight for that 'balance' is what fascinates me the most about the entertainment industry in general and why it's something I want to pursue.

Probably that I'm doing an Economics degree and not pursuing the usual sort of professions economics graduates do...