UCL is aiming to raise £600m for cutting-edge research, transformative capital projects and expanded student support in a new fundraising and engagement campaign, It's All Academic - The Campaign for UCL, launched today in London. 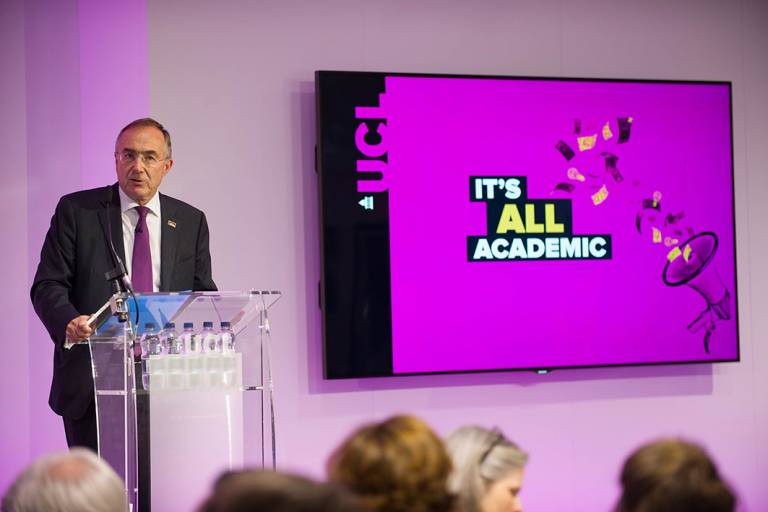 The target is one of the biggest ever seen in the UK's higher education sector, with only Oxford and Cambridge raising larger levels of philanthropic funding through their campaigns. The Campaign is launching with £253m already raised, which represents 20,707 donations by 10,287 donors from 76 countries since 2011.

The funding will support the university to achieve some of its biggest strategic ambitions, with projects ranging from UCL East, funding for critical mass thinking in the Institute of Advanced Studies, and a new home for its dementia research community.

The Campaign will focus on four main themes that represent the university's long-term priorities - students, health, London, and disruptive thinking - with projects that include:

In addition to raising philanthropic funding, the Campaign will also focus on growing and increasing the involvement of its global community of over 200,000 alumni, reflecting the importance of long-term international relationship building.

UCL is one of the UK's most successful fundraising universities, raising the third highest level of philanthropic giving after Oxford and Cambridge. Creative approaches to fundraising have included an innovative retail partnership using the 5p carrier bag levy to raise money for UCL dementia research, bringing together a coalition of leading retailers led by Iceland, including Asda, Morrisons, Waitrose, WHSmiths, Booths, Poundland and HSS Hire. The partnership will raise £20m over the next three years, and UCL has also been named Iceland's Charity of the Year - the first time a university has held that title.

Professor Michael Arthur, UCL President & Provost, said: "UCL was set up by people who wanted to change the world by doing things differently, and philanthropy was a major part of making that happen right from the start. Nearly 200 years later, we are still driven by that founding ethos - to make a tangible difference to individuals and societies around the world by giving brilliant people the space to try new things and think differently.

"Philanthropy is a crucial part of enabling that to happen, which hugely extends the reach of what we do and the speed at which we can do it. I'm very excited to be launching one of Europe's most ambitious university fundraising campaigns, and even more excited about all the benefits it will bring.

"UCL has a global vision and a global impact. Our community is international, with staff and students representing every corner of the world, who come here because it's a place where they know they can make a real difference. And their work is supported by generous philanthropic gifts from a community of donors that is also increasingly international.

"The great challenges of health, well-being, sustainability and equality don't have borders and neither does the work to develop the solutions. Following the result of the EU referendum, it's more important than ever to champion that spirit of international partnership. I'm very proud that this ambitious fundraising campaign will have a truly global impact."

Lori Houlihan, UCL Vice-Provost (Development) said: "The role of philanthropy in universities is changing and the most successful institutions are the ones taking new and creative approaches. There's a growing understanding that universities are charitable entities and ideal partners for making a difference in areas you feel passionately about.

"The retail partnership is an excellent example of that; there is no neuroscience hub in the world that is comparable to UCL's, and nowhere else is as likely to make a decisive intervention against dementia. Our retail partners know that working with us is the most efficient and effective way to make real progress against this terrible condition."

The Campaign will launch today (15 September) with a free public debate featuring leading academics answering the question:'How Will Society Survive to the 22nd Century?'

The event will be hosted by ITN Economics Editor Noreena Hertz, who is also a UCL alumna and honorary professor, and will feature:

The event can be watched live online from 6pm on 15 September: