Paving the way for new treatments to combat bacterial infections

A team from Birkbeck, University of London and UCL has revealed new details of the structure of bacterial pili and how they interact with phages - viruses which can enter and kill bacteria. 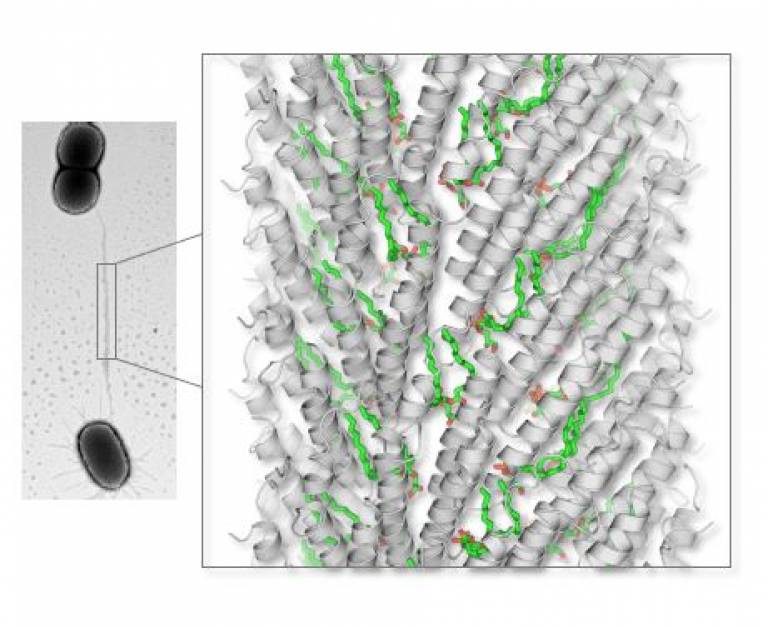 Understanding this structure in atomic detail will help the development of new treatments for bacterial infections that have become resistant to antibiotics, by opening the way to successful phage therapies. The research, funded by Wellcome, is published today in the journal Cell.

Led by Professor Gabriel Waksman from the Birkbeck/UCL Institute of Structural and Molecular Biology, the team looked at the pilus of the bacteria E. coli. The pilus is the structural feature through which genetic material can be passed from one bacterium to another, and are key to the spread of antibiotic resistance. Crucially however, the pilus is also the site where phages interact first before they enter the bacterium to destroy it.

Professor Waksman said: "In Western Europe the use of bacteriophages to combat bacterial infections declined rapidly when effective, cheap and broad-range antibiotics became available. However, with antibiotics becoming increasingly ineffective, it has become urgent to explore all possible avenues in the search for novel therapeutic agents. Phage therapy is poised to undergo a major revival as one potential weapon in the arsenal of antimicrobials."

Using electron microscopy, the team found a particular phospholipid bound to the protein that makes up the pili in greater quantities than it did to proteins in the membrane of the host cell. This suggests the phospholipid might play an important role in helping the pilus break through the host cell membrane to deliver material to other cells. It might also enable the retraction of the pilus back into the inner cell membrane which is an important mechanism for bringing phages closer to the surface of the host, facilitating their penetration inside the cell.

The team also looked at the effect of different genetic mutations on the part of the pilus which binds to this phospholipid. Some mutations completely stopped pilus formation, showing that the lipid is essential to maintain the structure of the pilus. Other mutations in the genetic make-up of the binding site created a strong negative charge in the lumen (the channel through the middle) of the pilus. This would give rise to a strong repulsive force that would prevent the negatively charged DNA of a phage from entering the pilus, while still enabling the more neutral protein-DNA complex required for bacteria to share their genetic material to pass through.

Professor Waksman said: "The structure that our study has revealed gives unprecedented detail of the pilus and also shows that the sensitivity to phage infection can be altered through genetic mutation, providing proof of concept that this knowledge can be used to derive effective bacteriophage therapies to combat infectious diseases."