Gaia, a European Space Agency satellite designed to unlock the secrets of the birth and evolution of the Milky Way, has released its first wave of data on the positions and brightness for about one billion stars. 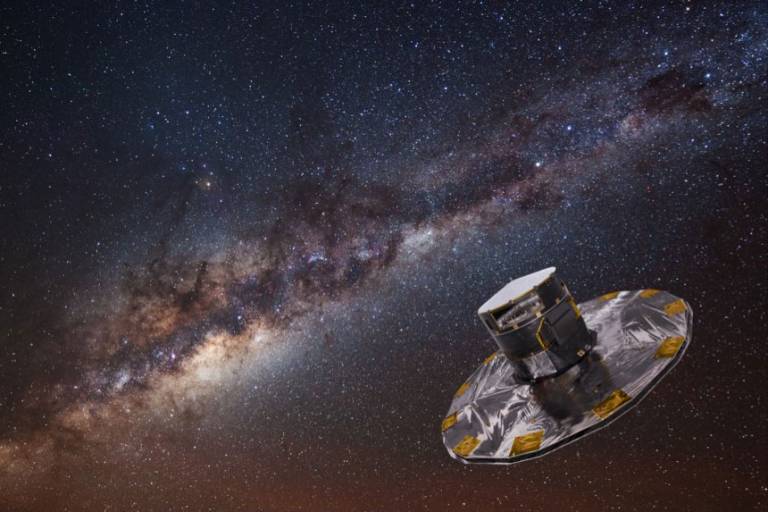 Its mission is to produce the most detailed map ever made of the Galaxy and final results are expected in the early 2020s.

"The Milky Way and its immediate neighbours are the only galaxies that can be studied in detail, star-by-star, making this a really exciting mission. Although not the complete picture, this first data release is a significant milestone and will be one of several over the next six years," explained Professor Mark Cropper, Gaia team lead at UCL Mullard Space Science Laboratory (UCL MSSL).

UCL MSSL has contributed significantly to Gaia for 15 years by testing and calibrating each of the 106 electronic detectors used to capture the data shared today. It's also taken a critical role in the development of Gaia's state-of-the-art Radial Velocity Spectrometer (RVS) and processing the data from it. The RVS provides the speed and temperature of each star as well as its size and age; results from it are expected to be announced in approximately a year's time.

Gaia has a suite of tools including two telescopes which each focus on the same large array of  electronic detectors to calculate the position of each star with unprecedented accuracy. The data released today used observations captured by Gaia between 25 July 2014 and 16 September 2015 as it slowly rotated every six hours to survey the whole sky.

UCL MSSL Data Flow Scientist, Dr George Michael Seabroke, said: "During its mission, Gaia will observe more than five trillion positions of at least one billion stars. In the late nineteenth century, my great-great-grandfather, George Mitchell Seabroke, painstakingly made thousands of measurements by eye of the positions of hundreds of stars over a number of years. That Gaia can automatically make such a huge number of measurements is incredible and a testament to technological advancements!"

Taking advantage of close involvement in the Gaia mission in the past decade, UCL MSSL has developed a research team to exploit the Gaia data. Gaia's first data release includes the Tycho-Gaia Astrometric Solution (TGAS), which goes beyond the position measurements and provides the distance and transverse motion of more than 2 million stars. Gaia will eventually provide these quantities for the full one billion stars - and with much better accuracy.

"TGAS data will be a significant first step for astronomers to understand the formation history of the Milky Way Galaxy from Gaia's unprecedentedly large and precise dataset," said Dr Daisuke Kawata, Reader at UCL MSSL. "We'll use the first Gaia data to study the spiral structure of the Milky Way and the properties of the young and old Galactic disks, which will be ground-breaking information to reveal the evolutionary history of the Milky Way."

Professor Gerry Gilmore, the UK Principal Investigator for Gaia at Cambridge University said: "Gaia's first major data release is both a wonderful achievement in its own right, and a taster of the truly dramatic advances to come in future years. Several UK teams have leading roles in Gaia's Data Processing and Analysis efforts, which convert the huge raw data streams from the satellite into the beautiful science-ready information now made available for the global scientific and public communities. UK industry made critical contributions to the Gaia spacecraft. The UK public, including school students, as well as scientists, are sharing the excitement of this first ever Galactic census."

Although this is the first chance astronomers and the public have had to access the most detailed map ever made of the sky, Gaia has already been producing scientific results over the past two years in the form of Gaia Alerts. These alerts have led to varied discoveries including supernovae, cataclysmic variable stars, novae, flaring stars, gravitational microlensing events, active galactic nuclei and quasars.

Gaia was launched on 19 December 2013 and has been in routine science operations since 25 July 2014. It is led by ESA. The UK team involving researchers mainly from UCL MSSL, Cambridge and Edinburgh Universities is kindly supported by the UK Space Agency and the Science and Technology Facilities Council.