Celebrating 10 years of Hinode in space

Hinode, a satellite which observes the Sun's activity in high resolution, today marks ten years of success since its launch. 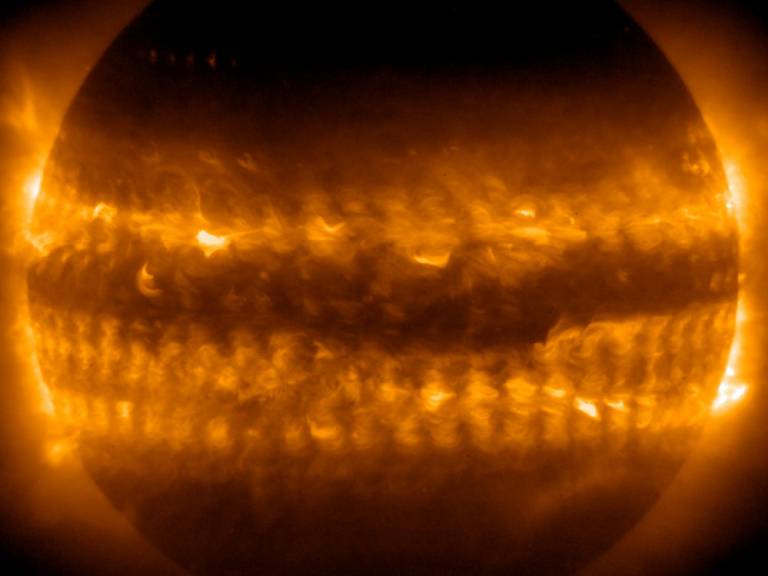 It carries three instruments, one of which - the Extreme Ultraviolet Imaging Spectrometer (EIS) - was built and is managed by a UCL team.

On the anniversary, Professor Louise Harra (UCL Mullard Space Science Laboratory), said: "It's testament to the UCL team and collaborators in Japan, America and Norway that Hinode is still going strong after all this time in space. We designed EIS to uncover valuable information about all parts of the Sun including the hottest parts of solar flares. It does this by taking imaging spectroscopy measurements and performing quantitative plasma diagnostics of the solar corona over a broad range of plasma temperatures."

The EIS instrument has operated flawlessly since launch, producing data which have been shared internationally and used in more than 900 refereed publications to date. EIS has provided new information on the Sun's atmosphere including the heating and dynamics of the corona, the source of the solar wind and the properties of hot flaring plasma.

Hinode's EIS team, led by Professor Harra, has won multiple prestigious awards for its contribution to Hinode and Japan-UK scientific relations and continues to use data from Hinode to study solar physics.

On 22 September 2006 at 21:36 GMT, Hinode was carried into its orbit around the Earth by the last vehicle in the series of M-V rockets. A couple of years after it started observations, the Sun entered its solar minimum phase, which allowed the instruments to capture jets, granules, and gaseous features in the solar atmosphere. When the Sun reached maximum activity around 2014, Hinode captured active corona, large sunspots, solar flares and plasma ejections.

Hinode has also recorded rare astronomical events during its time in space, including the transit of Venus and solar eclipses. It continues to deliver spectacular images and movies which aren't possible to capture from Earth, including monitoring of the Sun's polar regions.

To celebrate all that Hinode has achieved, the Japan Aerospace Exploration Agency (JAXA) released a short movie showcasing a selection of data from the past ten years.

Hinode is a Japanese mission developed and launched by the Institute of Space and Astronautical Science (ISAS) / JAXA, with NOAJ as a domestic partner and NASA and STFC (UK) as international partners. It is operated by these agencies in cooperation with ESA and NSC (Norway).