'Natural Creativity: Sex and Trickery' is a new exhibition at the Grant Museum of Zoology at UCL. 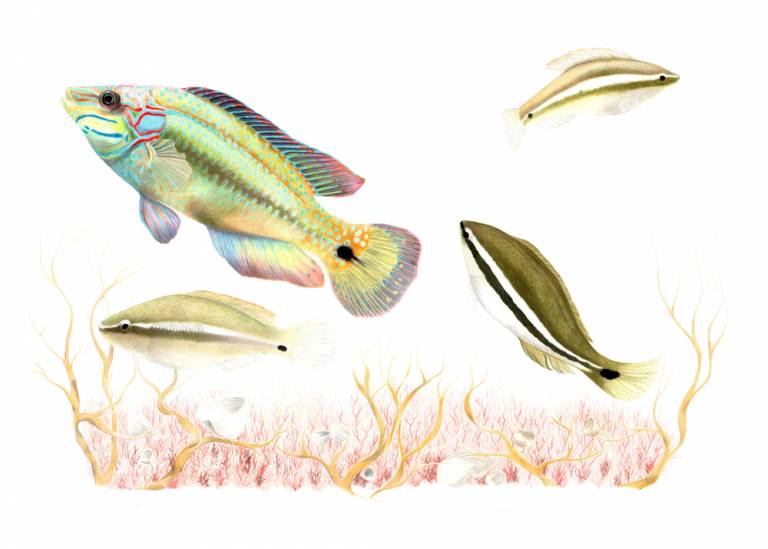 It explores the myriad elaborate shapes, sizes and crafty behavioural tactics some animals have evolved in order to survive, reproduce and pass on their genes.

Through intricate drawings by the artist Clara Lacy, 'Natural Creativity' asks the question, why is the natural world so colourful and varied? Lacy has drawn species with highly unusual sexual behaviours or mechanisms for determining sex. It is commonly assumed that animals are born either male or female then reproduce as adults, but things can get much more interesting. Some species change sex over their lifetime, become a grandmother before giving birth, or trick others into thinking they belong to the opposite sex.

Some of the artworks feature species of birds and fish whose males have evolved elaborate colours and absurd ornamental appendages to attract mates. These resplendent males will attack any rivals they see approaching. However, some smaller males develop colourings that make them look like females, so they can sneak past the dominant male and get a share of the females themselves.

In many species, such as orangutans and grouse, the males grow to be several times bigger than the females, coming to blows to fight off their rivals. Male Darwin's beetles have evolved massive jaws which are longer than the rest of their bodies and used to throw their competitors out of the tree. In other species the preferences of the females for ostentatious colours and courtship rituals have driven the males to develop ridiculous appearances and behaviours, in order to catch the fancy of their potential mates.

The species in the exhibition are the focus of research into the evolution of sexual behaviour, preferences and the ways that sex is determined in animals. Clara Lacy is the Artist in Residence in the Mank Lab at UCL's Department of Genetics, Evolution and Environment. Working closely with the scientists based there, Lacy's illustrations bring to life their research into the amazing variety of sexual and genetic survival strategies in the animal kingdom.

"To have the opportunity to work first-hand with the scientists at UCL has been priceless," says the artist Clara Lacy. "Nothing is more inspiring then when people are truly passionate about their subject."

"The Grant Museum is a based on a Victorian zoology collection which has always been part of the University," says Grant Museum Manager Jack Ashby. "This project is really exciting as it allows us to explore extremely modern advances in modern zoology taking place here at UCL, and engage with them through stunning, intricate drawings displayed among our historic specimens. As well as that, some of the things these animals are doing to reproduce is genuinely jaw-dropping. Evolution has a lot to answer for."

Professor Judith Mank (UCL Genetics, Evolution & Environment) says, "Clara Lacy's illustrations have transformed how we communicate our research, making concepts much more visual, and visually appealing. It has been such a pleasure to see her artistic process up close."

'Natural Creativity: Sex and Trickery' runs from 19th October to 23rd December 2016. The Grant Museum of Zoology is open from 1-5pm Monday to Saturday. Admission is free and there is no need to book.