Light therapy could save bees from deadly pesticides 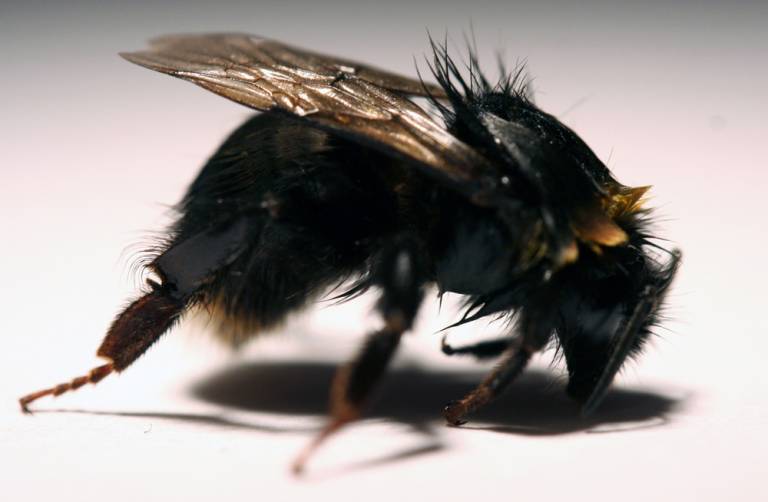 "Neonicotinoid pesticides are a persistent threat to global bee populations, which play a critical role in agriculture," says Professor Glen Jeffery (UCL Institute of Ophthalmology), the senior author of the PLOS ONE paper. "My team is working to develop a small device that can be fitted into a commercial hive, which could be an economic solution to a problem with very widespread implications."

The pesticides undermine mitochondrial function and compromise the production of ATP, the currency for energy that drives cellular function. This results in reduced mobility among bees exposed to neonicotinoids, leading them to die of starvation, unable to feed themselves.

The researchers used four groups of bees from commercial hives, with more than 400 bees in each colony. Two groups were exposed to a neonicotinoid, Imidacloprid, for ten days, with one group also being treated with light therapy over the same period - 15 minutes of near infrared light (670nm) was shone into the hive twice daily.

The mobility of the bees that were poisoned but not treated with light therapy dropped off rapidly, as did their ATP levels, and their survival rate declined accordingly. The bees that were poisoned but also treated with light therapy had significantly better mobility and survival rates, living just as long and functioning just as well as bees that had not been poisoned. One group was given light therapy without being poisoned, and their survival rate was even better than the control group. The researchers found the deep red light did not interfere with bee behaviour as they cannot see it.

"Long-wavelength light treatments have been shown in other studies to reduce mitochondrial degeneration which results from aging processes. It's beneficial even for bees that aren't affected by pesticides, so light therapy can be an effective means of preventing loss of life in case a colony becomes exposed to neonicotinoids. It's win-win," Professor Jeffery says.

While light therapy works best as a preventative measure, the researchers found it can also be helpful as treatment in response to an incident of pesticide exposure, as long as the treatment is started within a couple days of exposure.

"We found that by shining deep red light on the bee which had been affected by the toxic pesticides that they could recover, as it improved mitochondrial and visual function, and enabled them to move around and feed again," says lead author Dr Michael Powner (City, University of London).

Researchers at UCL Ophthalmology have been studying near-infrared light therapy because of its benefits not only for bees, but also for other animals including humans, particularly to counteract effects of aging and a range of neurological diseases.

"When a nerve cell is using more energy than other cells, or is challenged because of a lack of energy, red light therapy can give it a boost by improving mitochondrial function. Essentially, it recharges the cell's batteries," Professor Jeffery explains.

The study was funded by the Biotechnology and Biological Sciences Research Council (BBSRC).