Three square metres of Arctic summer sea ice disappears for every tonne of carbon dioxide a person emits, wherever they are on the planet, according to new UCL research. 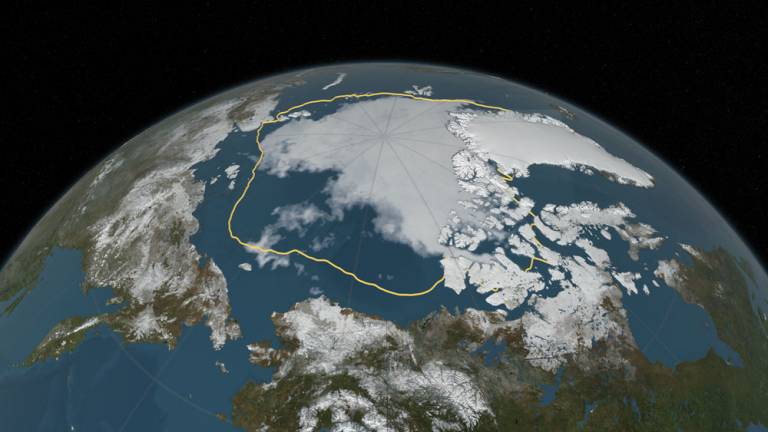 The rapid retreat of Arctic sea ice is one of the most direct indicators of the ongoing climate change on Earth. The newly discovered linear relationship helps us understand our personal contribution to global climate change for the first time and highlights the importance of lowering emissions to limit global warming to 1.5°C.

Over the past forty years, the ice cover in summer has shrunk by more than half, with climate models conservatively predicting that the remaining half could disappear by the middle of the century unless greenhouse gas emissions are reduced rapidly.

"So far, climate change has often felt like a rather abstract notion. Our results allow us to overcome this perception. For example, it is now straight-forward to calculate that the carbon dioxide emissions for each seat on a return flight from London to San Francisco causes about 5m2 of Arctic sea ice to disappear," said study co-author Professor Julienne Stroeve, UCL Earth Sciences and the National Snow and Ice Data Centre in Boulder, Colorado.

The study, published today in Science, derives the future evolution of Arctic summer sea ice directly from the observational record between 1953 and 2015. The authors examined the link between carbon dioxide emissions and the area of Arctic summer sea ice, and found that both are linearly related. This relationship allowed them to estimate that average personal carbon dioxide emissions of several metric tonnes per year can be directly linked to the loss of tens of square metres of Arctic sea ice every year.

"Put simply, for each tonne of carbon dioxide emitted, the climate warms a little bit. To compensate for this warming, the sea ice edge moves northward to a region with less incoming solar radiation. This then causes the sea ice area to shrink. Simple geometric reasons cause these processes to combine to the observed linearity," explained Dr Notz.

Previous studies suggest that models might not be the most suitable tools to quantify the future evolution of the ice cover because they underestimate the loss of Arctic sea ice. The study found that this is most likely because the models underestimate the atmospheric warming in the Arctic that is induced by a given carbon dioxide emission.

"It seems that it's not primarily the sea ice models that are responsible for the mismatch. The ice just melts too slowly in the models because their Arctic warming is too weak," explained Professor Stroeve.

The study concludes that if Arctic summer sea ice has a realistic chance of long-term survival, global warming must be kept below 1.5°C by lowering emissions.

"The internationally agreed 2°C global warming target is not sufficient to allow Arctic summer sea ice to survive. Given the observed sensitivity of the ice cover, the sea ice is gone throughout September once another 1000 gigatons of carbon dioxide has been emitted. These levels of emissions are usually taken as a rough estimate of the allowable emissions to reach the 2°C global-warming target but much lower levels of emissions are needed to keep global warming below 1.5°C, as called for by the Paris agreement," added Dr Notz.

The work was kindly funded by Max Planck, NASA and The National Science Foundation.