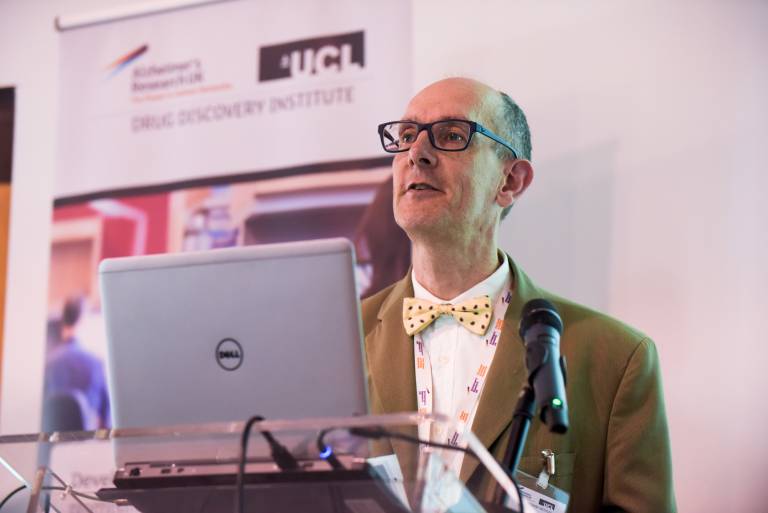 Part of a network of three Institutes, the UCL Drug Discovery Institute will work with its counterparts at the Universities of Oxford and Cambridge to support the translation of cutting-edge academic science towards new treatments for dementia. The event, hosted by UCL and Alzheimer's Research UK, saw several speakers take to the stage to discuss current efforts in dementia research at the university and reflect on the importance of the charity's investment.

Professor Michael Arthur, UCL's President & Provost, opened the event by speaking of the major strategic importance of the UCL Drug Discovery Institute and how it integrates with ongoing efforts taking place at the university to tackle dementia. He spoke of a historic moment where future generations will look back at the launch of these initiatives as real turning points in the fight against Alzheimer's and other dementias.

Hilary Evans, Chief Executive of Alzheimer's Research UK, stressed that people are at the heart of everything the charity does and how this approach underpins our strategic efforts to couple basic and translational research to bring patient benefit more quickly. She spoke of the collaborative nature of the Alzheimer's Research UK Drug Discovery Alliance and how it will bring together the best that academia and industry has to offer.

Attendees heard from Professor Paul Whiting, Chief Scientific Officer of UCL Drug Discovery Institute, who spoke of the open, collaborative and transparent approach the Institute will take in its work. The aim of the Institute is to unite expertise in academic research and industrial drug discovery to develop drug compounds that the team is confident could bring benefits for patients. The most promising compounds will then be ready to go through further development before they could enter clinical trials in people. Professor Whiting hailed a truly exciting time for dementia research, saying that the "starting gun had been fired". There is over 75 years of collective experience between Professor Whiting and the three Heads of Department that have joined him in recent months - Professor Paul Fish, Dr Jamie Bilsland and Dr Magda Bictash. They are continuing to build on that expertise by recruiting some of the most promising drug discovery scientists from across the UK.

The event also featured short talks from three dementia researchers working in different areas of science. Professor Ken Harris spoke of the importance of basic research using yeast and rodents to understand the fundamental biology of diseases like Alzheimer's. The basic understanding of how diseases work underpinned the advances that we are currently seeing in cancer and will do the same for neurodegenerative diseases. Professor Bart de Strooper, also an academic lead at the UCL Drug Discovery Institute, spoke of his work to understand the reasoning behind recent failed drug trials in Alzheimer's and how we can use this knowledge to improve future efforts. Professor Nick Fox, Director of the UCL Dementia Research Centre, reflected that one of the highest priorities for his patients was effective new treatments but to deliver these, "we need to understand what it is we're treating".

The successful event provided a platform for researchers and supporters of Alzheimer's Research UK to meet and discuss the work of the Drug Discovery Alliance and its potential to bolster current drug development efforts in dementia in the UK.