Uncertainty can cause more stress than inevitable pain

Knowing that there is a small chance of getting a painful electric shock can lead to significantly more stress than knowing that you will definitely be shocked, finds a new UCL study funded by the Medical Research Council (MRC). 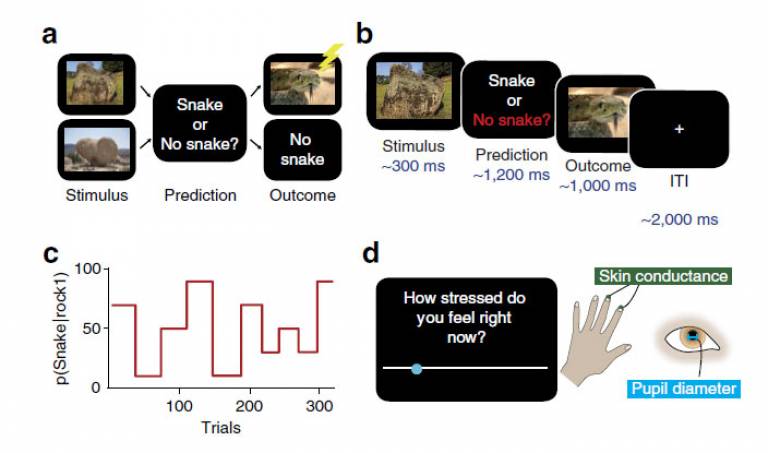 The study, published in Nature Communications, found that situations in which subjects had a 50% chance of receiving a shock were the most stressful while 0% and 100% chances were the least stressful. People whose stress levels tracked uncertainty more closely were better at guessing whether or not they would receive a shock, suggesting that stress may inform judgements of risk.

The experiment involved 45 volunteers who played a computer game in which they turned over rocks that might have snakes under them. They had to guess whether or not there would be a snake, and when there was they received a mildly painful electric shock on the hand. Over time they learned which rocks were most likely to harbour snakes, but those odds changed throughout the experiment, generating fluctuating levels of uncertainty.

Participants' uncertainty that any individual rock would have a snake under it was estimated from their guesses using a sophisticated computational model of learning. This uncertainty matched the stress levels reported by participants, which was also tracked using measurements of pupil dilation and perspiration.

"Using our model we could predict how stressed our subjects would be not just from whether they got shocks but how much uncertainty they had about those shocks," explains lead author Archy de Berker (UCL Institute of Neurology). "Our experiment allows us to draw conclusions about the effect of uncertainty on stress. It turns out that it's much worse not knowing you are going to get a shock than knowing you definitely will or won't. We saw exactly the same effects in our physiological measures - people sweat more and their pupils get bigger when they are more uncertain."

This is the first time that the effect of uncertainty on stress has been quantified, but the concept is likely to be familiar to many people.

"When applying for a job, you'll probably feel more relaxed if you think it's a long shot or if you're confident that it's in the bag," says co-author Dr Robb Rutledge (UCL Institute of Neurology and Max Planck UCL Centre for Computational Psychiatry and Ageing Research). "The most stressful scenario is when you really don't know. It's the uncertainty that makes us anxious. The same is likely to apply in many familiar situations, whether it's waiting for medical results or information on train delays."

Stress in the modern world is often seen as a negative and counterproductive response, but the study also found a potential benefit. People whose stress responses spiked the most at periods of greatest uncertainty were better at judging whether or not individual rocks would have snakes under them.

"From an evolutionary perspective, our finding that stress responses are tuned to environmental uncertainty suggests that it may have offered some survival benefit," explains senior author Dr Sven Bestmann (UCL Institute of Neurology). "Appropriate stress responses might be useful for learning about uncertain, dangerous things in the environment. Modern life comes with many potential sources of uncertainty and stress, but it has also introduced ways of addressing them. For example, taxi apps that show where a car is can offer peace of mind by reducing the uncertainty about when it will arrive. Real-time information boards at bus stops and train platforms perform a similar role, although this can be undermined by unspecified delays which cause stress for passengers and staff alike."