This week the spotlight is on Professor Raman Prinja, UCL Physics and Astronomy. 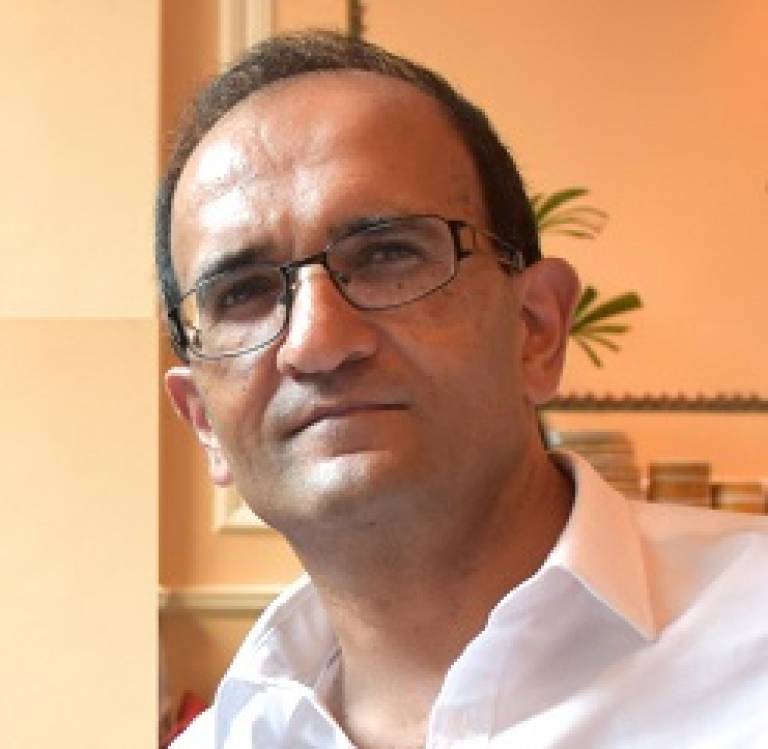 I am a professor of astrophysics in UCL Physics and Astronomy. My UCL life is split over several varied roles: with my group, I am researching the most awesome, massive stars in the Universe.

These stars truly live in the fast lane, with millions of times more luminous power than our Sun, leading to violent deaths as supernovae explosions. In these final acts, they spread life-giving chemical elements across the galaxies. Among the remnants leftover might be binary black holes that coalesce to generate the gravitational waves spectacularly discovered recently. Massive stars are a great reason to get out of bed in the morning!

Since 2011, I have been the Director of Teaching in the department. This role has involved working with colleagues to shape, re-shape, organise and achieve the delivery of high-quality teaching across our undergraduate and postgraduate taugt programmes, while also giving lectures myself (of course!). I dream of a National Student Survey satisfaction score that will make the Vice-Provost for Education & Student Affairs leap out of his chair, for the right reasons!

In a further management role, I'm currently Deputy Head of the department, working with the Head, Department Manager and many other colleagues to steer from REF to TEF and away from things naff.

In my 'spare time', I am keen to promote public engagement in the sciences, and one aspect of my recent effort has been to author several uutreach-level books for young readers (ages 9+). You can grab my night sky guides, four-metre foldout panoramic tours of the Universe, and books on the coolest things kids (and you) should know about Space on Amazon (other suppliers are also available!).

This is where my dinosaur heritage is revealed: I've been at UCL for almost 37 years, having arrived in 1979 as a wide-eyed, nervous and excited undergraduate. My longevity at UCL has been more by accident and fortune than design. It has been extremely interesting, and sometimes frustrating, attempting to evolve and develop my own progress alongside the rise of London's Global University, and its council's series of white, green, and recycled papers.

At UCL, I am particularly proud of my three teaching awards, which span 20 years. I'm honoured to have received these, primarily because they reflect the testaments from outstanding, and sometimes unforgiving, UCL undergraduate students. It is also pleasing to know that my teaching has been recognised as adapting successfully from the past days of squeaky chalk and blackboards, to increasingly opaque whiteboards, and onto PowerPoint, e-tools and learning to read and speak CALT!

Tell us about a project you are working on now that is top of your to-do list?

I'm starting the summer pushing on with our COBRaS project; nothing to do with snakes or a supply of cold beers (alas!). COBRaS is a UCL-led legacy radio astronomy project exploiting the UK's extremely powerful e-MERLIN array of radio telescopes to study the Cygnus association, Cyg OB2, which contains thousands of massive stars. Cyg OB2 is, indeed, not only very rich in stellar density but also in its diversity, and that is its attraction in this project. It is a fantastic laboratory for exploring the formation and evolution of massive stars in our galaxy.

I've also very recently published my latest children's book on astronomy, called 50 Things You Should Know About Space (QED Publishing). The book is packed with the latest and most important discoveries, lots of cool facts and fabulous images from amazingly powerful telescopes. I hope to get the book noticed and placed into school and public libraries, and then into the heads of young people, and their parents and teachers too! Perhaps 30 years from now, when a future astronaut about to embark on her first voyage to Mars is interviewed about what inspired her interest in Space, she may reply, "I got hooked when my parents bought me a cool book about Space written by some guy (Prinja, I think it was) many years ago"!

Album: Physical Graffiti by Led Zeppelin. It is masterful rock and a must for every young person wondering how an electric lead guitar, base or drums are supposed to be played!

Film: In Bruges - Colin Farrell and Ralph Fiennes at their darkest best. A great ride between crime thriller, tragedy, comedy and sensitivity. You'll need to watch it again, and again, to fully absorb all the layers and know when to laugh.

Novel: The Hitchhiker's Guide to the Galaxy by Douglas Adams - it's a very smart, funny book; and after all, if the world did end tomorrow, where indeed would you get your favourite drink?!

A cement mixer collided with a prison van on the Kingston bypass. Motorists are asked to be on the lookout for 16 hardened criminals. (R.I.P. Ronnie Corbett.)

Claudia Winkleman, Lee Mack, Omid Djalili and Lorraine Kelly - it's been a rough few weeks and months recently on planet Earth, and this gathering is sure to bring some much needed laughs and sidesplitting over dinner. There's also the added bonus that the guests might be interested in what I've been up to recently!

Take the initiative and don't just expect things to fall into place. You've got to get out there and make it happen.

I can clasp my hands to make a unique wind instrument that plays ghostly sounds and the odd (very odd) tune.

Holland Park in London. It's a fantastic escape from the city. A peaceful space, with a beautiful Japanese (Kyoto) garden, open-air opera, squirrels, fish and peacocks, all just a turning off Kensington High Street. (Just don't tell anyone else about it.)