The Large Underground Xenon (LUX) dark matter experiment has yielded no trace of a dark matter particle after completing its final 20-month long search of the universe, according to LUX collaboration scientists including UCL researchers. 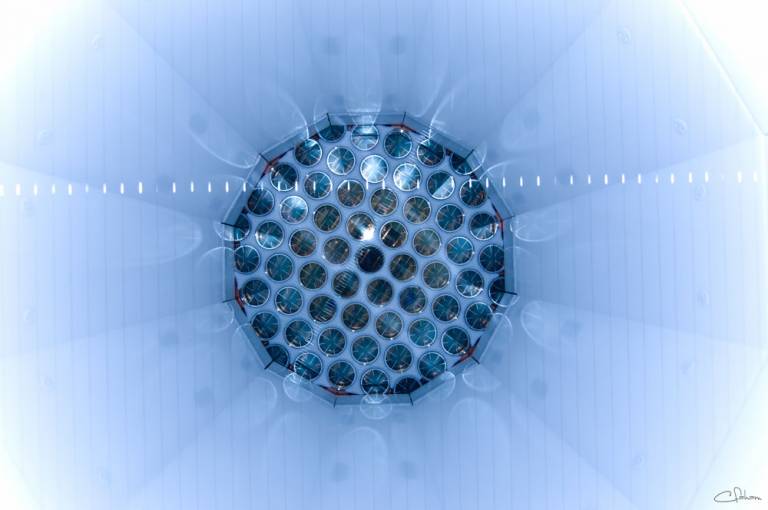 LUX's sensitivity far exceeded the goals for the project and the team are confident that if dark matter particles had interacted with the LUX's Xenon target, the detector would almost certainly have seen it. This finding enables scientists to confidently eliminate many potential models for dark matter particles, offering critical guidance for the next generation of experiments.

"The discovery of the nature of the elusive dark matter that accounts for more than four-fifths of the mass of the universe is internationally recognised as one of the highest priorities in science, and the LUX experiment is the world-leading experiment in the direct search of it," explained UCL LUX collaboration scientist Dr Cham Ghag (UCL Physics & Astronomy).

Scientists are confident that dark matter exists because the effects of its gravity can be seen in the rotation of galaxies and in the way light bends as it travels through the universe, but experiments have yet to make direct contact with a particle.

Dr Ghag added: "We've probed previously unexplored regions of parameter space with the aim of making the first definitive discovery of dark matter. Though a positive signal would have been welcome, nature was not so kind! Nonetheless, a null result is significant as it changes the landscape of the field by constraining models for what dark matter could be beyond anything that existed previously."

UCL researchers played a significant role in the LUX experiment since 2012 by performing key data analyses, as well as being part of the maintenance and calibrations effort on-site at the Sanford Underground Research Facility a mile beneath rock in in the Black Hills of South Dakota.

The LUX experiment was designed to look for weakly interacting massive particles, or WIMPs - the leading theoretical candidate for a dark matter particle. If the WIMP idea is correct, billions of these particles pass through your hand every second, and also through the Earth and everything on it. But because WIMPs interact so weakly with ordinary matter, this ghostly traverse goes entirely unnoticed.

"Pulse selection and identification is a vital part of the experiment as we're looking for an extremely rare event, so it's important to remove noise and events that do not exhibit signatures we expect to see from WIMP dark matter. We then used our findings to determine how efficient the detector is, and found that if a dark matter particle had hit the detector, we would have identified it."

Over the next few months, LUX scientists will continue to analyse the crucial data that LUX was able to provide, in hope of helping future experiments that finally pin down a dark matter particle. To continue the hunt for a dark matter particle, the UCL team is now working on the LUX-ZEPLIN (LZ) experiment that will succeed LUX and is presently under construction. LZ will be over 70 times more sensitive than LUX.

Dr Jim Dobson (UCL Physics & Astronomy), said: "We're responsible for ensuring the LZ experiment is constructed to unprecedented radio-purity requirements that limit background to extremely low levels in order to expose any signal from WIMPs hiding underneath. We must also accurately characterise the background pulses that do remain because before we can say we have detected WIMPs, we must know precisely what we expect from everything else. This will be crucial to ensure any future discoveries of dark matter are valid."

The LUX scientific collaboration is supported by the US Department of Energy and National Science Foundation and includes 20 research universities and national laboratories in the United States, the United Kingdom, and Portugal.