An immersive virtual reality therapy could help people with depression to be less critical and more compassionate towards themselves, reducing depressive symptoms, finds a new study from UCL and ICREA-University of Barcelona. 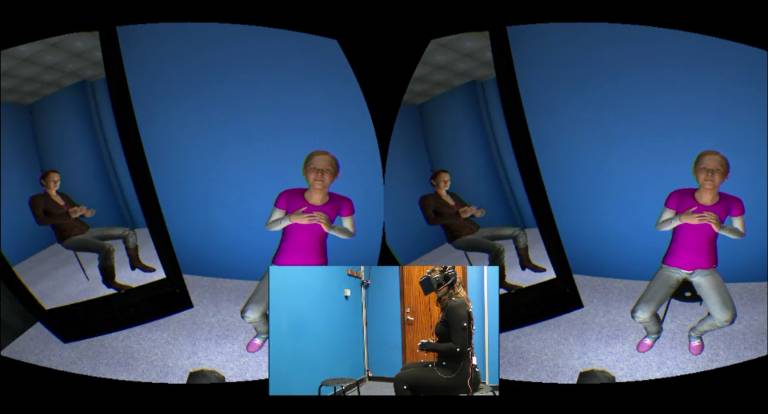 The therapy, previously tested by healthy volunteers, was used by 15 depression patients aged 23-61. Nine reported reduced depressive symptoms a month after the therapy, of whom four experienced a clinically significant drop in depression severity. The study is published in the British Journal of Psychiatry Open and was funded by the Medical Research Council.

Patients in the study wore a virtual reality headset to see from the perspective of a life-size 'avatar' or virtual body. Seeing this virtual body in a mirror moving in the same way as their own body typically produces the illusion that this is their own body. This is called 'embodiment'.

While embodied in an adult avatar, participants were trained to express compassion towards a distressed virtual child. As they talked to the child it appeared to gradually stop crying and respond positively to the compassion. After a few minutes the patients were embodied in the virtual child and saw the adult avatar deliver their own compassionate words and gestures to them. This brief 8-minute scenario was repeated three times at weekly intervals, and patients were followed up a month later.

"People who struggle with anxiety and depression can be excessively self-critical when things go wrong in their lives," explains study lead Professor Chris Brewin (UCL Clinical, Educational & Health Psychology). "In this study, by comforting the child and then hearing their own words back, patients are indirectly giving themselves compassion. The aim was to teach patients to be more compassionate towards themselves and less self-critical, and we saw promising results. A month after the study, several patients described how their experience had changed their response to real-life situations in which they would previously have been self-critical."

The study offers a promising proof-of-concept, but as a small trial without a control group it cannot show whether the intervention is responsible for the clinical improvement in patients.

"We now hope to develop the technique further to conduct a larger controlled trial, so that we can confidently determine any clinical benefit," says co-author Professor Mel Slater (ICREA-University of Barcelona and UCL Computer Science). "If a substantial benefit is seen, then this therapy could have huge potential. The recent marketing of low-cost home virtual reality systems means that methods such as this could potentially be part of every home and be used on a widespread basis."