How ice forms on the surfaces of mineral dust particles in the atmosphere has been revealed by a team from UCL and the Karlsruhe Institute of Technology (KIT) in Germany. 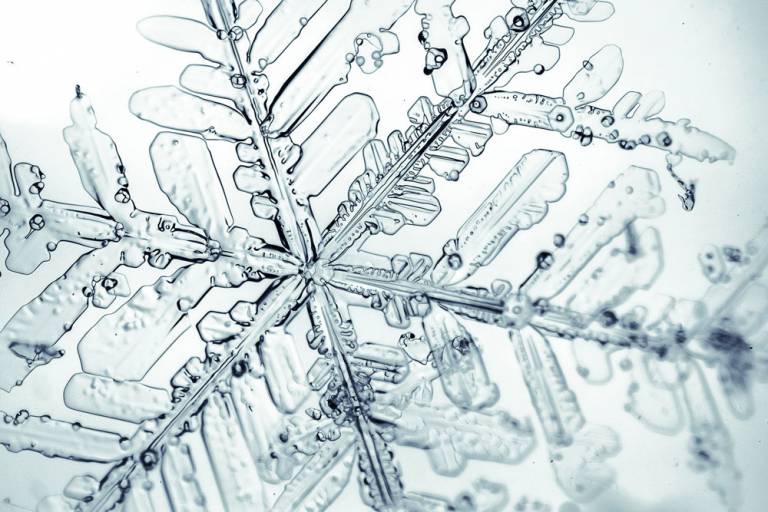 More than 90% of precipitation over land relies on the formation of ice crystals on airborne aerosol particles but why only a tiny fraction of all atmospheric particles can initiate ice growth is unknown. The scarce particles are crucial to Earth's climate as water in clouds can only freeze, generating rain, snow, sleet or hail, when they are present to act as a base from which ice crystals grow.

The study, published today in Science and funded by the European Research Council and Royal Society, found ice starts to form at exposed surface defects, such as edges, cracks and small depressions, on the surface of feldspar - an important mineral dust found in the atmosphere and known to help ice form in clouds.

"Feldspar is one of the most active atmospheric ice nucleating agents but why it is so good at making ice has remained unclear. By identifying the active sites for ice nucleation on feldspar, we've found an important piece of the puzzle of how ice and precipitation forms in clouds at a molecular level," said study co-author Professor Angelos Michaelides (UCL Physics & Astronomy and the London Centre for Nanotechnology).

The team used electron microscopy and computer simulations to understand how ice forms on feldspar at the microscopic level.

They found that ice didn't form on the smooth, crystalline faces of feldspar particles but at tiny microscopic surface defects that occur randomly over the surface of the particle. They also discovered that hydroxyl groups on the surface defects mediate the interaction between ice and the feldspar.

Co-author, PhD student Philipp Pedevilla (UCL Chemistry), said: "We found that the unique structure of feldspar surfaces within the microscopic defects provided an excellent template for ice growth, which might help explain why only a tiny fraction of particles have the right properties to facilitate ice formation.

"We were surprised to see that although the defects are randomly scattered across the particle surface, the ice crystals that grow do so in the same orientation. We now plan to see if the same process happens when ice forms on other classes of minerals."

Professor Thomas Leisner, study lead from KIT, concluded: "The findings of this study unravel the molecular details of ice formation at an important inorganic ice nucleus for the first time. We hope our new understanding will improve our ability to predict ice and precipitation formation in a changed climate with changed aerosol loading."