Signs of powerful changing winds have been detected on an exoplanet 16 times larger than Earth, according to a team involving UCL scientists. 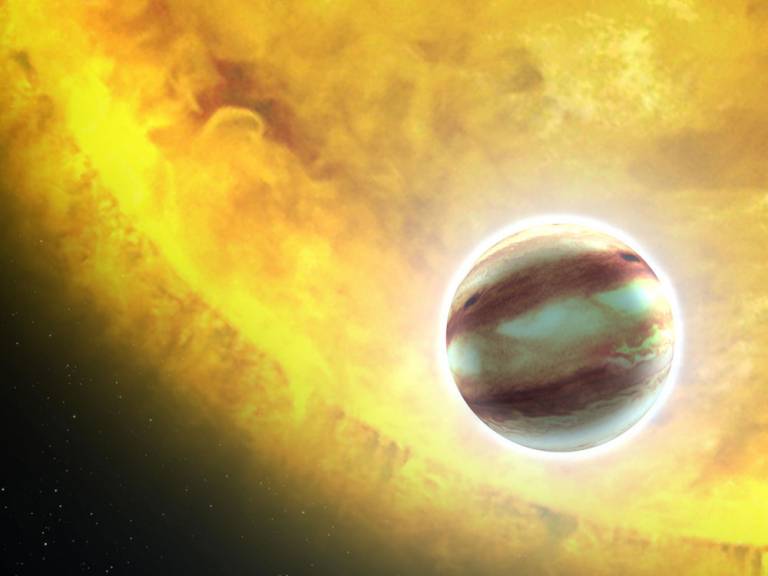 It's the first time that weather systems have been found on a gas giant outside the solar system.

Led by the University of Warwick, the researchers discovered that the gas giant HAT-P-7b, which is located over 1000 light years away, is affected by large scale changes in strong winds moving across the planet, likely leading to catastrophic storms.

For the study, published today in Nature Astronomy, the team monitored the light being reflected from the atmosphere of HAT-P-7b using NASA's space observatory, Kepler. They found that the brightest point of the planet shifts its position due to an equatorial jet with dramatically variable wind-speeds. The winds are so fast, they are capable of pushing vast amounts of cloud across the planet.

The researchers say the clouds themselves would be visually stunning - likely made of up corundum, the mineral which forms rubies and sapphires - but the planet could never be inhabited because of its likely violent weather systems, and unaccommodating temperatures.

Dr David Armstrong from Warwick's Astrophysics Group who led the work, said: "HAT-P-7b is a tidally locked planet, with the same side always facing its star. We expect clouds to form on the cold night side of the planet, but they would evaporate quickly on the hot dayside. These results show that strong winds circle the planet, transporting clouds from the night side to the dayside. The winds change speed dramatically, leading to huge cloud formations building up then dying away."

First discovered in 2008, HAT-P-7b is an exoplanet 40% larger than Jupiter located 320 parsecs or 1043.7 light years away from Earth, orbiting a star twice as large as the Sun.

The astrophysicists behind the study can now begin to explore how weather systems on other planets outside our solar system change over time.

Dr Joanna Barstow from UCL Physics & Astronomy, a co-author on the study, said: "This discovery demonstrates just how influential clouds can be on exoplanet conditions, even for extremely hot worlds like HAT-P-7b. It will be very interesting to see if similar effects are observed on other hot Jupiters."

The work was led by the University of Warwick, and involved a team of scientists from Warwick, Queens University Belfast, Dublin City University and UCL. UCL's contribution was kindly funded by the European Research Council.