Working with Saracens to monitor concussion in rugby

A team of UCL researchers have joined the ongoing Saracens study for the 2015/16 season, which combines impact sensors with blood samples to determine the effects of concussion on rugby players. 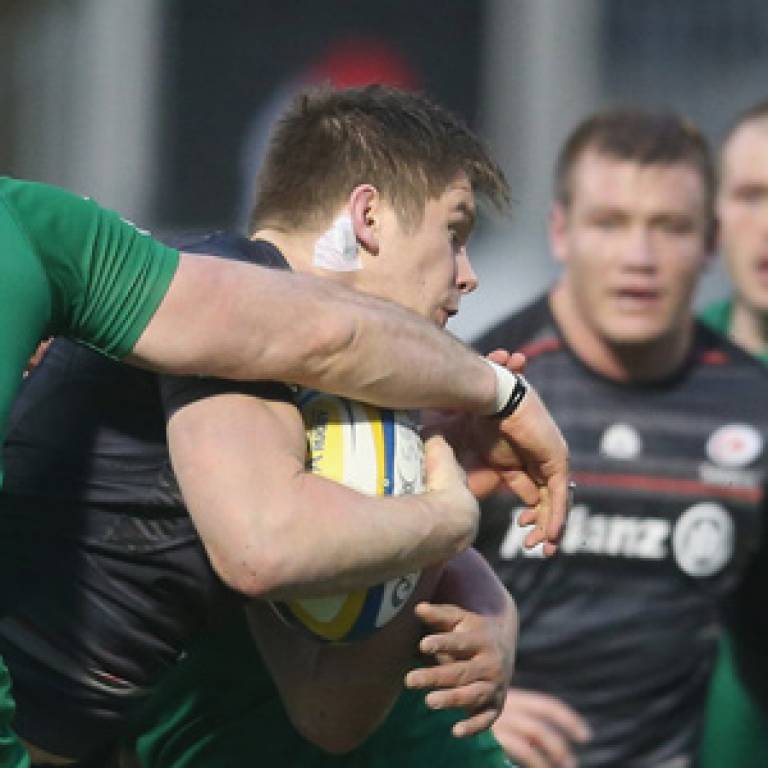 In January, following an approach from James Drake of The Drake Foundation to set up a research project to study the effects of concussion, Saracens players began wearing impact sensors produced by X2 Bio-systems in Seattle which measure the force and direction of impact to the head.

The Drake Foundation have now extended the funding of the study so that from the start of the new Aviva Premiership season, players' blood samples will be analysed to detect biomarkers associated with brain injury.

The data will be collected by researchers at the UCL Institute of Neurology under the guidance of Professor Huw Morris and Professor John Hardy, assisted by Professor Henrik Zetterberg who has studied the effects of concussion in ice hockey.

Saracens Head of Medical Joe Collins believes that the use of blood biomarkers, which are commonly used to detect illness and disease but can also detect brain injury, will significantly widen the range of the ongoing study.

We are very excited to be involved in this study. We have a lot to learn about the effects of head injury and concussion.

He said: "The impact sensors have been providing us with data during matches and training but analysing players' blood biomarkers in conjunction with neuro-imaging and psychometric testing will greatly expand this study. This is such a complex subject, we hope this is another step forward as we look to increase our understanding. We have a duty to look after our players, and nothing is more important than their welfare."

James Drake, Chairman and Founder of The Drake Foundation, comments: "We are excited to collaborate with Saracens and UCL in realizing our initial idea for this study and to advance research in sports-related concussions. There is a pressing need to understand better the biology of head injuries, and we hope that the results will give evidence-based facts to improve measures for participant safety in contact sports."

Professor Huw Morris (UCL Institute of Neurology) said: "We are very excited to be involved in this study. We have a lot to learn about the effects of head injury and concussion. We believe that some aspects of head injury can be measured using blood tests. We hope that this work will help us to improve player safety in the future."