A molecule important in blood vessel formation and brain wiring is also essential for the onset of puberty, finds new research led by UCL and the University of Milan. 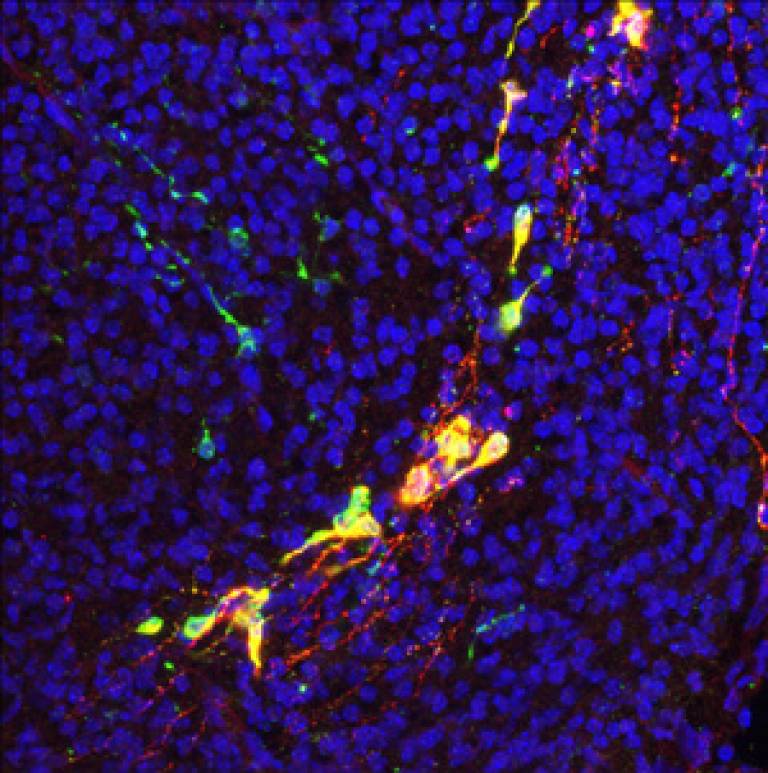 The researchers found a genetic fault that prevented this molecule, called SEMA3E, from being working correctly in two brothers with Kallman Syndrome, an inherited condition that prevents people from undergoing puberty or being able to smell. They then studied mice without SEMA3E to see how its loss affected their development.

SEMA3E was found to protect the nerve cells that regulate sexual reproduction. These nerve cells grow in the nose of developing foetuses and then migrate to the brain where they produce gonadotropin releasing hormone (GnRH), which is needed to stimulate puberty. The research showed that these GnRH-producing nerve cells could not survive the migration without SEMA3E to protect them.

The new study, published in the Journal of Clinical Investigation, pinpointed genes responsible for Kallmann Syndrome in the two brothers and then verified the effect in tissue culture and mouse models. The cause of Kallmann Syndrome remains unknown in 60% of cases, so the techniques used in the study could be used to identify new genetic causes. The work, funded by the UK Biotechnology and Biological Sciences Research Council (BBSRC) and Italian Fondazione Telethon, also gives doctors a new confirmed genetic cause that patients could be tested for.

We have not only found a new gene to screen for, but also demonstrated a method that can be used to reliably identify many more in future.

Kallmann Syndrome is a rare condition estimated to affect around 1 in 10,000 men and 1 in 50,000 women. It can be treated with hormone injections if diagnosed early enough, but it is difficult to confirm cases because only 40% of the genetic mutations that can cause it have been identified. The latest study not only adds to the known mutations that can be tested for, but also offers a new method to test 'unknown' cases in search of new mutations.

"By combining clinical and laboratory approaches, we were able to go far beyond simply identifying 'candidate' genes that might be linked to a given disease," explains senior author Professor Christiana Ruhrberg (UCL Institute of Ophthalmology). "Many genetic studies rely on statistical correlations from thousands of patients, making it difficult to study rare diseases such as Kallmann Syndrome. We managed to confirm genetic causes using blood samples from just two brothers with the condition, born two years apart. By recreating the mutations and testing them in neuronal cells in tissue culture and by examining mice born without the genes that were mutated in both brothers, we found concrete evidence showing how these mutations actually cause the condition."

The study demonstrates a powerful method for identifying the causes of genetic conditions without relying on large statistical samples. This could be applied at clinical research centres studying many rare diseases, including Kallmann Syndrome, to identify mutations that people could be screened for.

"Kallmann Syndrome can be treated with hormone injections if caught early enough, but it is difficult to diagnose," says lead author Dr Anna Cariboni (UCL Institute of Ophthalmology and University of Milan). "Since only 40% of cases can be genetically diagnosed, doctors often won't know whether a teenage child is going to start puberty late or not at all. We have not only found a new gene to screen for, but also demonstrated a method that can be used to reliably identify many more in future."