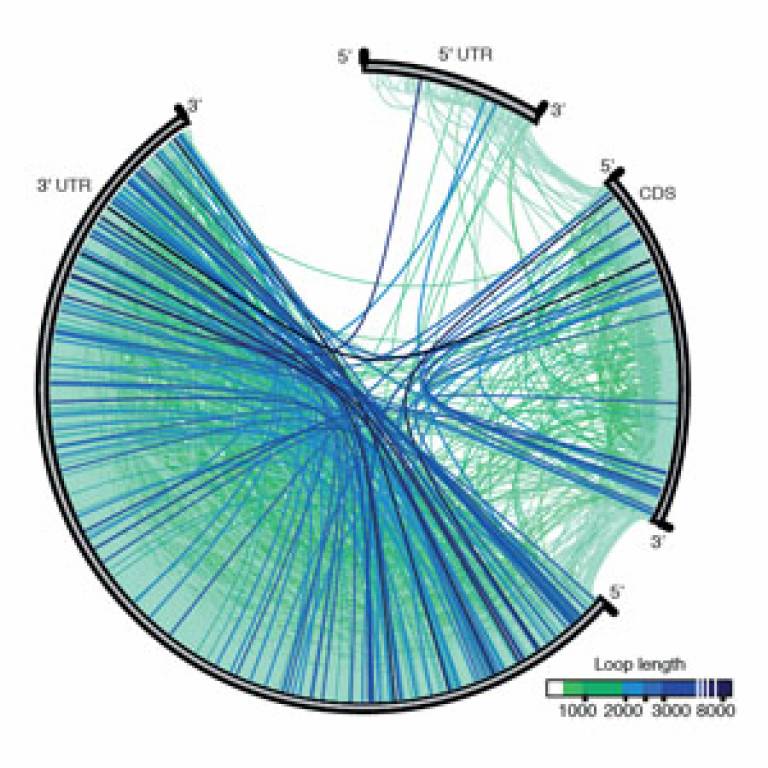 A new study by UCL researchers has shown how the three-dimensional structures of mRNAs determine their stability and efficiency inside cells. This new knowledge could help to explain how seemingly minor mutations that alter mRNA structure might cause things to go wrong in neurodegenerative diseases like Alzheimer's.

mRNAs carry genetic information from DNA to be translated into proteins. They are generated as long chains of molecules, but they fold up into complex structures by making connections between different sections of the chain. Despite the importance of these structures to how mRNAs function, very little was known about them until now.

The study published in Nature reports a new technique allowing scientists to identify connections that hook sections of an mRNA together. "We were amazed to find that mRNAs make thousands of connections inside living cells", says Professor Jernej Ule (UCL Institute of Neurology) who led the research together with Professor Nicholas Luscombe (UCL Genetics Institute). "Sometimes these connections hook together very distant parts of mRNA molecules." Further investigation showed that these connections affect how mRNAs interact with other molecules inside cells, and so influence how much protein they eventually produce.

A particularly important connection is found in an mRNA that codes for a protein called X-box binding protein 1. "This protein enables our cells respond to stress. The amount of this protein in cells is tightly controlled, but when this control is lost, it can contribute to neurodegenerative diseases such as Alzheimer's," explains the study author Yoichiro Sugimoto, who was a PhD student with Ule at the Medical Research Council Laboratory of Medical Biology in Cambridge. "The connection we found in the mRNA helps to ensure that the right amount of protein is produced."

Genetic mutations in mRNAs can lead to faulty connections and cause the wrong amounts of protein to be produced. This suggests that a wide range of human diseases could be caused by such mutations. "The NHS's 100,000 Genomes Project is helping us discover where potentially harmful mutations happen in the human genome," says Professor Luscombe. "Finding those mutations that impact mRNA structure will help us understand why things go wrong in diseases like Alzheimer's and cancer."

"This has great potential!" adds Professor Ule. "Because understanding the genetic cause is the first step towards finding new ways to treat these diseases".

The study was supported by the Medical Research Council, Cancer Research UK and the Wellcome Trust.