Computer reconstruction of human fossil sheds light on our origins

The fossil of Homo habilis, or 'handy man', has undergone state-of-the-art computer reconstruction, revealing new information about its jaw shape which indicates the species has older evolutionary roots than previously thought and shows that three different Homo species existed between 2. 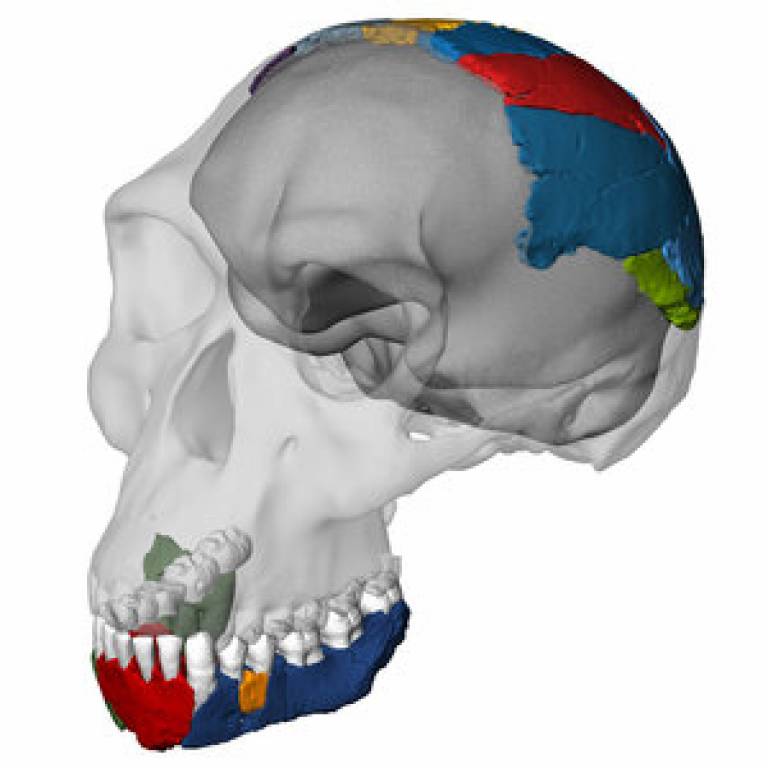 1 and 1.6 million years ago, according to UCL researchers who led the study.

The original handy man fossil, Olduvai Hominid 7 (OH 7), was found in 1.8 million-year-old layers exposed in Olduvai Gorge, Tanzania and consists of a distorted lower jaw, a partial braincase made up of many broken fragments and hand bones of a single individual.

Since it was first published in 1964, scientists have tried to work out which other fossils also belong to Homo habilis, but this has been challenging due to the preservation of OH 7. The researchers used computed tomography (CT) and state-of-the-art 3D imaging technology to digitize, tease apart and reassemble the pieces virtually.

The findings, published today in Nature, shed light on the early evolution of the human lineage and uncover what makes Homo habilis truly distinctive - its primitive jaw shape. The research by UCL and the Max Planck Institute for Evolutionary Anthropology, Germany, in collaboration with the National Museums of Tanzania, was funded by the Max Planck Society.

Lead author Professor Fred Spoor (UCL Cell and Developmental Biology and the Max Planck Institute of Evolutionary Anthropology), said: "From painstakingly reconstructing the fossil fragments of OH 7, we found an unexpected mixture of features that allowed us to compare it with other fossils for the first time. We found the lower jaw is primitive in shape with a long and narrow dental arch like the much older species Australopithecus afarensis, known from the skeleton 'Lucy', but the braincase is not primitive at all, showing that the brain size was larger than previously estimated and similar to that seen in Homo erectus."

From painstakingly reconstructing the fossil fragments of OH 7, we found an unexpected mixture of features that allowed us to compare it with other fossils for the first time.

Comparing the fossils highlighted the large differences in jaw shape among early Homo fossils, showing that three different species existed between 2.1 and 1.6 million years ago: Homo habilis, Homo erectus and Homo rudolfensis. Previously, it was thought that differences in brain size were important to characterize species of early Homo but the new research shows that the three species cannot be distinguished in this way, but they can be told apart by differences in their facial appearance.

Joint lead author, Dr Philipp Gunz (Max Planck Institute for Evolutionary Anthropology), said: "Sophisticated statistical analyses reveal differences in the shape of the jaw between these early human species that are sometimes as large as between humans and chimpanzees."

The new findings also provide insights into the evolutionary origins of Homo habilis and the genus Homo. An upper jaw bone from Ethiopia called 'AL 666-1' and dated to 2.3 million years ago, was thought to be a potential ancestor to Homo habilis but from comparing this fossil to OH 7, it is too modern human-like in shape in contrast to Homo habilis' primitive jaw. This suggests the two fossils from Ethiopia and Tanzania follow separate evolutionary lineages that likely split at a common ancestor well before 2.3 million years ago.

The common ancestor remained elusive until this week, when another study led by honorary UCL research fellow Dr Brian Villmoare (UCL Anthropology and University of Nevada, Las Vegas) discovered a 2.8 million-year-old lower jaw in Ledi-Geraru, Ethiopia, which now provides the earliest evidence of the genus Homo. The fossil, known as LD 350-1, makes a good ancestor for Homo habilis and other species of early Homo.

Dr Villmoare said: "LD 350-1 reveals that many of the anatomical patterns we see in 2 million-year old Homo were established much earlier in the evolution of the genus.  At 2.8 million years ago we see relatively evolved Homo traits in combination with other much more primitive anatomical features, a result that is particularly interesting in light of the shape of the OH 7 reconstruction."

Professor Spoor concluded: "By digitally exploring what Homo habilis really looked like we could infer the nature of its ancestor, but no such fossils were known. Now the Ledi-Geraru jaw has turned up as if 'on request', suggesting a plausible evolutionary link between Australopithecus afarensis and Homo habilis."