This week the spotlight is on Professor Chris Husbands, Director, UCL Institute of Education and UCL Vice-Provost, Academic Development. 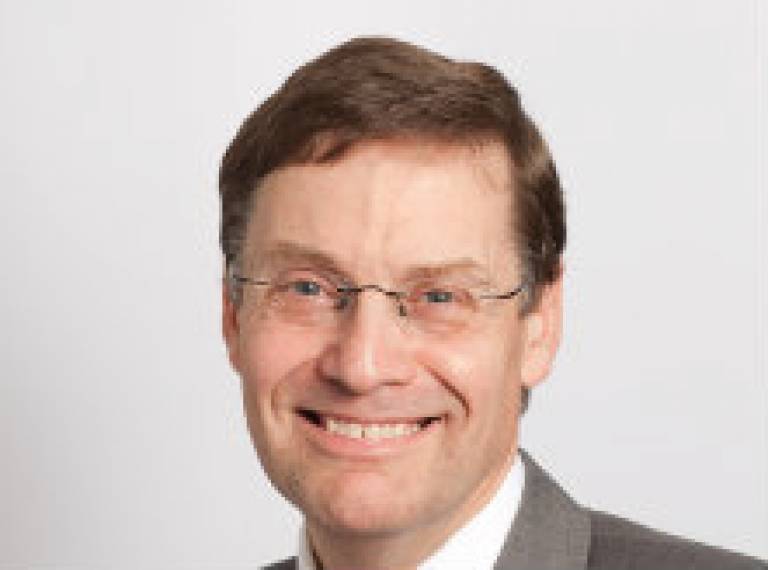 I'm Director of the UCL Institute of Education - which should sound straightforward enough - so I run the IOE, but the merger between IOE and UCL is obviously shifting the way in which we all work.

The IOE is itself a large, complex institution. It was founded in 1902 as the London Day Training College for Teachers, and initial teacher education is still an important part of what the IOE does. But - and many people are often surprised by this - teacher education makes up only about a fifth of the IOE's work. It's still extremely important to us, and makes us the largest provider of postgraduate teacher education in the United Kingdom, but we do much, much else besides: we account for about 40% of all the education research undertaken in England; we are one of the UK's top five social science research centres, with strengths ranging from quantitative social science, through family and child research to health education and beyond. And we are one of the world's leading centres for education research and development, with the largest number of international education students in the UK and research and consultancy contracts on - I used to say every continent except Antarctica, until I discovered an environmental education project which involved links with Antarctic surveys. The IOE is like an educational Tardis - much bigger on the inside than out, and you never quite know where it's going to land next. So leading the IOE is a major priority.

There are some real delights of being director of the IOE: because we are the lead national institution for education and related social science, I can find myself, in the course of a working week moving from the predictable areas of budgets, people management and strategic planning, to dealing with UK politicians from any of the major parties on education policy issues to working with teachers and headteachers, to speaking to international delegations or to travelling widely - I've now been in schools and universities in over 35 countries on four continents.

The merger with UCL enables us to deliver our mission through much stronger interdisciplinary links and far more robust connections across the full range of arts, humanities, and sciences, as well as social science work across UCL. It enables us, as an almost entirely postgraduate institution, to grow undergraduate work much more quickly.

As well as my continuing role in the IOE, I shall also be a UCL Vice Provost, with overall responsibility for academic development: for academic career development, for reward, performance and so on and for equality and diversity. I'm looking forward to taking forward these agendas - critical to the long-term health of any university community.

So the short, and precise answer is that I joined UCL, together with the thousand other IOE employees, on 2 December 2014, which makes me the newest of newcomers, still finding my way around the Bloomsbury campus, let alone other UCL sites. I have been Director of the IOE since January 2011, and had previously led Schools of Education at Warwick University and at the University of East Anglia. My professional career began in secondary school teaching: I taught history in urban comprehensive schools. I always say that I started my learning when I started to teach - and one classroom moment catches what I mean. I was teaching a low attaining group of 12 year olds and for some reason best known to me at the time the class were labelling a picture of a medieval monastery. One boy called me over "'Ere, sir", he said "what did they use for bog paper?" Armed with a history degree and a PhD, I thought I knew the answer to this, so I told him that they used leaves. Quick as a flash, he said "So, what did they use in winter then? Holly?" It was one of the moments when I realised that those we teach look at the world and think about the world quite differently. If you don't understand that, you have no prospect of teaching people anything.

My academic interests lie in education policy and, in particular policy on teaching and learning. I'm interested in how, at classroom, school, national and international scales we can develop policy interventions which improve teaching and thus improve outcomes for children and young people. There is some lazy policy made - the current, often quoted line is that 'the quality of an education system cannot exceed the quality of its teachers'. But that has to be wrong: we can all teach well, and we can all teach badly. So the challenge is not about teachers - not about recruiting better people or sacking the ones we currently have - but about teaching - how we improve teaching, how we can design policies, practices and schools which mean that teachers improve: everyone, teaching better today than they did yesterday, teaching better tomorrow than they did today. There are things we know reasonably well about how to do this, but there are few short cuts.

I've had a career quite different from that I might have imagined: I've worked in and with teachers, classrooms, universities and governments around the world. It's a world of complexity and difference, but the core of it - the need to understand others' point of view and starting point before any progress can be made is as true in Lagos or Lahore as in London.

So I should begin by talking about the IOE-UCL merger: a huge and complex challenge which involved leading the entire IOE through a process which raised challenging questions about identity, change, structures, aspirations and possibilities. It involved building the trust of teams about who to ask and answer questions. There were difficulties and challenges throughout, but I ended the process being incredibly impressed and proud by what the IOE had achieved and the way it had done it, and humbled by the commitment and dedication shown by my team.

Beyond that, the last year has been hugely successful for the IOE: ranked number 1 in the QS world education rankings; shortlisted for the Times Higher University of the year, with outstanding results in student surveys. What makes me proud in all this is the way these achievements always result from team work, from groups of people inspiring and challenging each other. My privilege is to work with enormously committed people, and commitment enables them to achieve great things.

And of course the IOE-UCL merger is not really complete. One of my international colleagues said to me that no merger is ever over - it simply continues. We need to make what is now an administrative and financial reality into a dynamic academic reality: we have the opportunity to do something which no-one else has had the chance to do - not to develop a new faculty of education in a multi-faculty university, but to place cutting edge social science and education at the core of developments in a world-leading university. The challenge - for all of us - will be to keep our aspirations high and to engineer the sorts of teaching, research and knowledge exchange opportunities which will deliver those aspirations. There are no good templates around - the opportunities are exciting,

At the same time, I will need to develop my Vice Provost role, and to work closely with colleagues right across UCL to understand the dynamics of academic development in very different departments and faculties. I've worked in multi-faculty universities before and am looking forward to working across disciplines again.

So not really an album, but there are two pieces of music I come back to again and again. Thomas Tallis was a sixteenth century composer and his masterpiece is Spem in Alium - a motet written for eight choirs each of five voices, so for 40 parts which, over about nine minutes intertwine in great beauty. I remember taking my eldest daughter to a university open day and we wandered into a gallery which had an installation, piping each voice in the motet through a different speaker, the speakers arranged in a circle - real tingle down the spine stuff. And then quite different - Samuel Barber's setting of a prose text by James Agee, Knoxville, Summer of 1915. The music, by turns simple and complex, catches the memory of childhood and of a world which, when the music was written in the 1940s had gone completely. But if you want an album - I was a teenager in the 1970s, and I'll go for David Bowie, Heroes.

I'll choose a box set for my film: it has to be The West Wing - superbly scripted, outstandingly acted, and the White House many of us would want to imagine, moving from grubby deals to soaring emotion. It can watched over and over again.

Choosing one novel is very difficult, and the list would change every week, or even day. But there are books I keep coming back to again and again: Julian Barnes' History of the World in Ten and a Half Chapters, which is playful and thought-provoking at the same time; Anne Michaels' wonderful, linguistically rich Fugitive Pieces, or, for sheer relaxation, anything by Donna Leon.

So I think I have a free hand here: dead or alive, from anywhere in the world, which makes it difficult. Does a collection of really interesting people ever really gel? But, for starters, an eclectic group which might find interesting things to say to each other - Mary Anne Evans, who in the nineteenth century wrote as George Eliot novels of fierce intelligence and penetrating humanity, Mike Brearley, cricket captain and psychoanalyst, Leonard Bernstein, conductor and composer, Atul Gawande, surgeon and journalist, Jan Morris, travel writer and historian, Jacob Bronowski, scientist and broadcaster. That's perhaps enough for a fabulous conversation.

But if they aren't available, I'll settle for a family dinner with our four daughters - all, always, with things to say.

No-one you are dealing with is ever as confident as they appear to be.

I asked my family about this and they said I should tell the story of my arrest at the Gare du Nord in Paris. Together with my wife and two of my children, I'd got off the train with several cases. We hauled them out to the taxi rank and waited for a taxi. When it arrived, a case was missing. I told the family to wait while I ran in to find it, only to find the centre of the Gare du Nord sealed off with blue tape and a clutch of machine-gun-wielding gendarmes pointing their weapons at the bag containing our walking boots. My cries of "C'est ma valise" were to no avail. When I protested that my family were waiting for me, one of the gendarmes, in the time-honoured phrase of policemen simply said "You're not going anywhere". It turned out I had committed an offence under the French penal code by 'abandoning' baggage in a station. I was marched (at gunpoint) out to the waiting family to collect my passport (one of the girls immediately texted her sisters, who were off inter-railing to say "Guess what! Dad's been arrested"), and then off to a cashpoint machine to pay a hefty on-the-spot fine, an amount which I have always been slightly hazy about in accounts to my wife.

Any second-hand bookshop will do, but if you want me to pin down a specific place, it's probably Blakeney Marshes.