On 14 January, I attended a reception to launch the centenary year of the UCL School of Slavonic &amp; East European Studies, more commonly known by its acronym, SSEES. 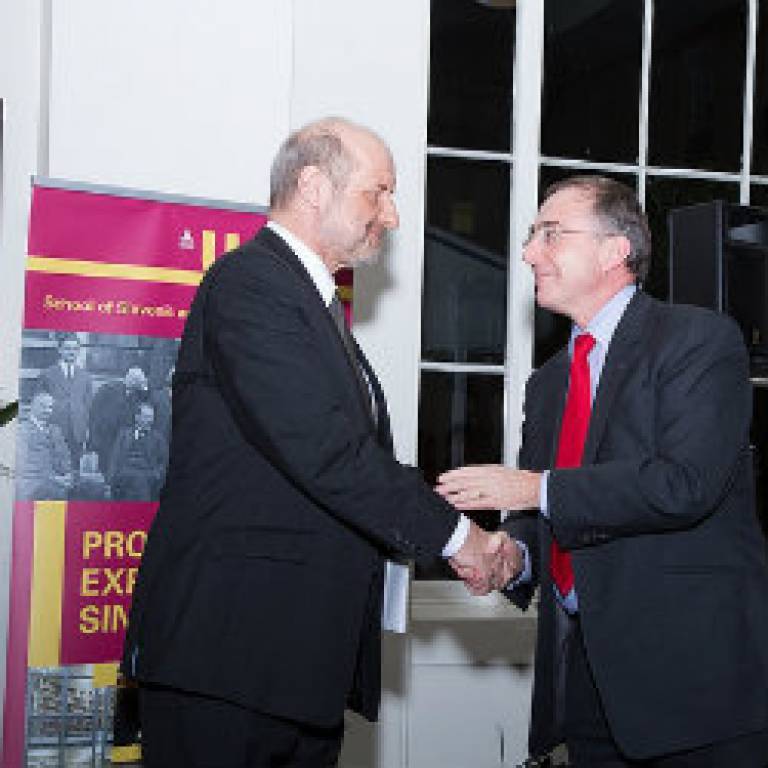 SSEES joined the UCL community in August 1999, before which it was an independent School within the University of London.

The idea for the school became a reality in March 1915, due partly to historian Robert William Seton-Watson, who had travelled extensively in the countries of the former Austro-Hungarian empire and had connections with every political leader across the region.

Seton-Watson wanted to change Whitehall perceptions of the region at a time when it was possible for informed enthusiasts to influence government. He proposed organising a Slavonic School at King's College to the Principal, Ronald Burrows, "to remedy the neglect of Slavonic and East European Studies in the UK".

The school was formally approved to be established at King's on 13 July 1915 and became an Independent University Institute in 1932, thanks to the Director Bernard Pares.

Pares, also an historian, was known for his work on Russia. He was appointed official observer to the Russian army on the outbreak of the First World War and was later seconded to the staff of the British Embassy in Petrograd. For his services, he was awarded a KBE in 1919.

The school was officially inaugurated on 19 October 1915 by politician, sociologist and philosopher Tomáš G. Masaryk who delivered the speech, "The Problem of Small Nations in the European Crisis". Masaryk, who would later become Czechoslovakia's first president, always hoped that the school would assist in establishing closer relations between Britain and the Slavs. By the end of 1915, the school had 20 language and history students and a staff of four.

From these modest beginnings, SSEES has grown into the dynamic international community that it is today, with almost 1,000 students from 55 countries, spread from undergraduate study to doctoral research. The range of courses has expanded and now covers economics and business; history; languages and culture; and politics and sociology.

The school moved from its University of London Senate House accommodation in 2005 to an innovative, award-winning building on Taviton Street - perhaps best known for its central light well. Around this structure sits SSEES's major research library of print, archive, film and electronic resources, which has attracted scholars from all over the world.

In the foyer, a glass cabinet displays a silver punchbowl and salver with little goblets, each bearing the name of a member of the delegation from the Third Russian Duma, whose visit to the UK in 1909 had been organised by Sir Bernard Pares.

The visit was intended to "mark a feeling of cordial goodwill between the two countries and the desire on both sides for closer relations, intellectual, political, social and commercial".

The lively academic community that has grown up over the past 100 years is reflected in the frequent public seminars and conferences held at SSEES on all aspects of Russia and Central and Eastern Europe featuring politicians, filmmakers, writers, diplomats, journalists and members of the business community.

To celebrate its 100 years, SSEES will be hosting events throughout 2015 including lectures, conferences, musical concerts and a film festival. To coincide with the centenary, SSEES is launching a new History, Politics and Economics BA for entry this September.

Present at the launch reception were six ambassadors from the countries of the 'SSEES region' and many former members of staff including Professor Norman Davies, who was nominated this year for an Honorary Degree from UCL. I was particularly pleased to meet members of the families of Sir Bernard Pares and Robert Seton-Watson.

I was also delighted to introduce the new director, Professor Jan Kubik (pictured), and impressed by his speech in which he reiterated that SSEES was on the side of Herodotus who understood the significance of cultures and histories, their distinctiveness.

Jan also referred to the principles elaborated by "the founding intellectual father of UCL, Jeremy Bentham: the utility of an approach is not measured by its truth value, at least not alone, but by its ability to solve problems."

The school was created as a response to an urgent practical need - the need of two communities: policymakers in this country and the "revolutionaries" in East and Central Europe. He went on: "SSEES has always stood on two legs. One is the school's relentless effort to be relevant outside of the Ivory Tower. Today, it is called 'impact'. In a more elegant world of yesterday, it was called public service."

From its inception, the school has sought to engage a part of the world in a manner that combines striving for general knowledge with a thoughtful consideration of local/regional specificity. SSEES graduates are everywhere: from academia to business and politics, and include prime ministers, parliamentarians, officials and more.

"We are heirs to a venerable tradition, providing us with a powerful and unique intellectual, practical and ethical foundation." The high mission to serve has always been at the very essence of SSEES and Jan concluded that this mission would continue, "responding to new challenges, yet mindful of where we come from."

I congratulate SSEES on its many achievements and would like to invite everyone to join me in celebrating its centenary.