Patterns created by the brain's grid cells, which are believed to guide navigation, are modified by the shape of the environment, according to UCL researchers. 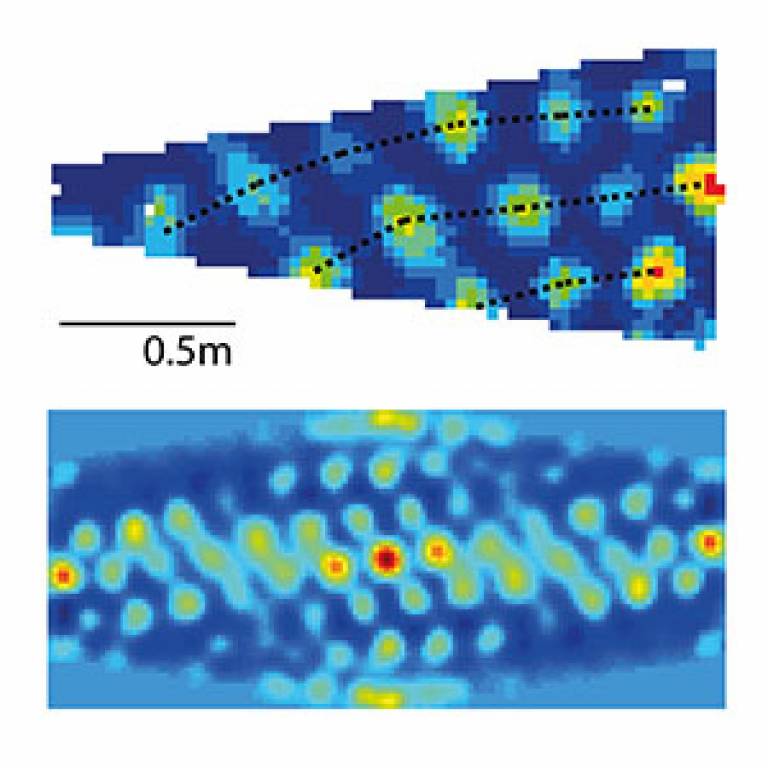 This means grid patterns aren't a universal metric for the brain's GPS system to measure distance, as previously thought.

Grid cells in the brain appear to form an internal map of the local environment by signalling periodically to create a 'grid-pattern' that helps animals to navigate, even in the dark. Until now, it was believed that all grid patterns were hexagonal, providing the brain with uniformly spaced regions across which distances could be measured. The new research dispels this theory as it shows grid patterns distort to align with the local environment's geometry, changing the distances between grid-regions.

The leading author, Dr Julija Krupic (UCL Cell & Developmental Biology), said: "If you imagine the pattern made by grid cells is a ruler for our brains to measure distance, we're seeing the ruler bending and stretching depending on the geometry of our external environment. This causes grid patterns to change markedly between enclosures of different shapes and within the same enclosure."

The study in rats, published in Nature today and funded by the Wellcome Trust and the Gatsby Charitable Foundation, shows that the structure of the grid pattern is responsive to environmental shape to such an extent that highly polarised trapezoid-shaped environments cause the usual hexagonal grid pattern to break as the grid aligns to the enclosure walls.

If you imagine the pattern made by grid cells is a ruler for our brains to measure distance, we're seeing the ruler bending and stretching depending on the geometry of our external environment.

The scientists studied the grid patterns created in the entorhinal cortex part of the brain of 41 rats as they foraged in circular, square or trapezoid shaped environments. They found grid patterns aligned at an angle of 8.8° to the walls in polarized enclosures and discovered that this influence was strong enough to cause distortions in trapezoid shaped spaces.

The team investigated whether the changes in patterns were caused by external cues such as visual landmarks, textures and smells, or altered behaviour in the speed or directional movement of the rats, and found the primary influence was the impact of environmental geometry.

Co-first-author, Dr Marius Bauza (UCL Cell & Developmental Biology), said: "We were surprised to see how important environmental boundaries are in permanently changing grid patterns and just how local the activity of grid cells is. We found those anatomically close to each other in the entorhinal cortex responded coherently. We're planning to use this new information to refine the mathematical models we've developed to help us understand the behaviour of grid cells and how grid patterns form."

Professor John O'Keefe (UCL Cell & Developmental Biology, Director of the Sainsbury Wellcome Centre and Nobel Prize laureate in Medicine or Physiology 2014), senior author on the paper, said: "We know that other cells involved in the brain's GPS system such as place cells and boundary cells are affected by environmental geometry and now we see the same is true for grid cells. It might be that grid patterns aren't used as a ruler by the brain and are doing something different. Of course, they may still be trying to measure distance in trapezoids but this is now distorted, leading to the interesting idea that our brains perceive distance differently in environments with polarised geometry. Our next step will be to find out why grid patterns change based on our environment and what this means for the role of grid cells in helping us navigate and form memories."