A new test for detecting multiple explosives simultaneously has been developed by UCL scientists. 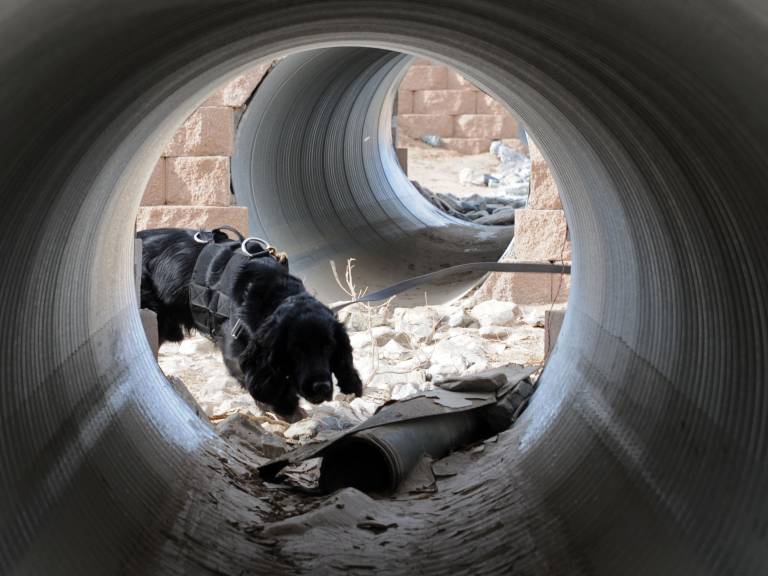 The proof-of-concept sensor is designed to quickly identify and quantify five commonly used explosives in solution to help track toxic contamination in waste water and improve the safety of public spaces.

Lead researcher, Dr William Peveler (UCL Chemistry), said: "This is the first time multiple explosives have been detected using a single sensor before, demonstrating proof-of-concept for this approach. Our sensor changes colour within 10 seconds to give information about how much and what explosives are present in a sample. Following further development, we hope it will be used to quickly analyse the nature of threats and inform tailored responses."

The study, published today in ACS Nano and funded by the Engineering and Physical Sciences Research Council (EPSRC), used a fluorescent sensor to detect and differentiate between DNT, TNT, tetryl, RDX and PETN by reading unique colour change 'fingerprints' for each compound.

Dr Peveler, added: "We analysed explosives which are commonly used for industrial and military purposes to create a useful tool for environmental and security monitoring. For example, DNT is a breakdown product from landmines, and RDX and PETN have been used in terror plots in recent years as they can be hard to detect using sniffer dogs. Our test can quickly identify these compounds so we see it having a variety of applications from monitoring the waste water of munitions factories and military ranges to finding evidence of illicit activities."

The sensor is made of quantum dots, which are tiny light-emitting particles or nanomaterials, to which explosive targeting receptors are attached. As each explosive binds to the quantum dot, it quenches the light being emitted to a different degree. The distinct changes in colour are analysed computationally in a variety of conditions to give a unique fingerprint for each compound, allowing multiple explosives to be detected with a single test.

Senior author, Professor Ivan Parkin (UCL Chemistry), said: "Our sensor is a significant step forward for multiple explosives detection. Current methods can be laborious and require expensive equipment but our test is designed to be inexpensive, fast and use a much smaller volume of sample than previously possible. Although all of these factors are important, speed and accuracy are crucial when identifying explosive compounds."

The team plan to take it from the laboratory into the field by blind testing it with contaminated waste water samples. They also hope to improve the sensitivity of the test by tailoring the surfaces of the quantum dots. Currently, its limit is less than one part per million which the team hope to increase into the part per billion range.

Funding from the EPSRC was provided through UCL SECReT, a £17.5 million international doctoral centre for PhD training in security and crime science.