Scientists warn only 'simplified', degraded tropical forest may remain by end of century

A new and more dangerous phase of impacts on the world's remaining tropical forests is emerging, threatening to simplify the world's most diverse ecosystem including mass species loss, according to new UCL-led research published today in Science. 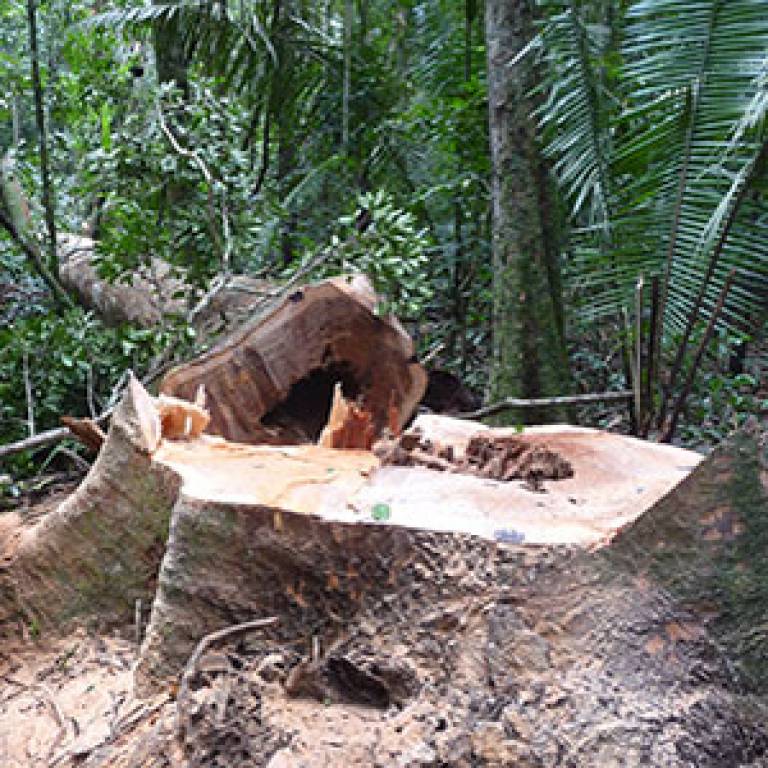 The impact of humans on these areas has been increasing for millennia and today more than three-quarters of the world's remaining tropical forests have been degraded by human actions.

The scientists identified three prior phases of expanding impacts, the first when hunter-gatherers moved into tropical forests and the second following the emergence of tropical agriculture, some 6,000 years ago.  Under both, the overall health of tropical forests was maintained.

Today, we live in the third phase, marked by much greater impacts, with distant decision-makers directing how land is used, including permanent intensive agriculture, often for soybeans or palm oil, frontier industrial logging for timber export, cross-continental species invasions, and early climate change impacts. The scientists term this phase the era of 'Global Integration', affecting even the most remote areas.

Lead author, tropical forest expert Dr Simon Lewis (UCL Geography and University of Leeds) said: "Earth has lost 100 million hectares of tropical forest over the last 30 years, mostly to agricultural developments. Few people think about how intertwined with tropical forests we all are. Many foodstuffs include palm oil which comes from once pristine Asian tropical forest, while remaining intact forests are buffering the rate of climate change by absorbing about a billion tonnes of carbon each year."

What is needed are unbroken areas of forest that link today's core tropical regions with forest areas about 4 degrees cooler, so as temperatures rise and rainfall patterns change species have a better chance of surviving rapid 21st century climate change.

Current trends look set to intensify without major policy changes, as global food demand is projected to double, over 25 million kilometres of road are predicted to be built by 2050, and climate change intensifies, ushering in a new phase of human dominance of tropical forests.

Dr Lewis added: "I fear a global simplification of the world's most complex forests. Deforestation, logging and road building all create fragmented patches of forest. However, as the climate rapidly changes the plants and animals living in the rainforest will need to move to continue to live within their ecological tolerances. How will they move? This is a recipe for the mass extinction of tropical forest species this century.

"What is needed are unbroken areas of forest that link today's core tropical regions with forest areas about 4 degrees cooler, so as temperatures rise and rainfall patterns change species have a better chance of surviving rapid 21st century climate change. We need to bring conservation in line with the reality of climate change."

The authors note that while deforestation and degradation continue, more optimistically, logged forest retains many environmental benefits, and marginal agricultural lands are being abandoned, which can return back to forest.

Dr David Edwards (University of Sheffield), co-author of the study, said: "Much biodiversity still remains in selectively logged forests, and can recover in secondary forests that grow on abandoned farmland.  There is abundant potential to incorporate these forests into global plans to make tropical biodiversity climate change ready.

"Despite their value for biodiversity, logged-over and old secondary forests are frequently threatened by conversion to species-poor agricultural plantations.  We urgently need to protect these human-impacted forests, especially in regions such as Southeast Asia where almost nowhere is left undegraded."

A suite of policy measures can help tropical forests survive, including giving forest dwellers formal collective legal rights over their land, which previous studies have shown is one of the best ways of preserving forests. A study of 292 protected areas in Amazonia showed that indigenous reserves were the most effective at avoiding deforestation in high pressure areas.

Most of the financial benefits of logging and plantation agriculture, such as palm oil, flow out of the forests. Ensuring local people have collective long-term rights over their lands would mean that benefits flowing from forest lands accrue to local people.  This can provide the beginnings of programs of 'development without destruction', tackling poverty while maintaining forests. This, the authors argue, provides human rights and conservation win-wins.

Dr Lewis added: "With long-term certainty of tenure people can plan, maintaining forests while investing in improving agricultural productivity without expanding into forested lands. Forest dwellers won't be perfect managers of forests, but they won't look for a quick profit and then move on, as big businesses often do.

"This is a pivotal year for the global environment. There are some good signs for the world's tropical forests, with the UN New York Declaration on Forests agreeing to not only halt deforestation, but also restore 150 million hectares of forest. However, there are ominous signs too, with the palm oil industry having driven the world's highest deforestation rates in South East Asia now gearing up to repeat this process across Africa.

"The Paris climate change talks in December are doubly important for forests and forest communities. The levels of emission cuts will be a critical factor in determining how many tropical forest plants and animals go extinct over the coming decades and centuries. The agreements on reducing deforestation, including durable finance, will be pivotal. The final test will be whether some funds for adaptation will include land-use planning to retain forest connectivity as the climate rapidly changes."