The Museu d'Història de Barcelona, situated in the glorious setting of the old royal palace (Palau Reial Major) in Barcelona in the Plaça del Rei is currently holding an important exhibition on medieval Jewish culture in the city. 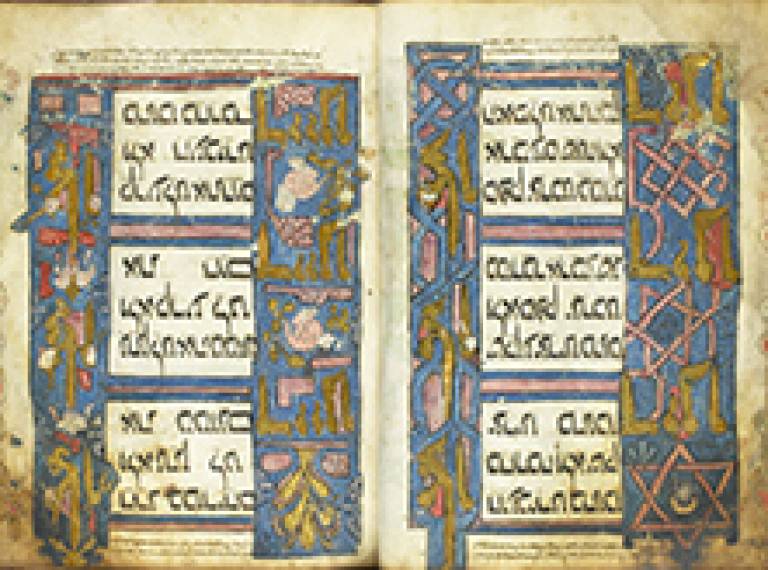 One of the items on display is the Mocatta Haggadah from UCL Special Collections.

The Haggadah ("telling"; plural: Haggadot) is a Jewish text that sets forth the order of the Passover Seder. Reading the Haggadah at the Seder table is a fulfilment of the Scriptural commandment to each Jew to proclaim the Jewish liberation from slavery in Egypt as described in the Book of Exodus in the Torah (Ex. 13:8).

Entitled Hagadàs Barcelona. L'esplendor jueva del gòtic català (Haggadot from Barcelona: the Jewish Splendour of Catalan Gothic), the exhibition reunites for the first time in more than six centuries an extensive selection of these splendid works of the Catalan Gothic period that were dispersed around the world when the Jews were expelled from Spain in 1492.

Translated from Catalan into English by Dr Ignasi Labastida from the University of Barcelona, the catalogue entry for the UCL Mocatta Haggadah reads:

The Mocatta Haggadah manuscript contains also the books Song of Songs, Ruth and Koheleth (Ecclesiastes). The text appears inside beautiful frames in blue, red, green and golden colours, with pictures of small hybrid animals and with micrographic borders in the margins. The document is attributed to Jacob the scribe, who perhaps illuminated it too. The author seems to know well other Haggadot, but he cannot reach the same quality of illustration as in other cases. Nevertheless, the Mocatta Haggadah stands out for its micrographic work that reproduces rabbinical homilies (Midrashim) and prayers. Jacob, active in Barcelona during the second quarter of the XIV century, worked, probably, on the Ryland's Haggadah and on the Catalan Mahzor, too.

In all likelihood, the Mocatta Haggadah was written for a Jewish family in the Catalan region. It probably remained in the Catalan area until the expulsion of the Jews from Spain in 1492. The item was probably then transported to Italy. In the nineteenth century, it came into the possession of Frederick Mocatta. On his death, it came via the Jewish Historical Society of England into UCL and is now permanently curated by UCL Library Services. Frederick Mocatta is thus one of the great benefactors of UCL Library Services and UCL houses one of the great treasures of medieval European Jewish culture and heritage.

The exhibition runs in Barcelona until 5 July 2015.