A man who was paralysed from the chest down following a knife attack can now walk using a frame, following a pioneering cell transplantation treatment developed by scientists at UCL and applied by surgeons at Wroclaw University Hospital, Poland. 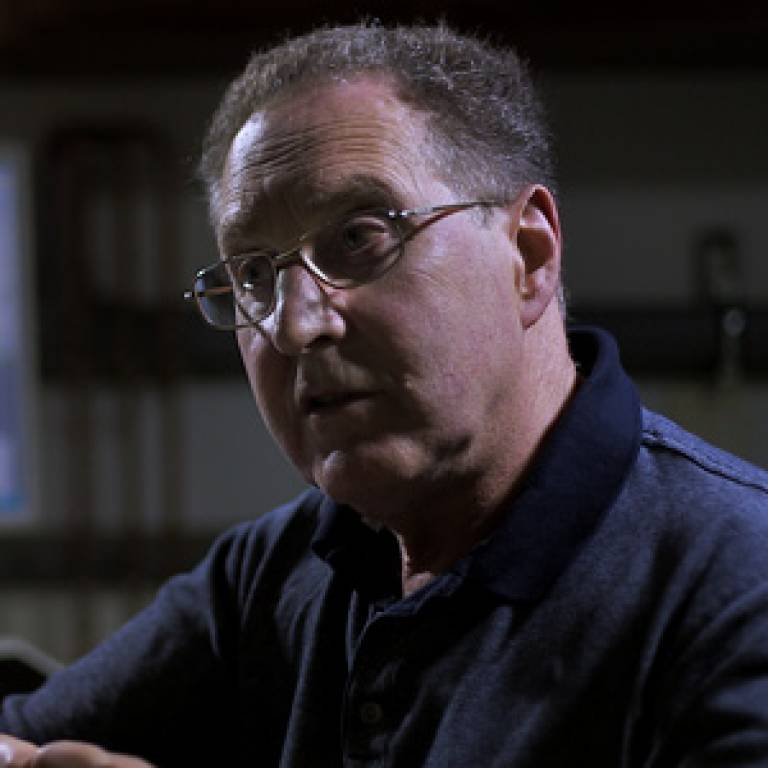 The research is published in the journal Cell Transplantation and was jointly funded by the UK Stem Cell Foundation and the Nicholls Spinal Injury Foundation. The UK research team was led by Professor Geoff Raisman, Chair of Neural Regeneration at the UCL Institute of Neurology.

The technique involved using specialist cells from the nose, called olfactory ensheathing cells (OECs), in the spinal cord. These allow the nerve cells that give us a sense of smell to grow back when they are damaged.

The patient, Darek Fidyka, was paralysed after suffering stab wounds to the back in 2010, leaving an 8mm gap in his spinal cord. He described the ability to walk again using a frame as "an incredible feeling", and added: "when you can't feel almost half your body, you are helpless, but when it starts coming back it's as if you were born again."

Dr Pawel Tabakow, consultant neurosurgeon, Wroclaw University Hospital, who led the Polish research team said: "It's amazing to see how regeneration of the spinal cord, something that was thought impossible for many years, is becoming a reality."

Professor Raisman first discovered OECs in 1985 and successfully showed that they could be used to treat spinal injuries in rats in 1997. He joined UCL in 2004 and has spent the past decade developing OEC spinal repair techniques for patients. Now, after decades of hard work, his research has helped a paralysed man to walk again.

The results achieved for this patient are truly inspiring, although further work is needed to determine whether the technique can be applied to other patients.

Professor Raisman said: "It is immensely gratifying to see that years of research have now led to the development of a safe technique for transplanting cells into the spinal cord. I believe we stand on the threshold of a historic advance and that the continuation of our work will be of major benefit to mankind. I believe we have now opened the door to a treatment of spinal cord injury that will get patients out of wheel chairs. Our goal now is to develop this first procedure to a point where it can be rolled out as a worldwide general approach."

Professor Michael Arthur, President & Provost of UCL, said: "This is an outstanding example of the true power of translational medicine, where great science in the form of successful cell transplantation is brought direct to real clinical need. The results achieved for this patient are truly inspiring, although further work is needed to determine whether the technique can be applied to other patients. The fact that this has occurred through international collaboration between scientists and clinicians is indicative of the way in which translational medicine is now a global endeavour."

Before the study, Darek had been in various rehabilitation programmes for 13 months after injury with no sign of improvement. As these programmes were incomplete, he was also subjected to an additional 8 month rehabilitation programme before the experimental treatment to check if he would recover without surgery, so-called 'spontaneous recovery'. The researchers say that the chances of a spontaneous recovery after this time are less than 1%.

Once the olfactory bulb had been removed, it was placed in a cell culture for two weeks to produce OECs. These were then injected into the spinal cord above and below the injury, and four strips of nerve tissue were taken from the ankle and patched across the 8mm gap. These formed 'bridges' for the spinal nerve fibres to grow across with the aid of OECs.

Three months after the surgery, Darek's left thigh muscle began to grow and after six months he was starting to walk within the rehabilitation centre with the help of a physiotherapist and leg braces. Now, two years on, he is able to walk using a frame although it is tiring. His bladder sensation and sexual function have also improved. He said: "I think it's realistic that one day I will become independent. What I have learned is that you must never give up but keep fighting, because some door will open in life."

Sir Richard Sykes, chair of the UK Stem Cell Foundation, said: "We are proud to be the major funders of this work. Our aim is to see potential treatments of this type get into the clinic faster. The first patient is an inspirational and important step, which brings years of laboratory research towards the clinical test bed. To fully develop future treatments that benefit the 3 million paralysed globally will need continued investment for wide scale clinical trials."

Professor Michael Hanna, Director of the UCL Institute of Neurology, said: "Spinal and nerve injury represent a major cause of disability for many patients and effective treatment strategies are lacking. The generation of olfactory ensheathing cells for use in promoting nerve repair after spinal cord and nerve injury has been a major experimental research programme by the team at the UCL Institute of Neurology over the past 10 years. I am delighted to see these very encouraging results in this first patient which represents an important and exciting milestone in this research programme."

The process has been documented in an exclusive BBC Panorama documentary, 'To Walk Again', broadcast at 22:30 on BBC One on Tuesday 21 October 2014.