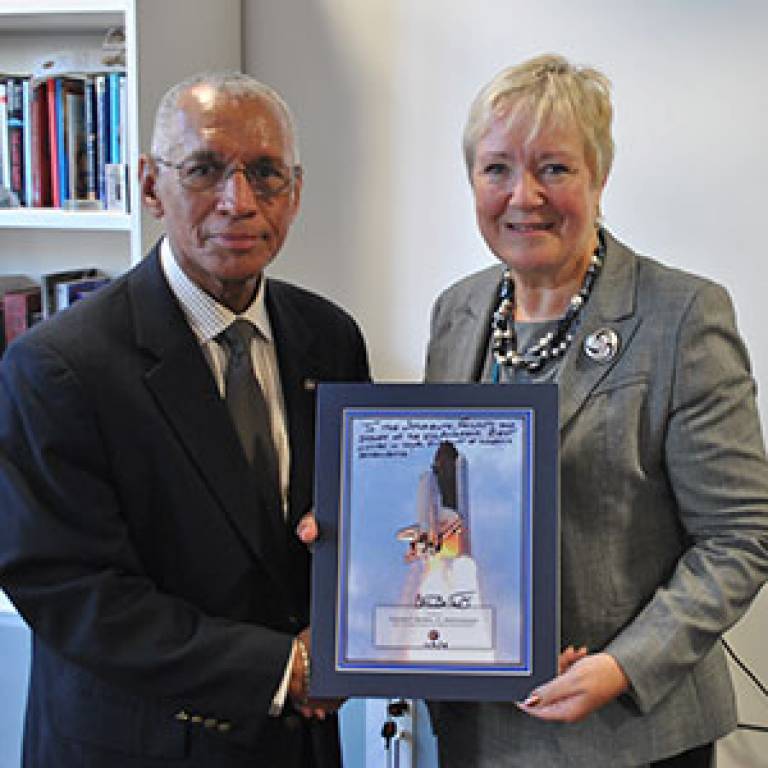 The visit, which was arranged by UCL Mullard Space Science Laboratory, saw Bolden share his experience of leading four space shuttle missions and his own personal journey as an African-American growing up in the segregated south to 200 Academy students.

"UCL has a long history of working with NASA that began shortly after its formation in 1958. Today, we have an extended family that includes the UCL Academy and it's wonderful to see the Academy being the focus for an inspirational visit by Charles Bolden. This is a very positive example of the value-added that comes from having such a broad community where we can work together for the benefit of the students."

Bolden, who is visiting Europe for high-level meetings with British and Italian space officials, spoke to students about the need to work and study hard and to not be afraid of failure. He also addressed the tyranny of low expectations faced by young women in science and engineering, encouraging those listening to pursue whatever career dreams they have.

Watching the lecture were two UCL Academy students working towards their GCSEs in astronomy, Edvin Hedzic and Nart Sllamniku. "He engaged with the audience, he wasn't just giving facts. It was really inspirational," Edvin said afterwards. "I think it was the best lecture I've seen."

Geraldine Davies, Principal of the UCL Academy, said: "It was an incredible experience for all of us present and I am sure that Charles has changed lives today - it was an honour to have been there".