This week the spotlight is on David Newsome, Projects and Proposals Manager, UCL Development and Alumni Relations Office. 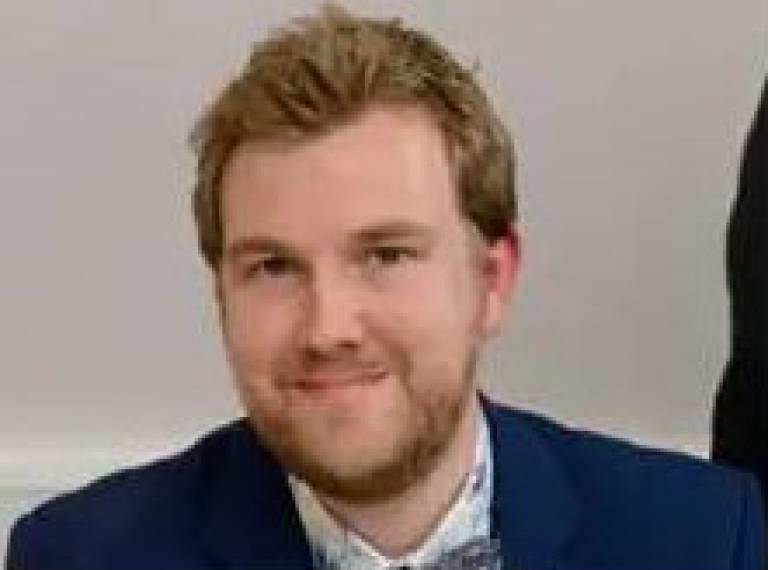 I am the Projects and Proposals Manager in the Development and Alumni Relations Office (DARO). The purpose of my job is to contribute to the definition, development and (fingers crossed) successful delivery of UCL's fundraising and supporter engagement campaign.

As my title implies, my job has two main areas, both related to 'fundraising propositions'. My work on projects is all about working with the academic community to understand priorities for UCL. A large part of my time in recent months, and for the immediate future, has been spent on 'framing' these within the wider Campaign. Sometimes this means working on things that we know we are not fundraising for right now, but for which we need to plan. This means I am often involved in things quite far upstream. When things move downstream, my work on proposals is about taking that knowledge and using it to develop communications for fundraising, whether cases for support (a brochure or 'vision' document) or specific proposals for particular supporters. DARO has another dedicated writer as part of this team.

My average week tends to involve dealing with long-term planning and short-term requests. As much as we plan, DARO needs to be agile and responsive when urgent matters arise. There's always something to keep it interesting.

I have been at UCL for a little over two years. Before that, I spent two and a half years in the Development Office at the University of Birmingham, having completed my PhD there - first as a fundraiser (responsible for raising money from charitable trusts and foundations), then focusing on developing the second phase of their Circles of Influence campaign. Those roles prepared me well for UCL, combining specific fundraising skills with experience of engaging the academic community and developing priority projects.

I am very proud to be working here, now. UCL is endlessly fascinating and inspiring, and I am part of an office that plays a very active role in supporting and enabling some of the amazing things that go on here.

At Birmingham, I worked very closely for several months on a major project for a new centre in the School of Education. The result of this was one of the largest gifts the University had ever received (the ROI was about 725:1). The most satisfying thing about this wasn't the big number, but the relationship-building it required. The Vice-Chancellor told the lead academic that he had to work with DARO, but he was unconvinced, and asked to "interview" us first. He was hard to please, but I quickly won his confidence, and we achieved a lot. My old Director described my work on that project as "a career maker". He was right; the day before the launch event, I was offered the job at UCL.

At UCL, I am proud of my role in developing a major project not long after starting. This involved extensive work with colleagues across UCL. Although we didn't get the money in the end the process built many bridges, and I was proud when I heard feedback from one of the Vice-Provosts. It was also great for getting to know people around UCL: the three of us who were most closely involved (from DARO, SLMS and Finance) are meeting for lunch this month. I'm proud of the work and the professional and personal relationships developed as a result. But it would have been nice to bring in the gift as well. Next time!

I am closely involved in defining the framework for the next fundraising and supporter engagement Campaign for UCL (what the Provost has called "the Campaign for UCL 2034"). This is a fascinating process, and one that allows me to marry creative thinking with UCL's (and DARO's) strategic planning. To date, we have defined some initial themes for the Campaign, have mapped them all against UCL 2034, have been through 1,000 pages of academic strategies to collate an initial long-list of possible projects, and we are about to embark on a consultation with the faculties to prioritise from the many options. It should mean that in the New Year we have a clear picture of what the institution wants to achieve, and how philanthropy can help us achieve it. We're not setting the priorities, but we are helping to shepherd UCL through the process.

The Provost wrote about this in a recent Provost's View, so if you get an email from me or one of my colleagues about this process, please do engage with us.

Album: one from my youth - Siamese Dream by Smashing Pumpkins.

Novel: Jane Eyre. My current favourite book isn't a novel, but a collection: The Hawk in the Rain by Ted Hughes. I can never ever imagine tiring of it.

I studied ancient history and archaeology, and one of my favourite jokes is one of the earliest I can think of, collected in the fourth century A.D. but conceived much earlier. It describes a man going to get his hair cut by a particularly talkative barber:

My wife. Trite but true.

Learn to drive. There was no good reason for putting it off for a decade!

Since 2009 I have written the Formula One race betting previews for the Racing Plus newspaper, and I have worked pretty much every weekend for the last few years helping out in my wife's tea room. I have washed up more china tea cups than most people see in a lifetime.

The Yorkshire Dales, in particular Wharfedale.