Spotlight on A. David Napier

This week the spotlight is on A. 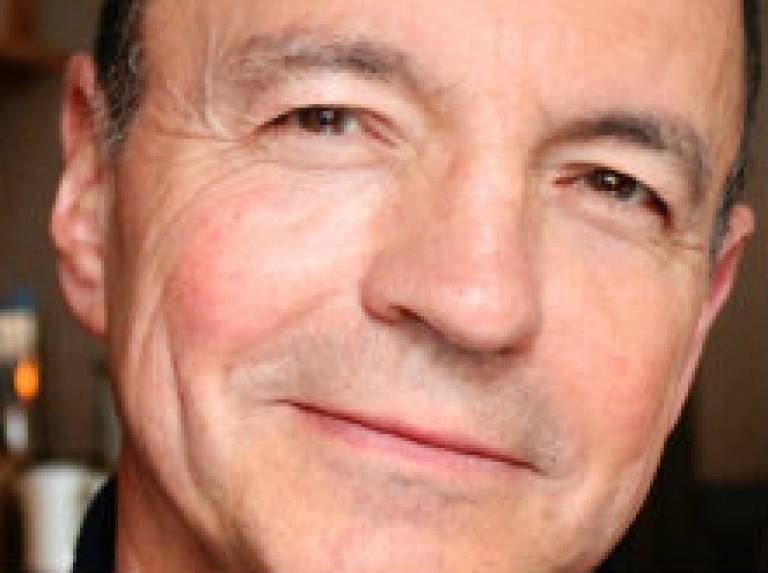 I am Professor of Medical Anthropology and direct the UCL Science, Medicine, and Society Network. This Network takes on new and emerging problems of current social importance. We focus on issues not owned by any particular discipline and make it our mission to develop communities of interest around those emerging problems. What a great job!

I came to UCL in 2004, though the cost of living in London means I have never really lived here. I went to Oxford in the 1970s, and because of Mrs. Thatcher had to write my DPhil in one year (she was chasing foreigners out). After that I spent a long time in the States at a few colleges and universities (mostly at Middlebury College in Vermont, but also at New York University, Johns Hopkins, and Harvard).

I came back to the UK a number of times for various 1-3 year fellowships at Oxford, and to start a Centre for Environmental Policy and Understanding there way back in in 1990. It was good training for what I do now. But my time at Oxford goes back to 1976 when I put down my paint brushes to study anthropology.

Pride is a dangerous idea because it so easily rubs shoulders with vanity. But I am happy that our work on torture survivors last year resulted in a grant to support two therapists for deeply wounded people who not only cannot work in the UK, but who are called criminals if they do.

As for academic accomplishments, I am happy to know that my arguments about the ancient influences of Asia (especially India) on so-called Western Civilisation have never been refuted, and also pleased by the fact that new work in biology confirms an idea I had 30 years ago that the human immune system is as much a 'search engine' of difference as it is a defence mechanism. We need others and their difference to survive. We need to adapt to difference as much as eliminate it. The idea makes me feel better, and, what is more, is increasingly verified by new discoveries in immunology and stem cell research. For me, this realisation is a source of encouragement about our future as a species.

I am the luckiest guy on earth because what the UCL Science, Medicine, and Society Network does is focus on new and emerging problems demanding cross-disciplinary cooperation. There could be no better job. We have worked on a new Lancet Commission on Culture and Health, on a project to assist irregular migrants who are victims of torture, on an initiative for social trust building, and most recently on a project that steers free legal advice to indigenous peoples and to migrants here in the UK who have no civil liberties.

We are also involved in a global project to slow the spread of diabetes-a disease that is crippling, more than any other illness, health systems around the globe. So, I am very privileged to find myself doing work that makes every day a wonder.

Music? Perhaps Mozart's Ave Verum, or Brahms's Alto Rhapsody sung by Janet Baker. Goethe's lyrics are just breath-taking, and Brahms was the master of setting music to the human voice and to instruments like the cello that mimic the range of what a person can sing. Then there is Bach's St John Passion with lyrics in German for the everyday congregations of his day. I was supposed to go to university on an opera fellowship, do I am much moved by choral singing. My father was a professional singer. I am also a lover of the electric guitar and could name a dozen people I admire immensely. Have you ever heard of Johnny A?

Film? Probably Tarkovsky's Andrei Rublev about the Russian icon painter. Being myself a videographer, I can pause the film anywhere and discover an image to remember. Also, unlike all of the poorly edited rubbish that passes for filmmaking, Tarkovsky makes scene transitions that are in themselves artful. I could give examples, but watch his work and you will understand. And then there is Kira Morotova, the Moldovan dissident filmmaker. She has never compromised her art and the results are magical.

Novels? That is difficult because I am a slow reader and, needing to work at reading, do not forget. So words matter to me. Melville makes me think more than almost anyone-Moby Dick is remarkable, but The Confidence Man is complex and a book I keep coming back to. Again, there are 40 or 50 names I cannot separate as most important to me. So I could never do one of those 'desert island' things. If you have not read the Japanese Catholic, Shusaku Endo, you will struggle to understand the relevance of religion to why we are today so culturally divided in spite of globalisation. I suggest his book, Silence, for starts. And I really like Hesse's work, especially Siddhartha, because people think it is about Buddhism when in fact it is a critique of the notion of achieved spiritual status (Christianity, Islam, Buddhism)-that is, a critique of all of the world's great missionary religions. And I do like reading Jung because he is so much about the modern person is search of a soul.

Why some people think of themselves as leaders. Is that the saddest of all jokes? I don't know. In most cultures I have studied, wisdom is something left to those who have lived. I realise that many who run for office-who want to be leaders or live under the bright lights of great achievement-do so because they have aspirations; but then there is a cynical view that says that most politicians achieve all of their campaign aspirations the day they are elected. If we had more respect for experience, we would surely understand that leaders need first and foremost to have lived. The ancient notion that a leader would never ask someone to do something that he or she had not done at least once, is violated every time I listen to inexperienced politicians. I lament that politicians are the least trusted people in the UK, but what would you expect? The joke is on them, but we bear its burden.

Why don't we forget the other questions and focus on this one? Because my list would not be one for a dinner table, but for a very large banquet. There are so many people I admire and for quite different reasons. But were I stuck with only a dining table and a few chairs, I would have to have some key people there, especially people I want answers from.

If the quality of the dinner conversation were predicated on the ability to be curious about a wide range of things, I would have to say that the name of Thomas Jefferson would be somewhere near the top of my list. Anyone even remotely familiar with his biography could offer pages of why this is a good choice.

Mark Twain and Herman Melville, the (only?) two great American philosophers would be there too. As for artists, the great Baroque sculptor, Bernini, no question about that. Though I got interested in T.E. Lawrence while at All Souls, I would have to say that I regret never having met Wilfred Thesiger before his death in 2003.

The great 1950s maverick photographer, W. Eugene Smith would be on this list.

And then there is my clansman, John Napier, the Scotsman who some 450 years ago discovered logarithms. I want to know just how he figured out that calculations could be made by reading numbers diagonally (the slide rule). I would also want John Maynard Keynes there because he understood intuitively why it is important for a government to step forward and assist the weak in times of economic instability. He called not doing so the 'paradox of thrift'.

But the person I would most like to have to talk to at dinner would be my late grandfather-doctor, chemist, pharmacist, inventor, numismatist, linguist, friend of Einstein. As my deceased father used to say of his own father-'the smartest man I ever met.' What a great privilege to feel such an emotion about your own father.

Learn more languages. The greatest compliment you can pay others is to have made the effort to appreciate and understand their ways of conceptualising the world. The Oxford philosopher, Stuart Hampshire, asks how we can say what a person is trying to do unless we know what that person expects to happen.  So, many values and expectations are expressed in shared categories of thinking. To get close to them means knowing a language intimately and being curious about what you may not know or be able to know.

Well, it is hard to say what surprises anyone. I cannot presume to know how anyone responds to new information. When I was 5 years old a car drove over my head and crushed my skull. So, my brain had to rewire itself and it has worked or not worked in its own unusual way ever since. If I judged what 'surprise' means by studying people being surprised by what I say, then telling them I was an artist for some 15 years and lived from that, and that I studied homeless people for about the same length of time-well those two seem to make people over dinner say, "really"?

I cannot tell you the names of specific places because that would make them no longer sacred. Everyone has to have secrets after all. I can say, though, that a few of them are near my camp in the Adirondacks of New York, and a few others amidst the industrial ruins of my hometown of Pittsburgh. And then there are the places in which I have lived and done fieldwork: Indonesia, Bhutan, India, Myanmar. I also love skiing and climbing, so there are many places that make me feel alive. The real matter is how you approach them. I like being able to answer the question of where I would like to be right now, with the answer, 'right here'. For doing so makes me feel like I may actually be the most fortunate person on earth-someone in a position, moment by moment, to lead a life fully realised.