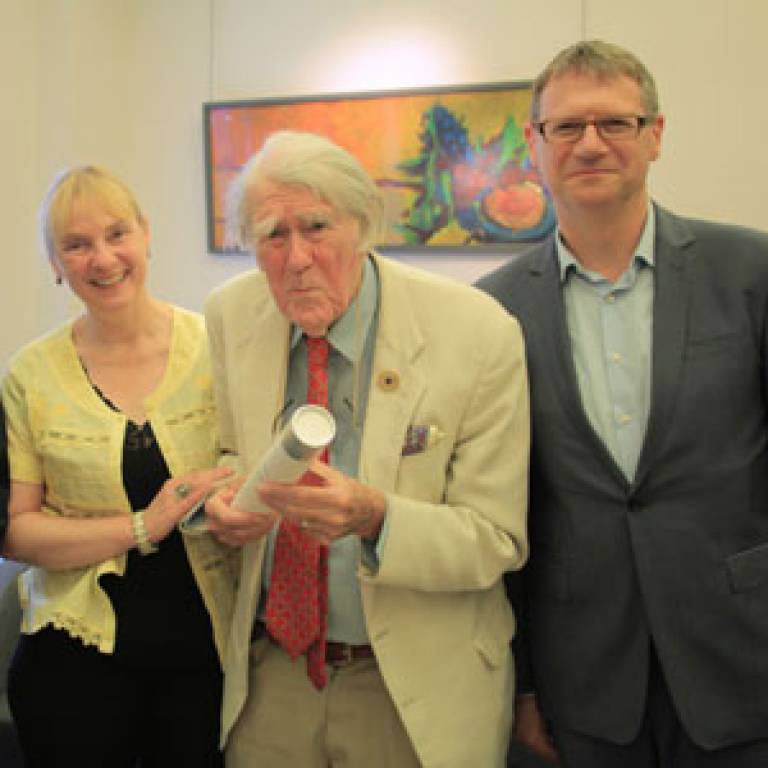 Captain Jerry (Raymond C.) Roberts MBE (18 November 1920- 25 March 2014) studied German at UCL from 1939-1941. Because the city in which he studied was being bombed by the nation whose language and culture he was studying, he completed his course at UCL at Aberystwyth. He did not, in fact, ever set foot on the actual UCL campus until his daughter Chao graduated, also from UCL German, in 2007.

Nevertheless, Jerry had strong ties to the Department and the University. He credited his German professor, Professor Leonard Willoughby, with starting his career as a code-breaker, because it was Professor Willoughby (a World War I code-breaker himself) who, impressed with Jerry's knack for the language and for solving puzzles, recommended him to Bletchley Park.

There, Jerry became one of the four founding members of the Testery, a small team that was assigned the breaking of the German High Command's most top-level code Tunny. Between October 1941 and the end of the war, Jerry and his small team broke tens of thousands of Tunny messages, some by Hitler himself. He thus became a central part of an effort that, according to then-General and later U.S. President Eisenhower, shortened the Second World War, which was costing 10 million lives per year, by at least two years.

When the Tunny code was declassified in the early 2000s, Jerry, already in his eighties, decided that he would spend his remaining years campaigning for proper recognition for the unacknowledged Bletchley Park code-breakers, most of whom had already pre-deceded him. For him, it meant that he never actually retired. Instead, he wrote, published, campaigned, participated in films, helped curate exhibitions, gave riveting lectures all over the country, and appeared in numerous interviews for articles and documentary films.

The first of these public appearances was a lecture offered, appropriately, at UCL-the place where, according to Jerry, it all began (a video of this lecture can be found below). The last was a book-length memoir, which he finished writing shortly before his death.

Jerry was honoured several times for his historic achievements. In 2011, he was presented to Queen Elizabeth II at Bletchley Park. In 2013, he was awarded an MBE and a UCL Honorary Fellowship.  The same year, he was also honoured with an investiture stamp. With characteristic modesty, he accepted all of these accolades as acknowledgment not of his own accomplishments, but of the work of his team-mates at Bletchley Park, most of whom died unrecognized, before Tunny was declassified.

Jerry remained, into his high eighties and early nineties, a terrific speaker who could hold large audiences spell-bound. His intelligence, humour, and generosity endeared him instantly to all who knew him, whether slightly or well. He leaves a wife, Mei, a daughter Chao, many friends, and countless admirers worldwide.